This Is Why You Shouldn't Mix Caffeine and Alcohol 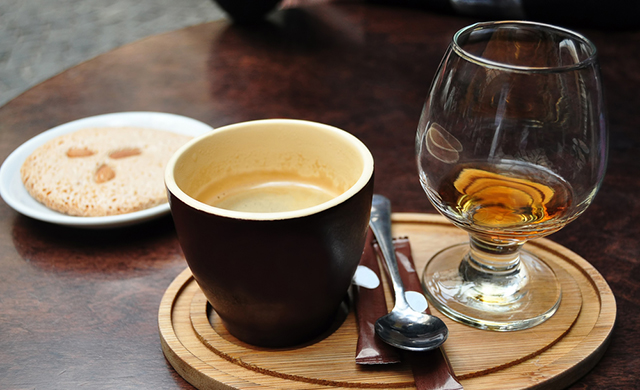 Back in the late 2000s, Four Loko—the caffeinated alcoholic beverage—was all the rage, especially amongst college students who wanted to get a buzz and a burst of energy at the same time. Unfortunately, mixing caffeine and alcohol wasn’t the best combo: It was eventually banned in some states, and it even caused the Food and Drug Administration to change its caffeinated beverage laws. But as you know, trends tend to repeat themselves, and now, newer companies are testing their luck by targeting coffee drinkers. And in case you couldn’t already tell, mixing caffeine and alcohol just isn’t good for anyone.

“The caffeinated alcoholic beverages that were popular in the 2000s combined alcohol and caffeine, as well as other stimulants. Their alcohol content was typically higher than beer, and the drinks were heavily marketed on social media and other outlets that are youth-friendly, often with images and messaging linking the beverages with extreme sports and additional risk-taking behaviors,” says Amy Gorin, MS, RDN, owner of Amy Gorin Nutrition in the New York City area. “In 2010, the FDA mandated that seven caffeinated alcoholic beverages could no longer be on the market in their current forms because there was no evidence to show that the combination of caffeine and alcohol was generally recognized as safe.”

Even with the dangers of Four Loko behind us, store shelves are still filled with potentially harmful beverage options. Instead of being branded as the perfect energizing alcoholic drink for a crazy night out, the newest products—such as boozy coffee drinks, including Cafe Agave’s buzzy Spiked Cold Brew—appear to feel much safer. But that doesn’t mean they are.

“It seems like the newer caffeinated alcoholic beverages are more focused on coffee drinks versus energy drinks,” Gorin says. “Because these beverages might lack the additional stimulants that were in some of the energy drinks popular in the early 2000s, perhaps the companies are hoping their products will be able to stay on the shelf.”

Whether the latest versions of the once-scorned products last on the market or not, it’s a good idea to know why they’re so controversial in the first place. And, more importantly, why drinking anything of that nature could cause serious harm to your body.

“Mixing alcohol and caffeinated beverages can be very dangerous. When the two are combined, the caffeine can cause you to feel alert—which can cover up some of the depressive effects of alcohol. This can lead to drinking more than you normally would,” Gorin explains. “And when we’re talking about mixing energy drinks and alcohol, the risk is even greater. The combination can increase blood-alcohol concentrations more significantly than when alcohol is consumed on its own. As well, the combination has been known to cause increased heart palpitations.”

Luckily, you don’t have to down dangerous, caffeinated alcoholic beverages to get your fix. There are plenty of healthy alternatives for upping your energy besides caffeine, starting with what you eat.

“Foods rich in protein, healthy fat, and fiber provide sustained energy. This means that the energy from the food will last several hours, versus shooting through you quickly,” she says. “Also, stay hydrated. Up to 60 percent of your body is made up of water, and you need to replenish that supply throughout the day to stay at maximum energy.”

Aside from healthy eating and drinking water, Gorin also recommends exercising your way to feeling more awake and alert throughout the day. “It can rev up your energy,” she says. “In a study in PLoS One, tired people ran three times a week for six weeks and reported that they felt less tired versus the people in the study who weren’t asked to exercise.”

And when it comes to drinking alcohol as safely—and as healthily!—as possible, here are a handful of tips straight from Gorin to keep in mind.

It’s tempting to go overboard on the alcohol—especially on the weekends or holidays—but there’s still a limit you should stick to in order to ensure your safety. “Women should aim to have no more than one drink a day, and men should cap their intake at two alcoholic drinks,” Gorin says. “What counts as a drink? A 5-ounce glass of wine, a 12-ounce glass of beer, or a 1.5-ounce shot of liquor.”

There’s no need to have drink after drink. Instead, be sure you’re throwing some non-alcoholic options into the mix, too. “If you’re planning to have more than one drink, order a glass of water or seltzer in between drinks so that you slow down and stay hydrated,” she says.

Yep, a beer is actually a good menu choice—especially when it’s pitted up to other options. Or if you’d rather pass on the brewski, just water down your liquor. “Versus a shot of liquor, a beer will take longer to drink, as will a vodka with tonic,” Gorin says.

If you’re going to do a shot, at least make it a flavorful one. “Fireball (cinnamon whiskey), for instance, has an alcohol content of 33 percent. On the other hand, straight whiskey has a minimum of 40 percent alcohol,” she explains. “So choose a flavored alcohol, which may be lower in alcohol volume.”

Instead of mixing alcohol with soda, lighten things up with something that doesn’t totally load on the calories. “Make your liquor go further by combining it with a low-calorie mixer, like a flavored seltzer or kombucha,” Gorin says.

If you’re planning on having just one drink, Gorin says to make it count so you actually feel satisfied afterward. And that means focusing on the quality of your alcohol. “Go with a drink offering a lot of flavor for not a ton of calories,” she advises. “This could be vodka or gin and club soda with lime, or even a really good aged scotch on the rocks. The water in the ice will help open up the flavors of the scotch.”

If you’re going to drink, you might as well make it something that offers some health benefits. “Wine contains flavanols, which can help your brain function optimally,” she says. “In one study in the Journal of Nutrition, older adults consuming the flavonoid-rich foods chocolate, tea, or wine performed better on cognitive tests.”

So there you have it. When you ditch the crazy caffeinated alcoholic beverages and get your fix the healthier way, you can still have fun. You just won’t end up putting yourself in danger because of it.

Lysol Disinfectant Approved for Use Against COVID-19: Here’s What Else Can Work

Is it Safe To Eat Outside During Coronavirus? What Health Experts Want You to Know About Dining Out