Associate Professor, Division of Lymphoma at City of Hope 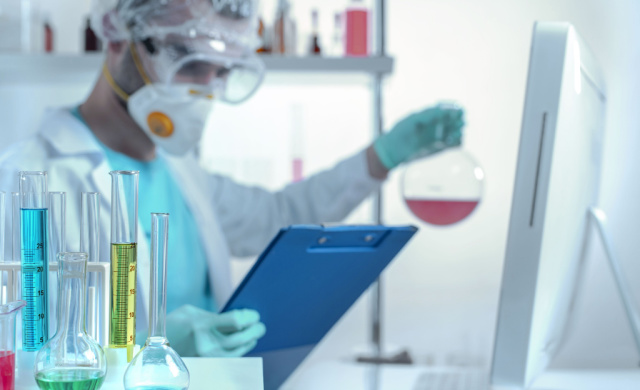 “Like any good first-generation immigrant child, I was told I could be a lawyer or a doctor or go into business when I grew up. I wasn’t excited about law.” - That’s how Alex Herrera describes his earliest career ambitions.

Since he liked both math and science, he started taking economics courses and also declared himself pre-med in college. While he was still a student, he volunteered as a Spanish translator in a medical clinic near school.

“It was really special,” he said. “Many of the patients were from Central America, and many of them didn’t speak English. I grew up in Miami speaking Spanish. To be able to be that link for them, I felt like such a vital part of the care. I found that really exciting and fulfilling. It was special to have this interaction and this relationship with people. It’s very intimate. The experience made me think: maybe this medicine thing is for me.”

Today, Dr. Herrera is a physician and a clinician who treats lymphoma patients and researches new treatments for Hodgkin and non-Hodgkin lymphoma. He is a hematologist-oncologist with City of Hope, a world leader in the research and treatment of cancer, diabetes and other life-threatening diseases.

“There are 80 different types of lymphoma. It’s our job to make sure we have clinical trials available for patients who have any of these different types. I help make sure our research operations and research infrastructure are working well and growing to meet the needs of our patient population.”

His research is also focused on understanding why certain patients respond to some treatments and not others, with the goal of personalizing care.

“In an ideal world, if you knew ahead of time what treatment would work in which patient, you can maximize the outcomes. There’s a whole range of things – called biomarkers – that we can use to understand how a patient might respond to treatments. Those markers might be age, medical problems, stage of cancer, or others. We’ve also moved on to understanding features about the cancer itself. We can do a blood test to understand more about the biology of the cancer.”

He collaborates to bring treatments or new cancer drugs from the lab into the clinic where he treats patients.

Dr. Herrera also serves as faculty and mentor for young researchers. He works with the lymphoma Research Foundation and the American Society of Hematology where, as a member of the diversity, equity and inclusion committee, he encourages and advocates for more diversity of patients involved in clinical trials.

“One of the things I love most about my job – it’s never boring,” he said. “I do so many things. Every day I could be seeing a patient one hour, then jumping on a call to develop a research strategy, then planning the integration of City of Hope with the Cancer Treatment Centers of America. I’m excited about all these different challenges. But fundamentally I see myself as a physician and a clinician who treats lymphoma patients. It’s starts from there.”

For anyone considering applying to medical school, he said you have do volunteer work and get some research experience to build your résumé. In addition to his earlier work as translator at the clinic, he also spent a summer working at a cancer biology lab in Boston.

“It was early in the days when researchers were starting to understand a little more about cancer,” he said. “I was lucky in that in all my early exposures to medicine, I was always really excited by what I was doing.”

After graduating with his bachelor’s degree, he took a year off of school to gain some clinical research experience. He spent a year doing breast cancer clinical research in San Francisco. He assisted with a study in which he helped correlate MRI images of tumors with biopsies of those tumors.

“It was really exciting to me that we were not only caring for women with breast cancer and helping them through treatments, but we were also finding new ways to improve their care and improve the outcome. It was neat to link my interest in patient care to cancer specifically. I got the bug.”

Dr. Herrera received his medical degree from Harvard Medical School. From there, he completed his residency in internal medicine at the Brigham and Women’s Hospital, before pursuing a hematology-oncology fellowship at the Dana-Farber Cancer Institute/Massachusetts General Hospital.

After medical school he did a residency at a hospital that had a strong program in blood cancers. So he gained a lot of exposure to leukemia, lymphoma and stem cell transplants.

“It just clicked. I loved it. It was a time when there were some of the first new treatments and new targeted therapies. I had an ICU rotation, and a patient with melanoma had received one of these immune therapies – antibodies that harness the power of the immune system. Cancers hide themselves from our immune systems, and these treatments take that camouflage away. It was fascinating to me that we could coax the immune system to do these really incredible things. We can put a patient with metastatic cancer into remission, where previously it might have been a death sentence.”

In his role as both physician and clinician (doctor and researcher), he gets to have long-term relationships with people. That’s important to him.

“Our intention is to cure lymphoma. Sometimes we can’t, but sometimes we can. Our treatment clinic is filled with a range of people – some we’ve known for years. Whenever young trainees come to the clinic, they’re blown away by the fact that as I walk through I am greeting people like old friends. We know so much about each other. I’m here to talk about cancer of course, but I’m also here to befriend them and to be vulnerable and share myself, too. Our patients are human, they’re people.”

Love the Job Itself, Not Just the Title

“It’s a challenging job because it’s incredibly demanding,” he said. “I take my kids to school, go to work, pick the kids up, eat dinner, and then work for three more hours at night to keep up with the research. Being a cancer doctor is an intense profession. It’s really important that you love this job for what it is. It can’t just be about collecting accomplishments. It’s hard work.”

But as we’ve seen from his own story, there are so many different paths for careers in medicine. Some will like the patient-care aspect, some will enjoy the scientific aspect, and others want both.

“I really hope people find something that they really love about it. Because it’s a long road, but a really rewarding road. It takes a lot of time. A lot of my friends who went into business got on with their lives seemingly sooner than I did. But medicine is an incredible profession. It’s a calling.”

Dr. Herrera has this advice for anyone who is worried about lymphoma. He said there are no screening tests for it and there are no clear predisposing exposures. If something feels wrong, go and see your physician about it. That’s really all you can do in advance.

Once someone has been diagnosed with lymphoma:

His patients know they always have him in their corner.

“The relationship you have with people experiencing cancer is very intense. It’s a privilege to be that calm in the storm and be able to guide someone through that process.”