Official research, arts and campus news from the University of Illinois at Urbana-Champaign News Bureau. 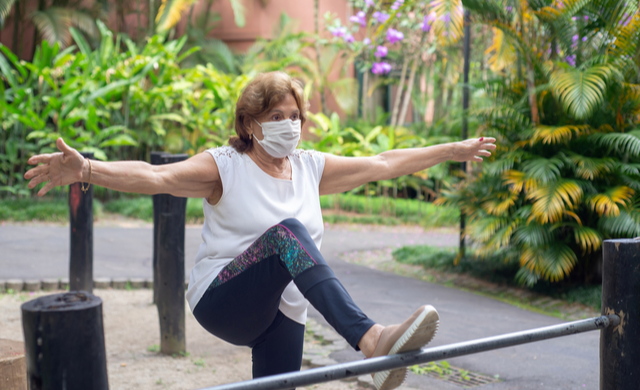 CHAMPAIGN, Ill. — Hispanic older adults tend to be one of the most sedentary populations in the U.S., further escalating their increased risks of various chronic diseases and disability.

However, a new study of 565 Hispanic older adults found that a culturally adapted exercise program developed specifically for this population showed promise at improving their physical functioning, but had less success changing participants’ mindsets that poor health is inevitable in later life

“Regardless of whether they were in the treatment group or the control group, participants showed significant improvements in their physical capabilities after 12 and 24 months compared with baseline,” Burrows said.

When the intervention began, most of the participants reported having at least two chronic conditions, such as heart disease, cancer and diabetes. About 84% were overweight or obese, and many showed moderate physical impairment in their lower extremities based upon their scores on a battery of tasks commonly used to assess older adults’ balance and mobility.

The average age of participants in the study was 73, and the majority were women.

According to Burrows and Hernandez, few exercise interventions have been tailored for Hispanic older adults, who may face multiple personal, social, environmental and cultural barriers to physical activity. These barriers may include financial constraints, unsafe neighborhoods, gender norms and a lack of programs with bilingual or bicultural instructors and materials.

“Many Hispanics have low expectations about how healthy they will be as they grow older, which can further diminish their motivation to remain active,” Hernandez said. “And the consequences of that inactivity are disproportionately higher rates of chronic health problems and disabilities that negatively impact their quality of life and ability to remain independent.”

The current study was part of the Caminemos! research project, which provided culturally adapted activity programs for Hispanics age 60 and older who were recruited from 27 senior centers in the Los Angeles area.

Many of the researchers associated with the project were co-authors of the current study, published in the Journal of Applied Gerontology.

Participants’ physical conditioning was assessed using the Short Physical Performance Battery, which tests a person’s balance using three different foot positions, records how quickly they can stand up and sit down again five consecutive times, and times them as they walk an 8-foot course on two occasions.

At baseline, both the control and the treatment groups’ average scores on the battery were below 10, which indicated moderate physical impairment in their legs, Burrows said.

Participants met weekly for a one-hour group exercise class taught by a certified instructor that targeted muscle strength, balance, endurance and flexibility. They also met once a week for a one-hour group discussion led by a bilingual health educator that covered either general health topics for people in the control group or an age-reattribution curricula that emphasized the benefits of physical activity in preventing or diminishing chronic health conditions often associated with aging.

After the first four weeks, the discussion and exercise classes met once a month for the next 11 months, then bimonthly for the final year of the program.

As the program progressed, people in the control group steadily improved in their performance on the battery tasks, while people in the treatment group improved during the first month, slightly declined over the next 11 months – and rebounded by the 24-month mark.

“We observed a trend among participants in the treatment group that they performed better on almost all the physical battery tests and ended the program with higher physical function scores than their counterparts in the control group,” Burrows said. “These improvements were found even after controlling for body mass index, preexisting chronic diseases or socioeconomic status.”

Unlike some prior studies, however, the current researchers did not find that the age- reattribution curricula conveyed any additional benefits for people in the treatment group, such as increasing their motivation to remain physically active or changing self-defeating cultural beliefs that conflate aging with poor health.

The researchers said the findings suggest that some Hispanic older adults are willing to pursue recreational physical activities that improve their physical conditioning when low-cost, culturally adapted fitness programs are available to them.

Additional co-authors of the study were social work professors Flavia Cristina Drumond Andrade and Lissette Piedra, and kinesiology and community health professor Susan Aquiñaga, all of the U. of I.; and Dr. Catherine Sarkisian of the University of California.

Nessa Steinberg and Shuo Xu, then-graduate students at the U. of I., also contributed to the research.