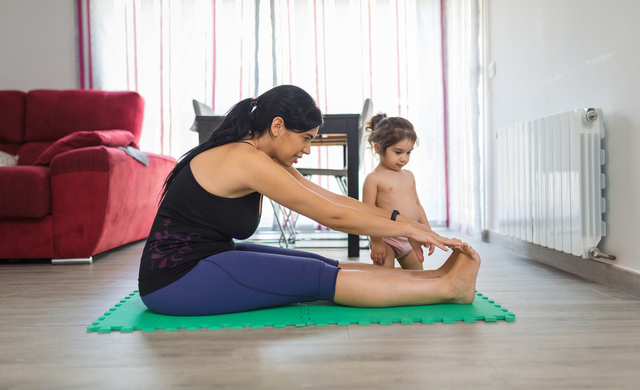 All the advice on postnatal exercise can feel like a LOT… Confusing or even contradictory studies, a lack of clarity about what and what not to do, and a pressure to do more than feels right all play a part.

So, we caught up with Peloton's Robin Arzón for her expert insight. As a head instructor for the infamous stationary bike brand (and treadmill aka Tread, with a Strength offering launching this year), an ultramarathon runner, author and mother herself, she’s a real fitness pro with first-hand experience of exercising postpartum.

When do you actually come under the postpartum bracket? Well, it's technically defined as only the first six weeks after birth, but studies show that recovery could take up to a whole year, so it's very much open to interpretation.

‘It’s critical we have an understanding globally of this fourth trimester’, Robin tells us. ‘Those few months when you're repairing your body, you're taking care of a small child and you're sleep deprived - you need to care for yourself as gently as possible.’

If you didn’t have complications with the birth and you feel up to it, the NHS says it's safe to do low-intensity exercise, like walking and slow stretching, as well as work on the pelvic floor and stomach, straight away. It’s recommended you wait until after your six-week postnatal check before starting more high-impact exercises, such as running or HIIT. As ever, though, this is very much dependent on you - how your pregnancy went, how your birth went, how your recovery is, everything - and is absolutely not a blueprint.

The most important thing is to listen to what your body is telling you, but if you're not sure, then seek help from your GP. Here's what Robin wants you to know.

1. Slowing down is a strength

If you’re someone who likes to give everything your all, the toning down that pregnancy and birth requires can be a struggle. But it really is vital.

And getting it right is a skill of its own.

‘I love intense workouts, but slowing down is a strength — vulnerability exhibits strength too,’ says Robin. And if someone who’s run 27 marathons can do it, we all can.

Being hard on yourself is never a good thing, and particularly not during the postpartum period. Your body has just done and is doing something huge and amazing, so focus on being kind and looking after it — as you are to those around you — rather than the things it’s currently not able to do. PBs, schmeebies.

‘I don’t believe it’s the time for putting our feet up, unless of course it’s medically recommended, as movement is good for mental health. I aimed to do 10 minutes, whether it was walking or breathwork — whatever I had access to and whatever was safe,’ says Robin.

‘Whatever point of postpartum you're in, you want to focus on what you can do rather than what you can’t do.’

Every body will be different, so just go at your own pace and don't compare yourself to others. Especially not celebrities.

4. The importance of breathwork is huge

We're not just talking about the breathing techniques that helped you during pregnancy and birth, here, but their connection to your core, which helps create a stable foundation for exercise.

‘Engaging your inner core, your abdominals and your pelvic floor is crucial,’ explains Robin. ‘It is the number one thing people should be thinking about doing before they get back into any intense workouts.’

If you’re experiencing diastasis recti or had a caesarean birth, it’s important you work on building up these muscles before getting back to your workout routine.

5. Nourish your body with the right food

‘When you're sleep deprived, and things are chaotic in your home and maybe in your mind, it makes it easier to reach for the wrong types of food’, she says. *Heads nod in unison*.

‘I tried to think: how is this nourishing my body when it is trying to heal itself? I tried to make good intentional food choices. In the beginning, I was drinking a lot of broth and foods that warmed from the inside out, and things with anti-inflammatory properties, like cherries and ginger — that was just right for me.’

Most people know to be conscious of the amount of caffeine they’re consuming when breastfeeding (no more than 200mg/day, FYI), but staying hydrating is also key.

‘Especially if you are breastfeeding! I was surprised about how thirsty I was. Hydration is good for your milk supply and, of course, for your health in general,’ explains Robin.

It’s recommended that nursing parents drink 16 glasses of water a day, so try and always have your water bottle next to you when you settle down to breastfeed.

7. Don’t be afraid to ask for what you need

This is something a lot of people, but particularly women and often new mothers, struggle with. A recent study by children's brand Stokke found 71% of parents were reluctant to ask for help during the first weeks after their baby being born. As a knock-on effect of this, 71% of mothers reportedly felt guilty for not being able to do something advised by parenting experts and 81% felt guilty about their parenting choices.

‘Ask for help,’ says Robin. ‘I don’t believe we should murder ourselves to motherhood, even if it is a small thing.’

‘My husband would make peanut butter and jelly sandwiches, so if I felt hungry when I woke up at 2am to breastfeed the baby, I had something there for me — I didn’t have to take those extra 5-10 minutes.’

Remember that even the little tasks can add up if you’re trying to do them all yourself. Think about what would be a help to delegate or ask others to do for you and don’t feel bad about being specific about how you’d like them done.

8. Seek out a community

As with pregnancy, early parenthood can feel isolating. You’re more tired than you’ve ever been, you’re doubting your decisions, you’re dealing with entirely new things non-stop. It’s both a marathon and a sprint.

‘Seeking out a community, whether that is online or locally, reminds you you are not alone,’ Robin says.

‘You have to give yourself a lot of grace, but also have a lot of grit.'

The NHS offers plenty of community services, including direction on parent and baby groups. It's a cliché, but a problem shared really is a problem halved.