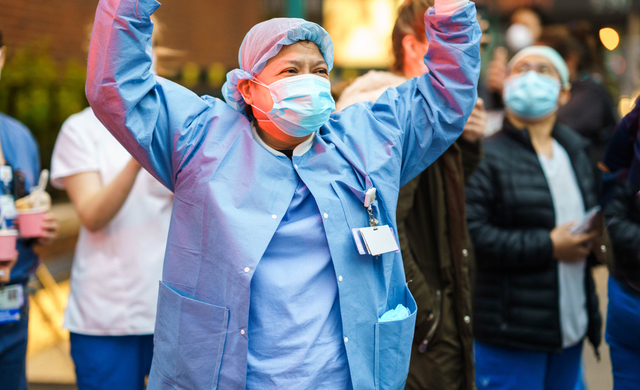 The “Hispanic paradox” could offer a model for civil society.

Researchers have puzzled for decades about why this is. Strong families? Supportive social networks? Religious faith and active churches? A hard-driving immigrant work ethic?

It’s a paradox because the disadvantaged normally live shorter lives. Hispanics in the United States endure discrimination, high poverty, lower rates of health insurance than both whites and blacks — yet they enjoy a life expectancy of 81.8 years, compared with 78.5 years for whites and 74.9 years for blacks.

This resiliency is now tested by the coronavirus, which has hit Latinos particularly hard: The Centers for Disease Control and Prevention reported this month that 33 percent of Americans testing positive for the coronavirus have been Hispanic, almost twice their 18 percent share of the population.

I came here to Cornelius, a town west of Portland with a large Latino population, to gauge the impact of the crisis, and the virus predictably has struck Hispanics hard. Many are undocumented immigrants and thus aren’t receiving federal relief payments. Yet what struck me, in keeping with the Hispanic Paradox, was how the community pulled together to ease the suffering.

Nicholas Kristof’s Newsletter: Get a behind-the-scenes look at Nick’s gritty journalism as he travels around the United States and the world.

Francis, 50, who does not want to be identified by her full name because she is not documented, lost her job as a receptionist because of Covid-19, but her 30-year-old daughter and her son-in-law took her in. “They may think it’s weird to have their mother-in-law living with them, but they’re not saying anything,” she said.

Meanwhile, Francis is volunteering for the community, driving boxes of food from a Catholic church to needy families. “My car overheats,” she said. “But I make it work.”

A Brookings Institution study found that since the start of the pandemic, one in six households in the United States has young children who aren’t getting enough food, so I asked Francis about hunger. She acknowledged that there must be hungry children but added: “If people knew kids were hungry, they would help. The community would step up.”

On the other end of the United States, Latinos in New York City display a similar resilience. Dr. Carmen Isasi, an epidemiologist at Albert Einstein College of Medicine who has studied LatinX populations, said that lately she has seen signs on Spanish-speaking churches offering food for the needy.

Scholars have been debating the Hispanic Paradox at least since 1974, when researchers found that the neonatal mortality rate in Texas was lower for people with Spanish surnames than with English surnames.

Researchers have found another paradox within the paradox: First-generation Latino immigrants tend to live longest, and their children — while better educated and earning more money — die earlier. Moreover, Latinos embedded in ethnic enclaves seem to do better than those who live in heterogeneous neighborhoods.

Part of the explanation may be that what many white Americans think of as “traditional American values” — an emphasis on faith, family and community ties — are disproportionately found among Latino immigrants, but then fade as their children assimilate.

“If we find that someone needs help, we help them,” Raúl González Hernández, who works in a plant nursery and has just recovered from Covid-19, told me. He said that others had helped him when he arrived from Michoacán State in Mexico, so he wants to pay it forward — particularly if the person needing help is also from Michoacán.

I’ve been long interested in the Hispanic Paradox because I grew up in a mostly white farm town in Oregon that has been devastated by lost jobs. As I’ve written, a quarter of the kids on my old school bus are dead from drugs, alcohol, suicide and other “deaths of despair.”

Latino families in the area have seemed more resilient because of their greater “social capital” — bonds of family, home region or church. Instead of being “criminals, drug dealers, rapists,” as Donald Trump alleged of Mexican immigrants in 2015, Latino immigrants often seem to be models of civil society.

“Our community, we rely heavily on each other,” Petrona Dominguez-Francisco, who works with a program called Adelante Mujeres that empowers women, told me.

Mark Hugo Lopez, director of global migration and demography research at the Pew Research Center, emphasized family ties as part of the basis for the paradox. “There’s a lot of support in my own family for those who are facing challenges, such as those who lost their jobs,” he said. “That’s how Latinos help each other.”

Another element may be faith and church connections. There’s some evidence that religious beliefs reduce behaviors like drug and alcohol abuse, risky sexual activity, violence and suicide, and a Harvard study found that church attendance or daily prayer or meditation correlates to better health and greater life satisfaction. Churches also offer a web of services and social connections that can buffer hardship.

Family and community ties also protect from a pandemic of loneliness in Western countries. One scholar has found that social isolation is more damaging to health than smoking 15 cigarettes a day.

This social fabric also isn’t a perfect shield from a pandemic. But it helps, and perhaps there’s a lesson in that for all the rest of us.