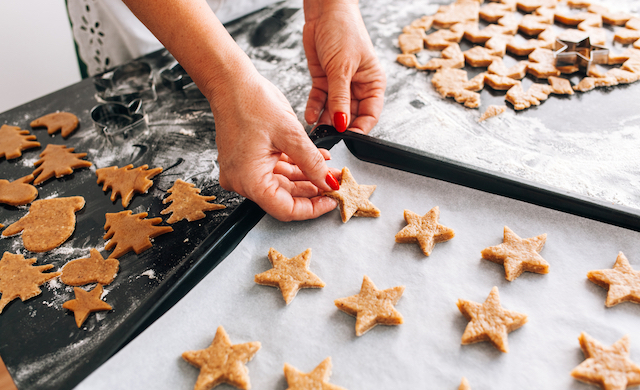 Between cookie exchanges, parties, and family dinners, chances are you're going to be doing at least a little holiday baking this season. But if you don't want to be spending more time in the bathroom than you do the kitchen, resist the temptation to nibble on raw cookie dough or lick the beaters on your mixers clean. Food poisoning is a real risk.

"Raw eggs. I know," you might think. But eggs aren't the only ingredient that can carry harmful bacteria.

“The common wisdom used to be that we shouldn’t eat cake batter and cookie dough because they contain uncooked eggs,” which can transmit foodborne pathogens, says Donald Schaffner, Ph.D., distinguished professor of food science at Rutgers University. “As it turns out, raw flour may be equally concerning—if not more so.”

How Flour Gets Contaminated

Research indicates that flour contamination often starts in the fields where grain is grown. Salmonella and E. coli, pathogens found in animal feces, can end up on grains in many ways, such as wildlife defecating on farm soil or irrigation water being tainted by livestock waste.

It's possible that the bacteria gets into the flour during wheat harvesting. "Whenever combines [machines that harvest grain] come through and churn up the wheat to separate it out for processing, they also can pull up some of the feces and other contaminants [from the ground],” says Samuel J. Crowe, Ph.D., Associate Director for Prevention in the Division of Foodborne, Waterborne, and Environmental Diseases at the Centers for Disease Control and Prevention.

“The contamination typically starts in the field, then sticks with the grains through the milling process,” says Schaffner. He adds that there isn’t usually a heating phase during flour processing, one of the more reliable methods of killing foodborne pathogens. “You don’t want to significantly heat flour before it's used, because that would make it unsuitable for baking," he says.

Within the last year, flour has been recalled multiple times due to possible contamination with salmonella or a dangerous strain of E. coli. For example, King Arthur Flour and Pillsbury issued recall notices this fall. Pillsbury flour was also recalled in March, and General Mills recalled Gold Medal flour twice, once in January and once in September. Raw flour and products containing it, such as cake mixes and packaged cookie dough mixes, have also been also been recalled in previous years.

Flour has a long shelf life, and all of the 2019 recalls include products with "best by" dates that extend into 2020. While they should have been removed from store shelves, if you're not a frequent baker, they may well still be in your kitchen.

If you have any of these flour brands on your shelves, your first step before you start your holiday baking should be to check your flour package for that brand's recalled lot numbers and dates (which you can find at the links above) to see if it's part of the recall. If it is, throw the flour away. Even in the absence of a recall, you should practice good kitchen hygiene habits when baking.

As with raw meat that’s tainted with foodborne bacteria, thorough cooking is the best way to kill dangerous pathogens in flour and eggs. And yes, that means not licking batter off the spoon or popping a morsel of cookie dough in your mouth.

“Consumers may not necessarily consider it a risk the way they would, say, raw chicken,” says Sana Mujahid, Ph.D., manager of food safety research at Consumer Reports, “but consuming any kind of raw flour can potentially lead to significant illness.”

Schaffner points out that the duration and high temperature of typical baking is enough to kill E. coli or salmonella bacteria. “With a burger, people who like it rare are at higher risk,” he says. “You don’t really have that problem with baking, as the vast majority of baked goods will be heated past an internal temperature, roughly 160° F, that would kill foodborne pathogens.”

That said, some recipes for truffles, icing, and cookies call for flour but don’t involve heating or baking. If the recipe doesn’t require the dish to be thoroughly cooked, skip it.

And again, if you have any recalled flour at home, don't take a chance and assume it will be fine if you simply cook it.

Even if you bake your treats thoroughly, working with flour poses additional risks. Below are common issues to watch out for:

Your hands. Raw dough can make you sick even if you don’t intentionally eat it. For example, kneading bread dough often leaves you with floury hands, which could be a problem if the flour is tainted. Wash your hands thoroughly with soap and water (generally around 20 seconds) after touching flour, before you touch anything else.

Arts and crafts materials. Websites devoted to pantry-based projects offer recipes for modeling clay or dough, spray glue, papier mâché, and ornaments with flour as the main ingredient. Mujahid recommends that you avoid making these mixtures with kids. Additionally, some restaurants give children balls of uncooked dough to play with, which is generally not a great idea.

Contaminated cooking and eating surfaces. Flour is light and powdery, and can easily spread around your kitchen. Even minuscule amounts of tainted flour can make you sick, so be sure that foods that will be eaten raw don’t come into contact with flour-dusted counters, cutting boards, plates, and the like. Wash those surfaces in hot, soapy water after using them. Be especially careful if you’re dredging meat or chicken in flour before cooking; it’s a messy process!

Containers you use to store flour. Thoroughly clean any flour containers before using them again. Make sure to wash out all nooks and crannies, because flour particles can linger in hard-to-reach places.

Other types of flour. It's probably not a good idea to eat raw dough or batter made with gluten-free flour mixes, cornmeal, chickpea flour, almond flour, or other types either. These, too, are meant to be used in cooked dishes.

Julia Calderone contributed to this story.

For the best holiday baking results, you need a good oven. According to CR experts, whether you choose a gas range or an electric one, you can find good choices for baking. If you're in the market for a new range, consider these options from CR's tests.

Bacteria is a serious threat when it comes to food preparation. On the "Consumer 101" TV show, host Jack Rico finds out how to cook a great meal without making your family and friends sick.

Consumer Reports is an independent, nonprofit organization that works side by side with consumers to create a fairer, safer, and healthier world. CR does not endorse products or services, and does not accept advertising. Copyright © 2019, Consumer Reports, Inc.