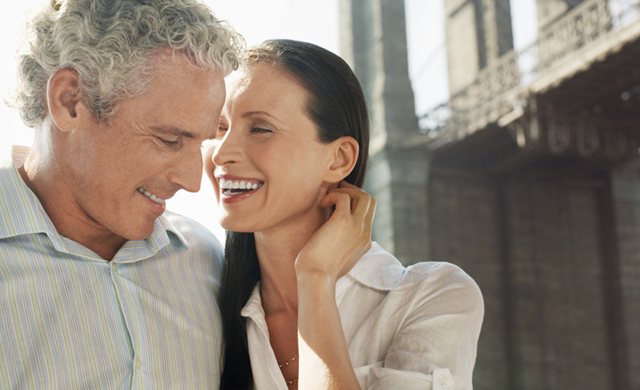 The aging generation is once again at the forefront, this time in cancer treatment, Alzheimer’s disease, and even emergency room care.

Kendra and Jay Jeffcoat are the quintessential baby boomer couple.

Kendra, 69, recently retired after a long and successful career as a college professor and administrator.

Jay, 70, who spent his college years as student body president at the University of California, Santa Barbara, protesting the Vietnam War, continues to work full time as a corporate attorney in San Diego.

In January 2013, Kendra was diagnosed with stage 4 lung cancer, which had metastasized in her brain. She never smoked, nor was she around secondhand smoke.

But as Healthline noted in November 2014, lung cancer among women who don’t smoke is on the rise.

Kendra endured brain surgery, several courses of chemotherapy, and a clinical trial for a cancer vaccine.

The joy of being over 60 is that a person has the experience and wisdom to deal with the realities of a crisis with joy, hope, and laughter.

She is now being treated with Opdivo, a new immunotherapy medication from Bristol-Myers Squibb that helps a person’s immune system fight cancer. It was approved last year by the Food and Drug Administration (FDA).

The emergence of immunotherapies is considered a game changer in the treatment of cancer. Kendra and her husband are pleased that this new treatment is available.

Kendra said she was shocked when she was first diagnosed, but age has given her the wisdom to deal with it.

“The joy of being over 60 is that a person has the experience and wisdom to deal with the realities of a crisis with joy, hope, and laughter,” she told Healthline. “Each round of chemo, radiation, vaccine therapy, and now immunotherapy, provides an opportunity for a roller-coaster ride from sadness to hope. You must be strong and surround yourself with optimistic people who love you deeply enough to tell you the truth. Being a baby boomer, I can see the ironies and humor of life, and thrive joyfully in the midst of whatever challenge I meet.”

Added Jay, “We have a great life. We’re both very active, I exercise every day. We spent three weeks in Ireland last year. We’ve been to South America. And we hope to take a river cruise in St. Petersburg, Russia, this year. These new treatments hopefully will allow us continue enjoying our life.”

The oldest members of the baby boom generation turned 70 this year.

But this group of nearly 75 million men and women born between 1946 and 1964 still see themselves as young and essential.

The boomers are determined to stay young, hip, and healthy.

Today, the generation that preached “don’t trust anyone over 30” is heeding Dylan Thomas' call to “not go gentle into that good night.”

They’re stubbornly raging against the dying of the light as they set out to prove they aren’t done just yet.

As a result, this generation is having a profound influence on healthcare in the United States with a unique set of demands, and challenges.

Boomers are the creators, as well as the recipients, of massive innovations and breakthroughs on multiple health fronts, from new, less toxic cancer treatments to an all new paradigm for American emergency medicine.

They don’t appear too eager to relinquish that crown.

But they’re clinging to a greased rope.

Popular culture and social media are now largely shaped and defined by millennials, the young men and women, ages 18 to 35, who now number 75 million.

Generation X, which is made up of people aged 36 to 51, is also projected to pass the boomers in population by 2028, according to the Pew Research Center.

Although there are plenty of misconceptions about boomers, perhaps the biggest one is the notion that they are healthier than previous generations.

In fact, a new United Health Foundation study of the health of senior Americans found that boomers will be entering their senior years with “higher rates of obesity and diabetes and lower rates of very good or excellent health status, putting significant strain on the healthcare system.”

In fact, the Trust for America's Health recently noted that 62 percent of Americans between the ages of 50 and 64 currently have at least one chronic condition, such as heart disease, because of obesity.

In an interview with Healthline, Dr. Dilip Jeste, professor of geriatric psychiatry and director of the University of California, San Diego, Center for Healthy Aging, explained why boomers aren’t quite as healthy as one might think.

“While smoking has become less common, physical activity has not increased,” he added. “On top of that, sodas, sugar-rich juices, and double cheese burgers are making the diet more unhealthy.”

Jeste said boomers also have higher rates of depression, anxiety disorders, and substance abuse than the previous generation. The precise reasons for this are not known, Jeste said, but there are several possible explanations.

“Baby boomers are more open to diagnoses of mental illnesses than the previous generations, and are more likely to seek treatment for them,” he said. “Talking about their own depression or taking Prozac or Zoloft is not as much of a stigma for them as it was for previous generations.”

Jeste said that primary care clinicians are also more open to diagnosing and treating these mental illnesses now than they were 30 years ago.

But Jeste added that boomers overall are optimistic and determined to stay young and live longer, and that for the most part this is a healthy way of looking at life.

“The main thing is that aging is not just physical. There is, of course, a psychosocial element,” he said. “We are all in part responsible for our own aging. Our center looks at aging in a positive sense. We try to help people enjoy the process. People do become more accepting as they age.”

When it comes to cancer treatments, baby boomers like Kendra Jeffcoat are at the “leading edge” of the precision or customized medicine paradigm, said Dr. Razelle Kurzrock, director of the Center for Personalized Cancer Therapy at the UC San Diego Moores Cancer Center.

“This model will see the introduction of a new way of doing clinical trials,” Kurzrock said. “This concept is applicable to all our clinical trials, since genomics tells us that each patient and tumor is unique. Boomers will see this new paradigm enacted and should be at the forefront of pushing it forward.”

Dr. Sandip Patel, assistant director of the Clinical Trials Program at Moores, added that baby boomers are a key patient group in the development of novel therapies that not only work better against cancer, but are substantially less toxic than traditional chemotherapy.

“These include immunotherapies and targeted therapies in particular, with a focus on developing approaches to personalize therapy based on each individual’s unique cancer,” Patel said. “A large majority of our cancer clinical trial patients at UCSD are in the baby boomer generation.”

[It’s] not unrealistic to think that the baby boomers will be the generation that experiences the most substantial transformation in treatment ever.

Patel said the hospital provides multidisciplinary care “to best help baby boomers fight their cancer on all fronts: supportive and palliative care, psychosocial support groups, as well as some holistic medicine approaches such as acupuncture.

This new wave of innovation in cancer treatment, Pavel noted, “is happening just as baby boomers are approaching the age in which they may need these novel therapies.”

Dr. Ezra Cohen, associate director for translational science at Moores, said it is “not unrealistic to think that the baby boomers will be the generation that experiences the most substantial transformation in treatment ever, with even cures where we never imagined.”

But Cohen added, “They are also the generation that has to help make this happen, and they can by participating in research, lobbying public funding sources, and providing support. It is up to all of us to end cancer.”

Are you paying more attention to your dog or cat during coronavirus quarantine? You're not alone, survey shows

Have I Been Cleaning All Wrong?

A close shave? Caring for your dog’s skin and coat during lockdown