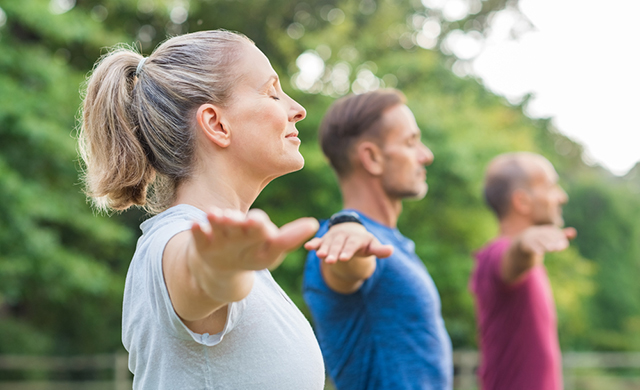 While you know exercise is good for you — you’ve heard so a million times — newer research on its far-reaching benefits is something anyone in middle age or older truly needs to hear. The latest evidence is showing that exercise not only strengthens your heart and may trim your waist, but regular physical activity can actually slow the aging process on a cellular level and potentially add years to your life.

Consider this: While federal guidelines now recommend at least 2½ hours every week of moderate intensity exercise (or one hour and 15 minutes of vigorous exercise), Harvard University researchers recently noted that as little as 15 minutes of physical activity a day can boost your life span by three years.

What’s more, a remarkable 2018 JAMA Network Open study found that not exercising increases your risk of premature death more than cardiovascular disease, diabetes and even smoking.

The latest research also gives us our first clues about why physical activity is so important — and it appears that it can actually make your cells biologically younger.

Brigham Young researchers looked at DNA samples of nearly 6,000 adults. They measured the lengths of study participants’ telomeres, the molecular caps at the end of chromosomes that tend to get shorter with age, and found that people with higher activity levels had longer telomeres than those who were sedentary. In fact, the exercisers had a “biological age” that was about nine years younger.

Another recent study found that men and women in their 70s who exercise regularly have the heart, lung and muscle fitness of healthy people 30 years younger. “We were shocked,” says Scott Trappe, the director of the Human Performance Laboratory at Ball State University and author of that study. “We assume that as you get older, you become frail and weak. But just looking at the muscle of older exercisers compared to younger ones, we couldn’t tell who was young and who was old.”

While Trappe’s study focused on men and women who have been exercising for decades, it’s never too late to start. Studies show that even people who start exercising in their 80s and 90s experience health and longevity benefits. A study just published in the International Journal of Stroke, for instance, showed that those who became fit later in life (ages 40 to 59) cut their risk of a potentially deadly stroke in half, while those who had been fit when younger and became unfit doubled their risk.

While any type of exercise appears to add to your longevity, here’s what the research shows about how to get the biggest longevity boost from your physical activity:

Find a partner (or a group)

A study published in Mayo Clinic Proceedings indicated that playing a team sport may be better at extending your lifespan than exercising solo. Researchers tracked about 9,000 people for 25 years and found that playing tennis added an average of 9.7 years to life expectancy, followed by badminton (6.2 years) and soccer (4.7 years). “They are all activities that mandate social interaction in a playful way,” says study coauthor James O’Keefe, a cardiologist at Saint Luke’s Mid America Heart Institute. “And play is nature’s remedy for stress.” The results also correlate to other research that shows social connections are strongly linked to longevity. Not to mention that if something feels like fun, you’re more likely to do it. If tennis isn’t your thing, O’Keefe says, consider pickleball, a fast-growing racquet sport that blends badminton, tennis and table tennis.

Don’t have 30 minutes to exercise? A raft of research in recent years reveals that any amount of physical activity — no matter how small — can have major benefits. “Just getting your heart rate up for a two-minute walk makes a difference in your health,” says Abby King, a researcher at the Stanford Prevention Research Center. King recommends looking for small daily opportunities to increase your heart rate: Take the stairs instead of the elevator, park farther from the store or take a quick stroll around the block after dinner.

Work up to an hour a day

While any amount of exercise adds to life expectancy, the more you exercise, the greater the benefit — up until about 450 minutes a week, says Alpa Patel, an epidemiologist at the American Cancer Society and coauthor of a study analyzing the link between physical activity and mortality. People who exercise that much — which equates to a little more than an hour a day — have a 37 percent lower risk of premature death compared with those who don’t exercise at all, according to Patel’s study.

The scientific consensus is that it’s best to include some vigorous activity as part of your exercise regimen. And the approach that has generated the most excitement when it comes to longevity is called high-intensity interval training, or HITT. HITT basically involves alternating between very intense spurts of action and exercise at a more leisurely pace during a workout. In studies, HITT has been shown to reverse the signs of aging on a cellular level.

Get up and walk around

The more time you spend sitting, research shows, the higher your risk of an early death — and that’s true even if you exercise regularly. A 2017 study that tracked the activity levels of 7,985 adults over age 45 found that those who had the greatest amount of sedentary time had almost double the mortality risk of those who spent less time in a chair. The good news? Taking a break every 30 minutes significantly lowers your risk, according to the study. Try setting an alarm to remind yourself to get up and walk around every half hour while you’re sitting, or get up and do something during the commercial breaks while you’re watching TV.

Work on your balance

Can you stand on one leg with your eyes closed for more than 10 seconds? One study in the BMJ found that 53-year-old people who had that ability had a lower risk of premature death. Good balance also can help prevent falls. Yoga and tai chi both improve your balance, but so can working a few key exercises into your daily life. Try standing on one leg while you hold onto the kitchen counter. Or steal this idea from Abby King: She stands on one leg every morning while brushing her teeth.

In the end, of course, what’s important is not just how long you live, but how well — and physical activity is essential for maintaining your overall quality of life as you age, King says. Older people who exercise are healthier, stronger, sleep better, perform daily tasks more easily and are less likely to experience cognitive decline.  So if longevity is really important to you, choose a workout you enjoy — and make sure it’s one that you will stick with.