Collaborative Leadership Will Bring You Bigger and Better Outcomes

Prevalent in modern education is the cognitive theory, based on Gestalt psychology, that “the whole is more than the sum of its parts.” Twenty-first century leadership requires this same kind of thinking. We need individuals, or groups, coming together to create something bigger than they could create on their own; bringing groups together and leveraging their collective knowledge, relationships and resources for bigger and better mutual outcomes That is, we need collaborative leadership that adds up to more than the sum of its parts.

Collaborative leadership is needed to change the future of healthcare. It has been used in the past to advance clinical and research insights, but as well, is needed to more quickly embrace the changing demographics of the US population – for example, awakening the biomedical and healthcare industry to the U.S. demographic shift (in particular the Hispanic population, which will represent nearly one-third of the population by 2050) – and to meet the future talent needs of the healthcare and biomedical industry.

Daunting as that challenge may seem, it’s one taking root at City of Hope and beginning to grow at the local level. Harnessing the power of collaborative leadership through our Diversity and Inclusion journey, City of Hope is helping to create increased collaboration between entities and has begun to transform our culture internally.  We believe a similar model of leadership collaboration can be embraced to achieve two primary external goals:

1) engaging the Hispanic community in our service area, which today is 46% Hispanic and represents 16 percent of the entire U.S. Hispanic population – to do more to address and prevent the health issues related to cancer, diabetes and other life threatening diseases; and

2) developing and strengthening a pipeline of Hispanics into healthcare and biomedical professions which will allow us to mirror the communities we intend to serve. These are relatively new objectives at City of Hope, but ones that have quickly built momentum.

Just two years ago the foundational infrastructure for Diversity and Inclusion was not yet in place at City of Hope, yet several important research, community, medical and employment-based diversity initiatives were already underway. Knowing how much Diversity and Inclusion matters, we saw an opportunity to bring people and independent groups together from different parts of the organization to talk about our mission and community. We learned that in the past, Diversity and Inclusion was previously viewed as an intangible initiative that did not have a set of protocols or singular leadership. Therefore, these initiatives were valued but housed in multiple places throughout the organization.

One of the first places we thought we could showcase our “D&I” efforts from around City of Hope would be at our first Annual Diversity Day Event. We called on our partners at Sodexho to create an international menu for our first Diversity Day event. We thought we’d serve food from multiple cultures and showcase our D&I efforts – but the response was nothing like we anticipated. With just a week and a half notice, 1800 people showed up from across our organization. The day was an eye-opening experience and striking reinforcement that, like heredity, ethnicity matters when it comes to health, our patients and our employees. Our employees spoke easily as to why diversity mattered to them and to the future of our institution.

With such a response, we knew we had to sustain our momentum and so we created a Diversity and Inclusion Council. The Council comprised leaders from across our organization. As a result, our diversity efforts have gone from being lots of fragmented independent small initiatives to a multiple-lane, super-highway – one on which senior leadership, employees, physicians, researchers, graduate students, and our suppliers and partners collectively embrace diversity as part of our culture.

Our next inspiration came in the form of a book discussion. “The Immortal Life of Henrietta Lacks” by Rebecca Skloot tells the real life story of a poor African American tobacco farmer whose cells were responsible for “launching a medical revolution and a multimillion-dollar industry” – after they were taken from her, without her knowledge or permission, by her doctors in 1951.

According to the author’s web site, these cells – known as HeLa cells – “became one of the most important tools in medicine, vital for developing the polio vaccine, cloning, gene mapping, in vitro fertilization, and more. Henrietta’s cells have been bought and sold by the billions” – and are still being used today in research labs around the world, including our very own labs at City of Hope.

The book raises questions of health disparities, experimentation on marginalized groups, bioethics, access to health care, clinical consent, privacy, and scientific discovery in the 1950’s. It has won critical praise and numerous awards, and it’s been widely reported that Oprah Winfrey is developing an HBO movie based on the book with Alan Ball.

At City of Hope, we convened a panel of our own scientific, clinical and community experts to talk about this story and its impact on the medical and research community as we know it today. Again, we were overwhelmed by the thought provoking conversations created on campus and the interest our employees had regarding this book. Hundreds of our employees had read the book, and hundreds more showed up to hear the panel discussion. We had such interest that we invited two of Henrietta Lacks’ own family members to our campus to share their story and to take questions from our employees. As a way to further their story, we engaged the Pasadena Public Library for a second panel discussion with the family members and again were overwhelmed when more than 200 community members, including elementary school to college-age students, showed up to participate in a discussion about the book.

As we reflected on the evening, the community members’ interests – so germane to City of Hope’s mission – we also began to think about the students’ interest in the sciences. Where did their engagement processes begin? What was the role of the K-12 system? What was the role of colleges and universities? These reflections led to an idea as to how we might use our “internal” model of leadership collaborations, externally, to network and ultimately collaborate with community stakeholders (leaders, organizations, school systems and other institutions) – so that we could further our Diversity and Inclusion efforts by engaging, developing, and strengthening a pipeline of underserved youth (including Hispanic students which today comprise 48% of our service area) into healthcare and biomedical professions, which would allow us to mirror the communities we intend to serve.

At our 2nd Annual Diversity Day, we saw groups connect in meaningful conversations, across 5 entities. It seemed we already had a diverse community eager to engage with us – and we had an opportunity to further evolve our efforts. The outcome led us to the creation of Diversity Resource Groups and additional opportunities to bring collections of people from across our organization together. Through individuals, or groups, collaborating between entities, we believed we could amplify our diversity goals and message, communicate more clearly, have more impactful conversations, and take our mission further into the community, drive engagement and strive to build a more diverse workforce than anyone or any one group could do on their own.

Our newest focus has led us to create an Enterprise Latino Strategy. It has allowed us to engage individuals from across the organization to understand how we can transform the future of health for this significant population. We have also formed a cross-functional teamwith afocus on developing a stronger pipeline in support of our future workforce. We have gathered leaders from Community Relations, K-12 Education, Graduate School, Talent Acquisition, Organization Development, Government Relations, Diversity and Inclusion Council and our Latino Diversity Resource Group to examine the possibilities of changing our future. As we continue on our Diversity and Inclusion journey, and see the possibilities of collaboration and integration of disparate efforts – we know we can come together to make greater impact and this is helping to transform our culture.

Collaborative Leadership can be applied within any company, across business entities and functions, and even across different companies and organizations to reach shared outcomes. It all starts with a few simple questions:

What would it take to make the impossible possible?

What opportunities can we leverage together for greater good?

In the process, new relationships are forged, mutual goals are realized and often exceeded, and the benefits of collaborative leadership over traditional hierarchy become clear.

On December 2nd, 2013, we at City of Hope will take a page from our own Leadership Collaborations: “Tips & Lessons Learned”, and are partnering with the Center for Hispanic Leadership. We are inviting our healthcare and biomedical counterparts, educational, business and professional organizations and community and government partners throughout the San Gabriel Valley and Los Angeles County to discuss “What a transformational win would look like and what it would take to make that possible” as it relates to “Strengthening the Hispanic Pipeline in Healthcare and the Biomedical Fields” – and begin to forge new external relationships toward the aspiration of the San Gabriel Valley becoming the “Country’s Generator of Hispanic Scientific Talent”.

• Look within your organization to see what people / partnerships would be valuable to advance a larger or more transformational outcome. Ask how you can build upon others efforts for better outcomes. Identify the adjacencies and interdependency points. If we align outcomes what alliances would be helpful?

• Make it a priority to engage in relationship building and networking outside of your organization. Talk to consultants, community leaders, college professors, colleagues from other institutions, or other adjacent industries, and ask if they have ideas on how to address your initiative and ask if they know others working on a similar initiative. Brainstorm great ideas from other industries and ask why not in our industry? Look for innovative game changers – search for solutions and redeploy them whenever possible.

• Collaborative leadership does not require permission. You will find that people are happy to help or share thoughts if you have the courage to ask for their help, thoughts and ideas. The goal is to connect the right people, leverage their unique knowledge, and help everyone navigate to bigger and better outcomes.

• Each arm of the company can help to create synergy and elevate the success of the other divisions. The goal is to strive for better mutual organizational outcomes and greater levels of success. 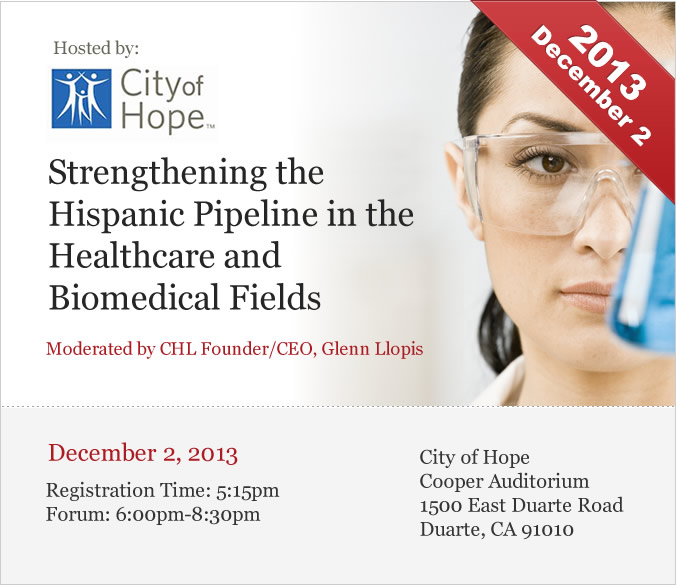 The primary purpose of the December 2nd gathering (the first in a thought-leadership series) is to foster a dialogue regarding building awareness around the opportunities in the Healthcare and the Biomedical professions field for Hispanics; to explore collaborations with existing employers, educational, business, and professional organizations as well as community and government partners throughout the San Gabriel Valley and Los Angeles County; and to develop strategic cultural messaging to educate Hispanics about how they can authentically lead and serve their community.

At City of Hope, we believe that collaborative leadership is about what’s possible and opening up avenues to partner with others.  While we look for ways to responsibly stretch our own organization, we are also looking for those who can help us solve new or mutual problems or advance an organizational solution for more effective outcomes.