Seeing Opportunities Everywhere Along a Winding Path to Success 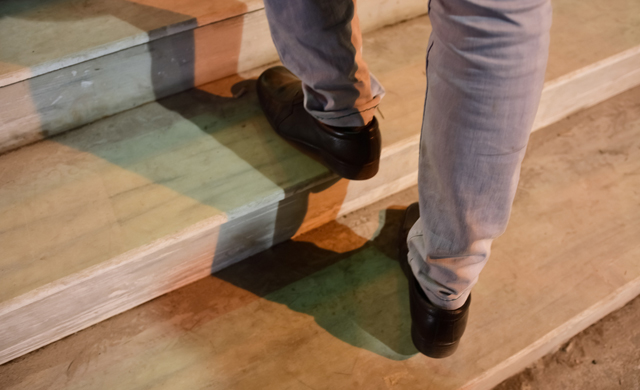 Hispanics and Latinos who mindfully tap one or more of the six elements of an “immigrant mindset” can attract greater opportunities for success. By nature, immigrants see opportunity everywhere; more easily adapt to changing conditions; pursue their passions to uncover endless possibilities; do their jobs as if they owned the business; form strong bonds to treat colleagues and friends as family; and willingly share that success with others to keep the prosperity cycle going. Born Leaders tells their stories.

Growing up, Rick García’s parents were always open-minded about their son’s eventual career choices. One thing that wasn’t negotiable, though, was “getting a piece of paper” if you wanted to go further in life.

“My mom would say, ‘if you want to be a sanitation worker, fine, but you need a degree that shows you know all about sanitation,’ he says. García, who holds a Ph.D., and three other degrees in nursing and healthcare, and now jokes that he’s “papering the walls.”

As the son of Cuban immigrants, García has enthusiastically – and literally – embraced his parents’ ideal of education as the path to higher success. The journey has led him to roles in everything from high-risk obstetrics to key leadership positions at Georgetown University, Bethesda Naval hospital, and on several state boards of nursing. Today, García serves as the Director of Nursing Education for the American Association of Colleges of Nursing (AACN) in Washington, D.C., placing him at the epicenter of the national discussion on nursing education policy and related.

García’s background has much in common with many first generation U.S. Hispanics and Latinos. His father fled the oppressive environment of Fidel Castro’s Cuba for Spain in the 1950s, and eventually moved to Miami, Florida for political asylum, where he met his wife, also a refugee from the island nation. As with many immigrants, his father quickly saw opportunities all around him, and soon began taking on odd jobs, such as laying tile and other handyman tasks. He eventually started a construction business. García’s mom worked in interior design and consulting, and later became a certified nurse’s aid.

While attending school in Miami, the young García became keenly interested in healthcare careers. His inspiration came from a high school health teacher who possessed a strong interest in revealing to her students many possibilities in medicine and related careers, in a very hands-on way, García recalls. During three years in her class, she went far beyond simply screening films or other educational materials, and reading textbooks. Instead, teacher Roberta Meyer encouraged students to roll up their sleeves and try many things – even cleaning teeth. Students were tested on their manual dexterity, for example.

“She had a dental model of upper and lower teeth. She’d hand you a mirror and an explorer. Did you have the manual dexterity to work in someone’s mouth? We could learn that in her class,” García says. “What she offered was like a professional skills inventory. It was a very specific and tailored experience.”

Over three years in her class, García and his classmates learned advanced CPR techniques – and even passed the advanced CPR test as given to potential new employees for one of the local city’s fire departments, and explored many other healthcare areas. The experience was invaluable, García says. And right out of high school, he began pursuing an AS degree in nursing from a college.

“I saw a role model in Roberta,” says García. “And I identified with nursing. I also enjoyed the nurturing aspect of nursing and helping people while at their most vulnerable or greatest hour of need.” The career options were alluring, as well. In addition to working in traditional hospital settings, García realized he could work and develop specialties in many areas of nursing, serve as an administrator, manager, educator, and take on other rewarding leadership positions.

“I realized I could also be a travel nurse or work in different settings and in different places,” he says. “The ability to move to different cities and also travel was attractive.”

García eventually earned a bachelor’s of science degree in nursing at the University of Miami. He continued school off and on throughout his career, and eventually made time for a master’s degree in integrated health systems management at Georgetown University. A doctorate in nursing research with a minor in nursing education from Barry University in Florida eventually followed.

But for all his successes and accolades, getting where he is today didn’t come in a straight line. The path has been filled with unexpected twists, life changes, and opportunities that García welcomed and embraced.

“While it’s important to have goals and a career roadmap, it’s even more important to be open to detours which life present. Welcoming and being open to take what life offers you, rather than seeing them as a delay or inconvenience, is important, ” he says. “When you are open to those life events, whatever they may be, you also gain growth, learning, and education.”

García’s goal to write his doctoral dissertation by age 30, for example, didn’t happen according to schedule. However, his career “delays” or unexpected turns also added skills and competencies that helped him succeed when he eventually began pursuing his doctoral degree.

“A detour can open a door to a different career track or add to what a career seeker has to offer a new employer,” says García, who learned from his immigrant parents how to quickly adapt to changing conditions. “It’s not all about the destination. It really is about the journey.”

García has followed those career sidetracks to many administrative and leadership roles. He served on the chair of the education and practice committees with the District of Columbia and New York State Boards of Nursing. He also taught nursing research and practice at New York University, Florida State University and George Mason University in Washington D.C., among others.

García’s leadership has also led to a few important career “firsts,” as well, including developing the Maternal-Child Case Management program at Georgetown University Medical Center for neonatal and pediatric intensive care units. Other highlights include being a founding case manager at the President’s Flagship Hospital at National Naval Medical Center in Bethesda, Maryland, where he focused on pediatric and adolescent case management.

Today the sum of García’s varied work experiences led him to the AACN, which focuses on academic nursing.

Through it all, García has always continued to participate in hands-on nursing.

“I’ve always kept my fingers on the pulse,” he says. “I feel strongly that practice informs my research, and my work in education policy. It’s difficult to convey to students what actually occurs in a practice setting unless you practice. I’ve always had that firm commitment to maintain my clinical practice.”

On some weekends, García takes the train from D.C. to New York to work at Mt. Sinai hospital as a nursing supervisor, basically a “house manager” on weekends and evenings. He enjoys the challenge, which he feels keeps his nursing skills sharp.

Hard work as a path to success

As a first-generation Cuban-American, García also learned that hard work could get you everywhere.

“Regardless of the cultural context, it’s a story that we all know. America is the land of achieving dreams and prosperity. You can easily take out ‘Cuban’ and insert ‘Polish,” he says.

“If you want to achieve a goal, you need apply yourself and work hard at it.”

Despite his busy schedule, in his free time García enjoys cycling, long walks, and outdoor exploration while catching up with family and friends. He’s also devoted to giving back. He was recognized as Nurse of the Year 2016 for his volunteer efforts with the Florida State Association of Occupational Health Nurses. He also looks forward to mentoring young people interested in nursing careers. And that’s as it should be, he says.

“You have to reach back as you’re climbing to help those coming behind you. Just because I may have had a rough time, doesn’t mean those behind me need to have a rough time. They’ll have their own challenges.”