American Association of Colleges of Nursing serves as the national voice for academic nursing. 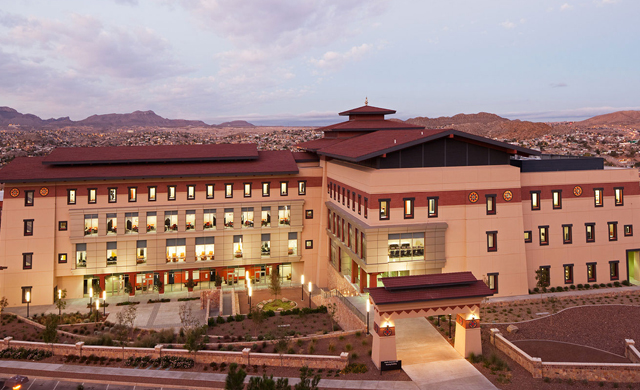 New nursing school graduates often face a steep climb in their first hospital jobs. To fully ready themselves for those positions, they typically must “shadow” an experienced RN for up to 18 weeks. That means more preparation time for novice nurses, and a hefty expense for healthcare organizations.

To create a win-win for both, the University of Texas El Paso (UTEP), in partnership with local hospitals, helped pioneer an internship program in which students spend their final semester interning at a local medical center. Soon after graduation, the facility hires them full time.

“The program is very competitive,” says Elias Provencio-Vasquez PhD, RN, Dean the University of Texas El Paso School of Nursing. “Our students must interview with hospital staff, and it’s an honor to be chosen. When our students do well, they are identified as up and coming leaders in their field.”

Hospitals save money on training, recruitment and retention. Students, most of them Mexican-American, gain advanced skills, greater confidence, improved leadership skills, and transition more smoothly into their first job. They receive a $3,000 stipend for program completion.

“It’s something we really want to grow at other area hospitals,” Provencio-Vasquez says.

Bordering the Rio Grande River and Juarez, Mexico, UTEP boasts a stellar record. It often ranks as the No. 1 school in the nation for graduating Hispanic nurses. About 80 percent of the student population is Latino. And an estimated 30 percent of UTEP’s nursing students are men, about double the national average.

The internship program began as a pilot effort between UTEP and Del Sol Hospital in 2011, as an alternative approach to hospital residency programs. In 2012 a $4 million U.S. Department of Labor grant designed to fast-track nursing candidates, continued to fund the program. UTEP now works with seven hospitals in El Paso and Austin. Rather than pairing a novice employee with an experienced RN for many weeks of guidance, the internship program allows students to gain most of that training while still in school. Hospitals significantly reduce training and related expenses, and new nurses typically gain greater professional confidence, job satisfaction and stability, program officials say. They transition smoothly into a full-time role at the hospital after successfully completing the internship and graduating from UTEP.

The program immerses UTEP student nurses in a single specialty based on the their preferences.Options include the emergency room, intensive care unit (ICU), cardiovascular ICU, neo-natal, telemetry and medical-surgical departments.

Up to about 60 students complete general hospital nursing orientation the first few weeks. That includes didactic and simulation training, and clinical orientation. Hospitals then assign each intern to a specific RN throughout the program, who typically works the same shifts, or three 12-hour days each week. Provencio-Vasquez’s department works closely to help ensure the training fits the student’s school schedule.

In addition to treating patients in this largely Hispanic region, students also see the full continuum of care those clients receive. For example, residents immersed in medical-surgery may also rotate through the hospital’s diagnostics and wound care centers. That provides them a view of the same patient before and after hospitalization. And students eventually spend an additional 100 hours working in outpatient care related to their specialty. A resident working in the cardiac care ICU may be assigned to a Healthy Heart program afterward.

“The goal is to give them knowledge of what the patient does after they go home, and what they need to do to be healthy,” Provencio-Vasquez says.

Within a few weeks following graduation, new nurses transition into full-time positions at the hospital within their specialty. After about two weeks of onboard training, they’re ready to work unsupervised.

The program also helps the hospital improve its retention of employees. After the first year, 100 percent of those participating in the pilot program still worked for the hospital, saving additional funds typically spent to recruit new employees.

Students reap other benefits, as well. They begin to learn how to communicate with physicians. It’s an area where new nurses often struggle, Provencio-Vasquez says. They build critical thinking skills and their knowledge base. They begin to learn delegation to others. It’s a foundation that can help students feel more self-assured in an environment with high expectations.

“It really gives students a head start with help in numerous areas,” Provencio-Vasquez says. “It builds confidence and leadership skills, and a higher percentage pass their state boards on the first try.” 96 percent of interns pass the NCLEX nursing boards exam on their first try.

Following graduation, many former participants have been singled out as leaders in their profession, often climbing career rungs more quickly, Provencio-Vasquez notes. It’s something of an unanticipated program benefit. Some now serve as team leaders, and department managers and directors, which usually requires at least about five years, he says, for some positions.

“Maybe it’s because the experiences they had during the internship and onboarding are so intense. Maybe it’s that they see themselves as leaders because of that experience,” Provencio-Vasquez says.

“But we are seeing many of these former students rise quicker.”