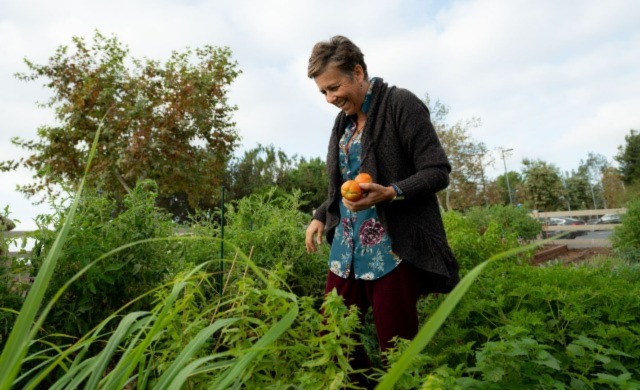 The seeds of good health are planted long before we start counting calories or blending greens for smoothies. Likewise, the seeds of a life mission are planted well before we know who we are or what we might contribute to the world.

That was certainly true for Nancy Clifton-Hawkins, who grew up among many different cultures and experienced the important role that culture can play in our health throughout our lives.

Clifton-Hawkins is director of community benefit for City of Hope, a world leader in the research and treatment of cancer, diabetes and other life-threatening diseases. Her job is to ensure that City of Hope is aware of and appropriately addressing the health inequities of the most vulnerable communities within its service area, which is primarily Southern California’s San Gabriel Valley.

This role emerged within healthcare because promoting health involves more than being responsive—meeting the needs of people who seek help once they’re sick. Being responsive is good, but being proactive is even better.

Clifton-Hawkins oversees the process of officially assessing the health needs of City of Hope’s communities every three years, and sharing those results with the public.

To help identify priorities in addressing those needs, she recruited a group of roughly 20 people to participate on a Community Benefit Advisory Council. The members represent various segments of the community—from pastors to counselors to public health professionals and more—and they review the findings and make decisions about how to address their community’s needs.

“They tell me what they need and what they want,” she said. “I facilitate, I don’t decide. The council members are community members, and they have a huge stake in what we’re doing. I can’t get this work done without strong community relationships built on transparency and trust. That’s the power of community.”

“The trajectory of my life is because of where I grew up,” Clifton-Hawkins said.

She grew up in Long Beach, California, just outside Los Angeles.

“A lot of people don’t understand what it’s like to grow up in Long Beach,” she said. “It wasn’t a white-majority community—we had so much incredible diversity. My high school had an international court, not a homecoming king and queen. I always felt honored and privileged to be able to live in such diversity. The heartstring of what I do and how I live in the world is through this multicultural lens.”

She attended college at California State University of Long Beach, majoring in sociology and political science. Her dad wanted her to go into aerospace, one of the big industries in the area at the time. But Clifton-Hawkins always wanted to join the Peace Corps. She still remembers the slogan: “The toughest job you’ll ever love.” She secretly applied and had all the materials mailed to a friend’s house. She was accepted, and lived and worked in Thailand for three years in her mid-20s.

“Living in Thailand is what showed me who I wanted to be and what I wanted to do,” she said. “I was an agricultural extension agent, working with a nutritionist in the northeast along the Mekong River. I saw so many people get hurt and die from things that were preventable. But they didn’t engage in prevention activities because of culture.”

She saw kids with third-degree burns because they fell into campfires that they used daily. She saw people suffer severe brain injuries from motorcycle crashes because they didn’t wear helmets. Women didn’t want pap smears because doctors were male.

To address that last one, she wondered: can we empower female community health workers, so there would be women who could do these pap smears?

Her experiences in Thailand showed her that the way to connect with and help people is by building community and honoring someone’s culture as it is, rather than trying to change that culture.

“You win people over by love and trust and understanding,” she said. “The focus should be: how can we preserve traditions that are beautiful and make people unique? How do we respect that and also help people be healthy? That’s what really got me going.”

She returned to the United States to pursue that vision, graduating from Loma Linda University with two master’s degrees: in public health promotion and education, and in global health. She planned to set off on a career traveling the world. But she met and married a fellow Peace Corps volunteer, and they started a family in Southern California’s Orange County.

She spent a few years at an Orange County healthcare agency before starting her own business providing public health program planning, evaluation and curriculum design as a consultant.

One day, sitting in Heathrow Airport in London, a job listing piqued her interest. It was for health education in a cancer institution, which turned out to be City of Hope. She ended up designing the system that defines, measures and accounts for all the work related to making sure City of Hope understands and addresses the needs of the community.

“I’m so lucky in the job I have to be able to build trust with the community,” she said.

One of her favorite projects has been working closely with the El Monte Union High School District and Eco Urban Gardens on a program that began with a garden at Arroyo High School in 2017, and has expanded (thanks to additional funding from Conrad Hilton Foundation) to include:

·       A half-acre farm on that campus, including greenhouse and aquaponic system

The investment now includes putting a garden or orchard in every high school in that district, and education pathways that include agriculture, the arts and entrepreneurship.

“The kids can see that agriculture and urban farming can be career pathways for them,” said Clifton-Hawkins. “We train kids to select the produce, price it and sell it at the farmer’s market. At an elementary school, we’re starting a kid-run farmer’s market. We subsidize food from a local community-supported agriculture organization.”

What started as a $5,000 grant from City of Hope is now a multi-million dollar project in the making. City of Hope’s own contribution is up to more than $100,000, and the project has attracted additional donors and sponsors. City of Hope also recently awarded Eco Urban Gardens a $25,000 Healthy Living Grant to expand their volunteer infrastructure to sustain the work they have been doing with the district.

“I get to go find these opportunities and create the partnerships,” said Clifton-Hawkins. “One of the most beautiful things about El Monte, and why I cherish this work, is it involves everyone from the superintendent all the way to the teachers, to those maintaining the grounds, to parents and teens and kids. It’s a very rewarding partnership where every stakeholder is involved and giving a voice in how things should be.”

From Long Beach to Thailand to the San Gabriel Valley, Clifton-Hawkins has certainly found her own voice in her unique ability to elevate the voices of others.