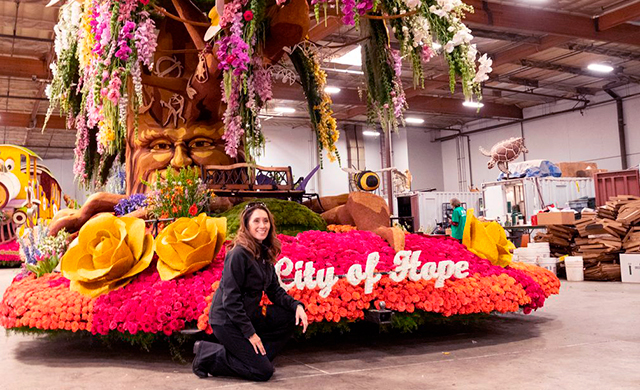 Think about the way you have felt after attending an inspirational event, taking a tour of a place you’re curious about, or listening to a rousing speech.

Chances are, the way you felt was no accident. There are people behind the scenes crafting and shaping those experiences to create a moment for you – a moment that will help you connect with that person or institution in a way that will be meaningful for you.

That’s what Gloria Preciado specializes in: creating a moment in time for people to get connected to City of Hope.

City of Hope is a world leader in the research and treatment of cancer, diabetes and other life-threatening diseases. As associate vice president and executive director of events and visitor services,Preciado leads a team in charge of stakeholder experiences. That includes everything from planning and givingcustomized tours of the City of Hope campus, to orchestrating high-impact events like fundraisers, grand openings and the annual bone marrow transplant reunion.

“We create a moment in time for an audience, so they can take a journey and, at the end of that journey, understand City of Hope a little bit more,” said Preciado.

Before Covid-19, her team gave more than 450 tours of the campus each year. And each tour is unique.

“Maybe you’re here to learn more about precision medicine, or maybe you need to learn about prostate cancer – each tour is tailored for the individual or group,” she said. “When we’re giving a tour, we’re ambassadors for the institution.”

She gives the same attention to detail no matter the type of event she and her team are planning. “The outcome will be the same: you will have gone on a journey and come to understand City of Hope.”

Preciado grew up in California’s Monterey County in a multi-ethnic and multi-lingual family. Her mother was born in the Bronx to parents who were originally from Puerto Rico, and her father is Filipino. One set of grandparents spoke Spanish and the other spoke Tagalog.

She earned a bachelor of science degree in psychology and a minor in political science from Santa Clara University. Her intention was to continue on to get a Ph.D. in psychology, specializing in traumatic experiences. She wanted to work for the United Nations, with children in war-torn countries.

“But I’m a very sensitive person, so I tend to take on how people feel, and that work would be very difficult,” she said.

After graduation, she moved to Washington, D.C. with $1,000 in her pocket, and lived in a women’s dorm on Capitol Hill while she interned for Leon Panetta in President Clinton’s administration. She thought she would ultimately build a career on Capitol Hill, but she ended up taking a job at Georgetown University, creating academic programs for at-risk teens.

After two years in that role, her mentor recruited her into Georgetown’s public relations department, where she planned and implemented media and public relations strategies, served as university spokesperson, and helped with crisis management and emergency response.

On September 11, 2001, the day hijackers flew a plane into the Pentagon just outside Washington, D.C., Preciado was part of the crisis team that had to ensure that thousands of people on campus were safe.

“That will always stand out for me, because at a moment like that you understand your character and the character of those around you,” she said. “You know this is life-altering and nothing else matters. You can’t change the outcome, but you can ensure that people understand that others care about them.”

Over 10 years, she kept moving up at Georgetown, was recruited to Harvard to manage social and political events for Harvard Medical School and for the dean of the School of the Medicine, then eventually moved back to Georgetown to become the university’s executive director of protocol and events for the university.

That’s where she discovered her true calling.

In that role, she led high-profile events in Washington, D.C., and internationally. These events offered her the opportunity to host the president and first lady of the United States, Cabinet members, foreign heads of state and many other VIPs on behalf of the university.

“President Clinton gave a speech at Georgetown and I was in charge of the command center – security, production and logistics for that event,” she said. “That’s when I discovered I have an affinity for this.”

Her team had to consider those events from every angle – from the logistical details to the aesthetics – and each event was unique. From those experiences, she learned a great deal and honed her skills for creating those impact-filled moments, no matter the audience.

“The moments that stand out in my career are the ones where it really was about ensuring that the public saw an institution in a manner worthy of that institution,” she said.

The best compliment she’s been given wasn’t about doing a good job. Rather, it was when someone told her she has an ability to maneuver in a crisis with intensity, ease and calm – and that she also brings out that sense of urgency and calm in others.

See Things As They Can Be

If you want a career creating experiences for people, Preciado said these are some essential skills to develop:

“Nothing about events is easy,” said Preciado. “Every single thing in that event has a particular purpose.

From the moment the speaker shows up on stage, to the message she or he is delivering, to the backdrop people see behind her or him, to the table cloths on the tables where people are sitting – everything is telling a story. You have to see things not as they are, but as they can be.”