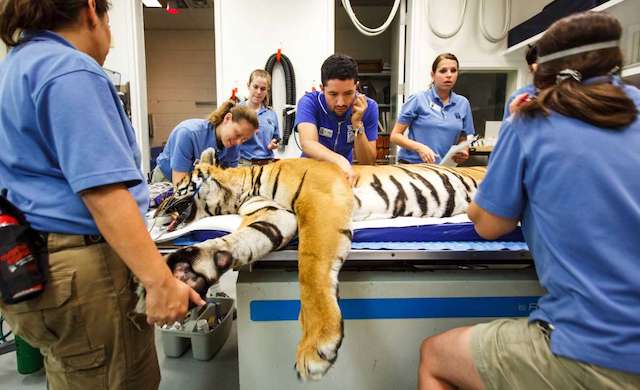 Bridging two worlds seems to come naturally to Benjamin Macuil-Rojas. Animals and people … the clinic and the lab … theory and practice … Mexico and the United States.

Dr. Macuil-Rojas is a veterinarian with Banfield Pet Hospital, the largest general veterinary practice in the United States with more than 1,000 hospitals in 42 states, Washington D.C., Puerto Rico, and Mexico. He serves as area chief of staff for the greater Phoenix area, which means that in addition to seeing patients, he is responsible for providing overall support to doctors and hospital staff so they can focus on what they do best: provide high-quality care to pets.

He always knew he wanted to work with animals. What he didn’t realize was how much he would also enjoy working with people. He’s thrilled to be able to balance the two.

As a child growing up in Mexico, he took care of his family’s many dogs, cats and even snakes. He also spent a lot of time with his father, who is a cardiologist, hearing his stories and sometimes going to work with him. Macuil-Rojas felt so at home in medical settings that, as he said: “Combining animals and medicine just seemed like a natural thing for me to do.”

In Mexico, students spend their fourth year of high school pursuing a particular career path. Macuil-Rojas focused on biological sciences, and then immediately after graduation he applied for the five-year veterinary medical program.

It’s not easy to get in. At Mexico’s public universities, tuition is free and competition for admission can be tough. Out of 30,000 applicants, he was one of only 200 to be accepted into the program.

“My time in school was wonderful,” he said. “This will sound like a cliché, but those were the best years of my life.”

Students spend the first three years on the fundamentals like chemistry, physiology, pharmacology and more. Then they spend the last two years choosing to focus on the subjects they’re most interested in. Those years combine in-class instruction with hands-on practice, so students really start to get a feel for what it’s like to be a practicing veterinarian.

He loved school so much, he experimented with just about every aspect of veterinary medicine you can choose. He started off focusing on small animals, like dogs and cats. Then he shifted to horses (equine medicine) for a bit, then wildlife medicine, then research.

He learned that he prefers small-animal practice, because he said it’s the most challenging and also the most rewarding.

“People want to do a lot for their pets, so the level of medicine you get to practice with small animals is so rewarding,” he said.

He earned his Doctor of Veterinary Medicine (DVM) in 2011 from Universidad Nacional Autónoma de México, in Mexico City. He practiced for about a year in Mexico and then did an externship at the zoo in Houston, Texas. While there, he helped with a new treatment that piqued his interest.

A tiger and a panther both had arthritis. The doctors harvested some of the animals’ fat cells, treated those cells and then injected them into the animals’ joints to help ease the symptoms.

“That was so awesome, it made me want to learn more about it.”

So he returned to his university in Mexico City and got a master’s degree in stem cell research. His work involved studying fat-derived stem cells from dogs. He investigated what the cells looked like and how they behaved, to learn if they might be useful in treatments for traumatic neurological problems. He said they found a lot of potential for using those cells to treat many different diseases.

While practicing veterinary medicine at a small-animal hospital and at a zoo, he saw on LinkedIn that Banfield Pet Hospital was looking for veterinarians in the United States. He decided to apply.

“I was looking to challenge myself in a different way.”

Moving to a new country is certainly a challenge. The entire process took more than a year. He had an advantage in that his school was already accredited by the American Veterinary Medical Association (AVMA). But he still had to pass the tests to get board-certified at the national level and licensed at the state level. Since he’d been out of school for about six years at that point, he prepared for those exams for half a year before taking them.

After the difficulties of waiting for the exam results, and the tedium of completing all the paperwork required for moving to a new country, he found himself relocating to Phoenix, Arizona, right in the middle of summer – with no car and having to walk to buy groceries in the 110-degree sun.

“More than a few nights I thought: I shouldn’t be doing this, I should go back to what I know. Moving to a different country is such a major thing. When you’re anticipating the move, you think it’s going to be so cool. When you’re faced with the reality of it, it’s so difficult. But it’s 100 percent worth it. It’s the best decision I ever made.”

“The hard work paid off, and my boss saw something in me,” he said. “She told me she liked the work we were doing and she wanted me to help mentor another doctor – a recent graduate. That was a great experience. It felt like that was my calling. Then I was promoted to chief of staff, and I started training doctors.”

He recalls the first time he saw somebody’s confidence rise in their ability to put their veterinary medical expertise to use – and how great it felt to have played a part in their development.

“Seeing people do what they do best, every single day – that’s extremely rewarding,” he said. “I had never done anything like that before. It makes me so happy to see the doctors I’ve mentored doing so well. It feels good to feel like you’re making a positive impact on someone’s life. It’s a beautiful experience. Seeing them successfully being doctors and making their own way, that’s what it’s all about. I love it.”

Dr. Macuil-Rojas is also  a member of the Latinx Veterinary Medical Association (LVMA), which works to address the shortage of Hispanic veterinarians in the industry.

“We need many more Hispanic veterinarians,” he said. “Not only because some people like doctors who speak Spanish. It’s also about that cultural connection. People feel more comfortable with others who have a similar background.”

According to the LVMA, language and cultural barriers can affect client education and patient care. That’s why Dr. Macuil-Rojas is working with the organization to increase the visibility of current Latinx veterinary professionals and inspire more students to become veterinarians.

“People don’t see veterinary medicine as a career option because when you’re growing up you don’t see a doctor who looks like you,” he said. “We need to get more exposure so people know we’re here and we’re an important part of this community. We want people to know this is a career that’s hard but also rewarding. This is a great career to consider.”

Whether or not you choose to work with animals, his advice applies:

“Whatever you choose to do in life, keep working hard. It’s worth it.”