New America Media is a nationwide association of over 3000 ethnic media organizations representing the development of a more inclusive journalism. 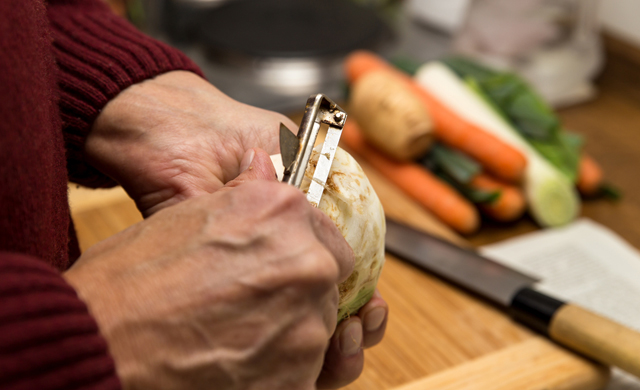 In the summer of 2015, an unusual story emerged that caught the attention of millions of people in social media: A North Carolina man of 81 called 911 and said: “What I need is someone to get to the grocery and bring me some food because I need to eat something.”

The man, who had arrived from the hospital after going through cancer treatment, could neither move nor stand. Overwhelmed with loneliness and hunger, he had no other option than to call 911.

To many, this case seemed to be a little extreme. But this incident reflects what researchers call “hidden epidemic” they say is happening in the United States every day: malnutrition in the aging population. The problem is especially stark for Latino elders.

According to reports presented at the Gerontological Society of America’s (GSA) Annual Scientific Meeting in Orlando, Fla., last month, more than a quarter of seniors are hungry or at nutritional risk. Also, researchers found that as many as two-thirds of older hospitalized patients are poorly nourished.

The problem with malnutrition is especially challenging for those 65 or older because it can trigger or worsen chronic diseases. Poor nutrition may increase the chances of infection, delay normal healing and result in longer hospital stays. Not only does poor nutrition affect the health and wellbeing of elders, but it can also create significant financial distress.

Medical bills for malnourished patients can more than triple compared to those who are well nourished, according to a 2012 study in the Journal of Clinical Nutrition.

Moreover, the cost associated with malnutrition among older adults is estimated to be $51 billion a year.

Being malnourished doesn’t mean being skinny. Anyone, regardless of the weight, is at risk.
“Malnutrition literally means ‘bad’ nutrition,” said Lauri M. Wright, a researcher, nutritionist from the Academy of Nutrition and Dietetics. “A big issue for our senior population is the lack of protein. Without enough of it, their immune system is not as strong; even medications cannot be transported to the body effectively. They may be getting enough calories, but if their diet doesn’t have enough nutrients, this is what happens.”

Lack of protein can cause a condition known as “sarcopenia,” which increases fragility, difficulty moving and the risk of falling, among other health complications.

Key factors causing malnutrition include isolation, dental disease or tooth loss, and diminished taste. Other facets are medications that decrease appetite, poverty and food insecurity from lack of access to healthy foods. Add to those such other complications as anxiety, alcoholism or gastrointestinal problems.

“Many times seniors have to make a decision between buying medication and buying food,” Wright said. “Then you look at some of the social issues like depression when someone loses a spouse, or maybe the man lost his wife and doesn’t know how to cook, or the woman lost her husband, who would always drive her to the grocery store.”

Malnutrition among Latino elders is an undeniable reality: It affects them more because they are more likely to be poor.

“Many Latinos elders have low income, so access to healthy foods may be a problem for them,” said Noel Chávez, associate professor emeritus and nutritionist at the University of Illinois, Chicago School of Public Health.”

She added, “For example, they may have mobility issues. Or you could have a situation where they got to the store, but don’t have enough funds to purchase healthy foods. They also may be reluctant to ask for help or services that they may be entitled to,” she said.

In healthcare facilities, especially hospitals, malnutrition hasn’t been addressed properly and there seems to be a serious lack of coordination among healthcare professionals about prevention and diagnosis, according to experts on aging at the GSA conference.

For instance, the Journal of Parenteral and Enteral Nutrition reported that U.S. hospitals have a disproportionately low number of nutritionists and in some cases patients are not being referred to nutritionists, or their nutritional plans are not integrated with their overall care plan.

The problem also may originate in medical schools. According to The Journal of the American College of Nutrition, nutrition classes aren’t required or considered of much importance in most medical schools.

In a recent study, four out of five professors in various medical schools reported that their students received inadequate nutrition instruction. Only one in seven internal-medicine residents say they feel adequately trained to give counseling on nutrition.

Is the problem of malnutrition among older adults being addressed? Not much, experts say. Only about two years ago, the Academy of Nutrition and Dietetics along with the American Society of Parenteral and Enteral Nutrition (ASPEN) recommended to U.S. healthcare professionals in the a new criterion to define, diagnose and document malnutrition, among other recommendations. “It is helpful to have this criteria because now we are all talking the same language,” Wright said.

Other professional organizations have taken similar measures, but there is a long way to go, according to experts at the annual scientific meeting.

“There is a financial gain to identifying and treating malnutrition because malnourished patients are more likely to stay in the hospital and be readmitted. From a hospital standpoint it really does save money to identify and treat malnutrition so they aren’t readmitted because every time they are readmitted it’s $11,000,” Wright explained.

Nationwide, the majority of state health departments have all sorts of programs to combat obesity but practically none of them have any program to combat malnutrition, especially among seniors.

In Illinois, for example, the State Department of Aging oversees and provides services to the senior population so they can live independently. In 2014, the department received $31 million for the Older American Act nutritional program, which provides food to seniors through services such as Meals on Wheels.

Still, the agency’s website indicates no plans or programs in place to prevent, treat or decrease seniors’ malnutrition. (This reporter contacted the department but didn’t receive a response by the time this article was published.)

“The issue of malnutrition is increasing because there are more and more older adults. We now know more about the role of healthy diets than we did before. But it is a broad range of factors, it’s a complex problem with all sorts of scenarios,” Chávez said.

“There is more that could be done,” she continued. “As a country we are getting older and some things are going to have to change or we’ll have all sorts of institutionalized people because they have lost the capacity to take care of themselves. Most communities as well as federal authorities need to be prepared to provide those support services,” Chávez added.

Sylvia Kingler, a nutritionist and consultant with the Hispanic Food Communications, said that people ages 50 or older should pay special attention to eating foods that contain calcium and protein. “Protein provides amino acids for our muscles, which help us move. Folic acid is also very important,” she said.

She recommends eating fish minimum twice a week because it provides omega 3, its low in cholesterol and fat. For older adults it is also important to eat nuts because since they get full quicker a small amount provides more calories and nutrients.

Most importantly, Klinger, who has 30 years of experience in nutrition, added that seniors must have annual checkups including blood tests, which are the best indicator of one’s overall health. “They help us determine and see which nutrients they need,” she said.

Marcela Cartagena wrote this article in Spanish for La Raza in Chicago, as well as this English translation, with support from the Journalists in Aging Fellowships, a program of New America Media and the Gerontological Society of America, sponsored by the Silver Century Foundation.