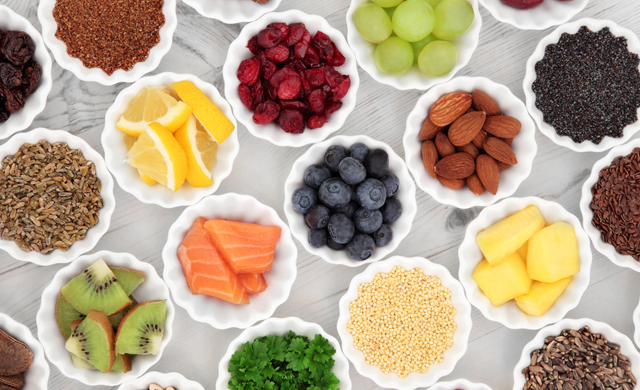 By Leslie Goldman from Parents Latina

By the year 2020, it's predicted that more than half of us will be diabetic or pre-diabetic. Here are 6 superfoods that will help you beat the odds.

- Get similar benefits from olive, avocado, and peanut oils.

- The science behind it: A little oil a day can keep diabetes away—so long as it's the unsaturated kind. Monounsaturated oils such as those pressed from almonds, olives, and avocados help lower total and LDL ("bad") cholesterol levels without negatively affecting your HDL ("good") levels. "Two out of three people with diabetes will die from a heart attack or stroke," says Barbara Allan, R.D. "So it's smart to choose oils that support a healthy heart." These oils are bursting with flavor, so a little bit goes a long way; aim for a 2-teaspoon serving.

- You'll want to avoid saturated fat and trans fat and anything with "hydrogenated" or "partially hydrogenated" oil on the label. Get cooking For homemade salad dressing, combine 3 tablespoons almond oil with 1 tablespoon citrus-flavored vinegar. Stir into 1/2 teaspoon Dijon mustard, and add a pinch of minced onion.

- Get similar benefits from wild mackerel, sea bass, and halibut.

- The science behind it: Not only is wild-caught fish an excellent source of protein, but its unsaturated, anti-inflammatory oils fight insulin resistance. Wild fish also contain more omega-3s than farm-raised fish do. The former eat sea plants and smaller fish; the latter are fed corn, which adversely affects the ratio of omega-3s to omega-6s. Some experts believe that this imbalance causes inflammation in human beings, opening the door for heart disease and diabetes.

- You'll want to avoid Atlantic salmon; most is farmed. Some chinook and coho salmon are farm-raised too.

- Get cooking: A spokesperson for the American Diabetes Association, Chef LaLa (aka Laura Diaz), is intent on breaking the cycle of diabetes in her family: Her parents, younger sister, and seven of her uncles suffer from the disease. "I cook healthy so my 9-year-old son can learn from my example," says the Mexican toque. She seasons wild salmon with a little parsley, chopped garlic, salt, and pepper. "Bring half a cup of water and half a cup of white wine to a boil, turn the heat to a simmer, and place the fish, skin side down, in pan. Cover and cook for about 10 to 15 minutes or until firm." Served with asparagus sautéed in olive oil and garlic, it makes for a delicious and healthy meal.

- Get similar benefits from chickpeas, lentils, and peas.

- The science behind it: In a recent study, people with type 2 diabetes who ate a cup of beans, lentils, or chickpeas daily saw improvements in their blood sugar levels and blood pressure. The theory is that fiber slows your body's absorption of sugar, improving your insulin sensitivity and keeping you fuller longer. One cup of black beans contains nearly 5 grams of soluble fiber, which reduces the absorption of cholesterol and fats into the blood.

- You'll want to avoid overcooking. "Too much heat destroys the fiber," says Rasa Kazlauskaite, M.D., an endocrinologist at Rush University Medical Center, in Chicago. Shoot for an al dente texture. Get cooking In a covered pot, soak dried beans overnight in fridge. Then simmer about an hour with garlic, onion, celery, and veggie broth. Serve with brown rice. This dish is full of magnesium; diabetics are often deficient in magnesium, which fuels enzymes needed to process glucose.

- Get similar benefits from broccoli, nuts, whole eggs, and whole-grain cereals? and breads.

- The science behind it: "Sweet potatoes contain chromium, which stabilizes blood sugar," explains Cleveland Clinic endocrinologist Betul Hatipoglu, M.D. "It might also improve diabetes by helping your pancreas regulate the amount of insulin it releases." Dr. Hatipoglu says that most overweight Americans are chromium-deficient, leaving them prone to high blood sugar and elevated cholesterol and triglyceride levels, which increases their risk for diabetes. Low chromium levels are also often behind sugar cravings, so you can satisfy your sweet tooth while doing some good for your body.

- You'll want to avoid cheese. Though rich in chromium, cheese has too much saturated fat, so enjoy it sparingly. ?

- Get cooking: Make oven fries. Slice peeled potatoes into strips, toss with olive oil and rosemary, arrange in a single layer on a cookie sheet, and bake at 425°F for 30 minutes or until golden and crispy.

- The science behind it: We know, we know. What can't kale do? In this case, the ruffle-edged rock star helps your body use insulin efficiently, keeping blood sugar under control. "Leafy greens are nutrient-packed, low in calories, and rich in anti-inflammatories," says Dr. Hatipoglu. Greens promote insulin sensitivity and might offset chronic low-level inflammation in the body. (Inflammation is thought to pave the way to type 2 diabetes, as well as complications.)

- You'll want to avoid sautéing them in pools of butter or walnut oil, which negate some of their benefits. Try canola oil, olive oil, or almond oil instead.

- Get cooking: Ditch the potato chips for our delicious kale-chip recipe instead. In a large bowl, toss 10 cups kale leaves (stems removed, torn into small pieces) with 1 tablespoon olive oil and 1/8 teaspoon salt. Place on baking sheets in a single layer, and bake at 300°F for 25 minutes or until crispy. Remove from baking sheets with a spatula and serve.

- The science behind it: Often associated with pancakes, this nutty whole grain has a "secret diabetes weapon" called D-chiro-inositol (DCI), a chemical compound that enhances insulin's sugar-lowering effects, Dr. Kazlauskaite says. Buckwheat also has fiber and magnesium and is low in calories. DCI is rarely found in other foods, but whole grains such as amaranth and farro are good carbohydratesfor those with diabetes.

- You'll want to avoid dousing your buckwheat pancakes in butter and syrup. Sorry!

- Get cooking: Substitute Japanese soba noodles for your regular pasta; they're made with buckwheat. When baking muffins or bread, replace half of your recipe's white flour with buckwheat flour, or use it instead of bread crumbs to coat chicken.