Psychology magazine published every two months in the United States.

New Evidence of the Value of Music Therapy 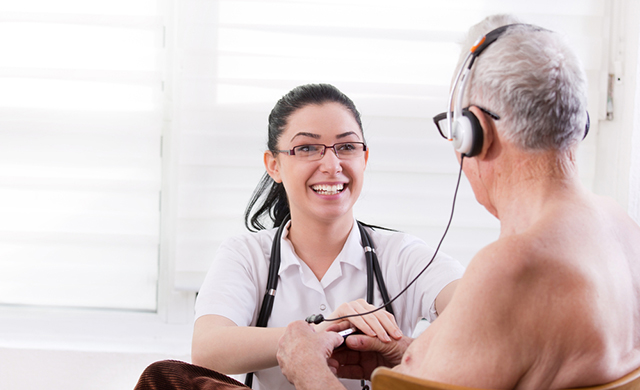 Mary: I got my mom back for a bit. I got to enjoy the music with her…She was there, she was here and I could see her again happy, joyful, and singing. Which is what she did all the time doing the dishes, doing the laundry, vacuuming, and whatever she was singing and she loved it and there she was my mom was back. Little snippets of seeing her it was awesome and it did a lot for me because I got to have her for a few minutes again, it really did a lot.

June: As I look back, [music therapy] kind of became paramount in the whole thing. Like, I think of that more than most of the other things because it was such a part of her and such a part of me really too. And it was such a pleasant part that even with all the difficulty at the end and everything I could still hear the music, I could still see her face even without looking at the video. This was all imprinted in my mind. And it’s like, kind of like a happy ending…it’s such a pleasant memory.

There can certainly be great excitement in research that uncovers the “new”: Something unexpected is alluring, even sexy, and can dominate our internal news ticker. But my favorite research is the kind that offers evidence for the obvious. I’m not referring to confirmation bias, the active hunting for information that backs up your predispositions; rather, I’m speaking to that point of contact between evidence-based practice and practice-based evidence, where systematic examination of a phenomenon and clinical experience with a phenomenon interact to provide a comprehensive, holistic illustration.

I happened across that intersection with my doctoral dissertation, which explored the role of music therapy during pre-bereavement for informal caregivers (i.e., family, friends, etc.). This topic interested me after years of practice as a board-certified music therapist in hospices. The hospice referrals I received always drew attention to the clinical needs of patients—such as assisting with pain managementor facilitating communication around saying "goodbye" to loved ones—but it soon became apparent that, despite patients being the initial focus, it was caregivers who required the greatest support.

I’ve generally found that people approaching death are aware of the full extent of their declining health. What’s more, barring the recurrence of significant trauma or a personality pathology that made living (and dying) in chaos the norm, the dying individual often readily engages end-of-life work focused on resolution and closure. Caregivers, however, while predisposed to resilience in bereavement, can struggle to be healthy, present, and engaged during pre-bereavement. These struggles can hinder their ability to partner with their loved one in facilitating a good death, one defined by resolution as much as sadness.

Complicating the work is that, in contrast to our desire to work with whole beings, we are only able to work with caregivers as caregivers. This means that whatever mental health, developmental issues, atypical functioning or physical disabilities caregivers may be living with, our job as hospice professionals is to compartmentalize those health concerns and only address them as they impact their ability to provide care. For instance, if we are aware that a caregiver is in recovery, we do not directly address the addiction unless it is directly impacting the care recipients’ care. And even then, we tread a line where we do not incorporate the recovery work into the therapeutic process, but rather work to expand awareness about how the addiction is impacting the caregiving setting.

Entering into the study design, I found myself entertaining several lines of inquiry: What are the needs of caregivers during pre-bereavement? Which of those needs can music therapy help address, and by what processes? And heck, how do we even define pre-bereavement?

Germane to the last question, one of my first tasks was parsing out the language across pre-bereavement, pre-loss, and anticipatory grief: which was most appropriate and why? I ended up ruling out pre-loss and anticipatory grief because of the shady ethical implications with each. Losses are continuous and flow into one another, and with loss always comes grieving to some degree; subsequently, there is no “pre-loss” or “anticipatory grief” prior to the care recipients’ death because each are evolving, ongoing constructs over the course of the care recipients’ disease trajectory. In contrast, pre-bereavement was a clearly demarcated time period between the hospice diagnosis and the care recipients’ death, which provided a concrete, objective dimensions for inclusion criteria.

Ultimately, I interviewed 14 presently bereaved caregivers about their pre-bereavement experiences in joint music therapy sessions with the care recipient. Of those 14, 13 had been caregivers of people with dementia; the 14th had provided care for her daughter who had life-long cognitive limitations not unlike dementia. I employed a constructivist-grounded theory methodology utilizing situational analysis, which helped me deconstruct and reconstruct the data in a Hermeneutic analysis that revealed subtle, embedded narratives in the transcripts.

So what did I find? A theoretical model of resource-oriented music therapy with informal hospice caregivers during pre-bereavement. Great, you might be saying to yourself: What is that?

The long and short of it is that, as care recipients’ health declined, caregivers were at increased risk of moving further away from their pre-illness identity in the context of their relationship with the care recipient. That means caregivers interacted less and less as a spouse, parent, or child with the care recipient—acts of love (i.e., eating dinner with my wife) transformed into mechanical acts of service (i.e., feeding dinner to my wife) that became less about fulfilling the need to relate meaningfully to a loved one and more about meeting the “next” need.

Without connection to the stable care relationship that caregivers had maintained with care recipients prior to their illness–that is, within spousal or parent/child dyads–meaning slowly siphoned away from the caregiving setting. Responsibilities increased, along with a developing bevy of challenges, and caregivers were increasingly drawn away from shared activities, such as going to church or seeing family, and pulled towards more immediate needs, such as providing a bath or preventing wandering behaviors. At the same time, caregivers were coping with the personality shifts and overall loss of vitality demonstrated by care recipients over the long course of their disease trajectory.

So the resource here was the stable caring relationship caregivers had with care recipients. Obviously this cannot be assumed within all caregiver/care recipient relationships, but in this sample, it was indicated that when this resource is present, music therapy can help amplify it, thus providing caregivers access to increased resiliency.

And what of the music therapy itself? The articulated music process was called collaborative musicking, in which music therapist, caregiver, and care recipient assumed roles as stakeholders in the co-constructed music process. Each stakeholder shared and negotiated responsibilities in the musicking, across the selection and recreation of the music; receptive engagement with the music; and verbal processing of the experience. Due to this stakeholdership, collaborative musicking was understood as a situated process, meaning that its shape and function were responsive to the contexts informing the therapeutic space. These contexts ranged from the macro (e.g., language, religion, and ethnicity) to the micro (e.g., care recipients’ pain level and caregivers emotional health). In my next post, I'll discuss collaborative musicking in greater detail, focusing on its development into a protocol that can inform and shape clinical decision-making with pre-bereaved caregivers.

For those interested in a more thorough discussion and conclusion, the full report of this study can be found in the most recent issue of Journal of Music Therapy. To close, I’ll note that this study intended to be of clinical significance—not just statistical significance—to music therapists. Too often research offers a finding that, while impressive on face, lacks substantive impact because the report does not help inform clinicians' work. These empty studies do a disservice to patients as they do not help clinicians provide evidence-based or practice-based services. To that end, the next step in developing this study's clinical significance is developing a protocol to be tested in a controlled research context. In other words, will objective clinical measurements align with the subjective interpretations developed in this grounded theory methodology? The ultimate goal will be to provide hospice music therapists a resource that can inform assessment, evaluation, treatment planning, and treatment summaries when working with informal hospice caregivers during pre-bereavement. One step at a time.

How to Set and Reach New Year's Goals