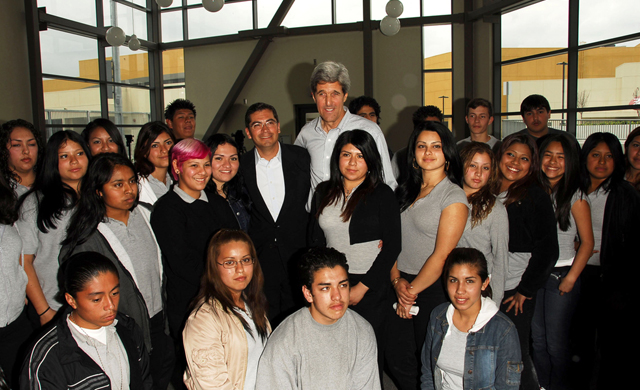 By Alan Yuhas, The Guardian

Congressman Xavier Becerra was appointed as California’s attorney general on Thursday, setting him up to lead the state’s looming court battles with Donald Trump over climate change, immigration and more.

A 24-year veteran of Congress, Becerra will replace outgoing attorney general Kamala Harris, who won a Senate seat last month. Becerra, 58, earned a law degree from Stanford University and worked in the civil division of the attorney general’s office before winning election to the House of Representatives.

Once there, he rose to become the highest ranking Latino member and was a strenuous advocate for Barack Obama and Hillary Clinton. His appointment makes him the state’s first Latino attorney general.

California’s state leaders, including Governor Jerry Brown, have promised to resist attempts by a Trump administration to alter state policies on climate change, organized labor and immigration. Eddie Kurtz, executive director of the Courage Campaign, a progressive organizing group, hailed Becerra’s appointment, saying, “California can – and should – be the tip of the spear for state-based resistance to Trump and the Republican party’s inhumane vision for our country.”

Brown and Becerra said they would protect California’s values. “Xavier has been an outstanding public servant – in the state legislature, the US Congress and as a deputy attorney general,” Brown said in a statement. “I’m confident he will be a champion for all Californians and help our state aggressively combat climate change.”

“Governor Brown has presented me with an opportunity I cannot refuse,” Becerra said on Thursday. “As a former deputy attorney general, I relished the chance to be our state’s chief law enforcement officer to protect consumers, advance criminal justice reform, and, of course, keep our families safe.”

“California right now is ahead of the country when it comes to clean energy, commonsense treatment of immigrants, real health security and so much more,” he added.

Trump has not yet named anyone to lead the Environmental Protection Agency (EPA), but has placed a coal lobbyist in charge of his EPA transition team and has called global warming a hoax “created by and for the Chinese”. More recently, Trump told the New York Times he believes there is “some connectivity” between human activity and climate change, and said he has not yet made up his mind whether the US should withdraw from the Paris climate agreement.

The president-elect has also promised to deport millions of migrants and cut federal funding to “sanctuary cities”, where local authorities limit their assistance to federal deportation. His other proposals that may violate the constitution include penalties for free speech, a religious test for migration, retaining his businesses and interfering with the justice system.

Mayors of two major California cities, Los Angeles and San Francisco, are among those that have promised to try to protect migrants from Trump’s encroachment into local policies.

With Becerra as attorney general, liberal California could play a similar role under a Trump administration as the one performed by conservative Texas during the last eight years of Obama’s administration.

Texas aggressively lead 46 lawsuits against the administration, questioning the president’s power on immigration, climate change, healthcare and voter rights, among other issues. The state has won seven cases so far, most prominently a 4-4 supreme court decision that ultimately blocked Obama’s efforts to protect millions of migrants from deportation.

The state has lost 12 cases, including a 2012 decision that upheld Obama’s signature healthcare act as constitutional. In all, the suits lifted Texas’ attorney general’s office to the head of the opposition against Obama – raising Ted Cruz to a Senate seat and presidential campaign – and cost Texas taxpayers almost $6m.

Anthony Rendon, California’s state assembly speaker, hinted at the future court battles awaiting the Democratic party. “Becerra clearly has the experience to step into this vital role,” Rendon said in a statement. “Just as important, he has great tenacity and he respects the rights of all Californians – much-needed qualities for an attorney general given the troubling times ahead.”