Across the country, counselors advise Latinos on health insurance as markets open 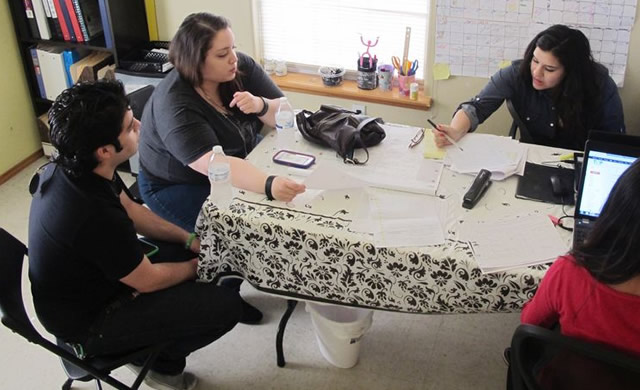 The calls and questions started last week and had kept the clinic busy all morning Monday. If the traffic keeps up or gets any heavier, more counselors will be needed, said Lourdes Rangel, Laredo, Texas-based Gateway’s director of patient access and education.

“Right now we are using the registration department for clinic services to help out. We are using all of our resources with the center,” Rangel said.

Texas, the state with the second-largest Latino population in the country at 9.8 million, is one of 26 states that chose not to create a state-run marketplace. Doing so left the federal government to pay for outreach to the state’s Latinos eligible to sign up for health insurance under the new law. The state required counselors to undergo extra training to be certified to do outreach.

Florida, whose Latino population of about 4.4 million ranks third, also opted to let the federal government run its health insurance shopping network. There, Florida Gov. Rick Scott has prohibited county health offices from coordinating or cooperating with the counselors known as Navigators that are supposed to help people navigate the marketplaces.

Latinos are key to the success of the new health care law. Many Hispanics lack insurance but are eligible to buy coverage on health insurance marketplaces. For these exchanges to work, young, healthy people need to enroll – and Latinos are relatively younger than other Americans. But states that chose not to run their own marketplaces also have less money for community groups to pay the cost of getting the word out to Latinos about the new law and to help them choose health insurance.

“States with federal exchanges are in good hands, but they have less resources because all of their funds come from the same pot of $67 million”, said Jennifer Ng’andu, a health policy expert at the National Council of La Raza.

While Tuesday is the grand opening -regardless of the shutdown -of the health insurance shopping site healthcare.gov, much of what will happen for now will be just looking and comparison shopping. The markets will be open for about six months, giving people plenty of time to make their choices before the closing day of March 31, 2014.

About 30 percent of Hispanics lacked health insurance in 2011, according to the U.S. Census. Not all of those uninsured will qualify to get insurance on the marketplace. Some instead will qualify for Medicaid, a program for the very poor, and others’ immigration status will keep them from qualifying. Children of immigrants not legally in the U.S. but whose deportation has been temporarily waived, also known as DREAMers, are not eligible. Immigrants legally in the U.S. are.

Several states also chose not to expand Medicaid rolls as allowed under the law, so those in states like Texas who learn they are eligible for the program because of their low incomes may have to contend with limited budgets that don’t allow for adding people to the program.

In all, about 10.2 million Latinos are eligible to shop at insurance marketplaces, according to the Department of Health and Human Services.

Rangel said the need is great in three South Texas counties that Gateway’s clinics serve, Webb, Jim Hogg and Zapata. The clinics have more than 26,000 patients registered with them and more than 60 percent lack health insurance, Rangel said.

“There’s a lot of working people that are in the middle that fall through the cracks,” she said.

In Los Angeles, Patricia Veliz Macal said she is finding a hunger for information about the new law in the Latino communities where she has worked as a “promotora,” a lay health worker, since 1991. California’s Latino population is the largest in the U.S. totaling about 14.4 million in 2011. The state is running its own insurance marketplace and has a heavy outreach program in place.

“They have many questions over what the penalties are and when it will begin and who is going to respond to their questions,” said Veliz Macal, who as a promotora with Planned Parenthood has instructed people in the community on sexual and reproductive health, AIDS and other issues.

She said most of the people she speaks to have no information and little education and the face-to-face encounters work best, but many are eager to do what they need to do to comply with the law.

A similar hunger can be found in the Latino and the French-speaking African population in Prince George’s and Montgomery counties of Maryland, said George Escobar, director of Health and Human Services at Casa de Maryland. Maryland’s Latino population numbered about 489,000 in 2011, according to a study by Pew Hispanic Center.

The state is running its own marketplace and provided $7.8 million for outreach to all uninsured in his region and a total of $55 million for the state. That compares to about $1.5 million for nearby Virginia, where Latinos number about 649,000 and the state left operation of its insurance markets to the federal government, Escobar said.

“There’s a lot of confusion because of the negative press, especially right now with the government shutdown,” Escobar said. “It’s a lot of background noise through which we are trying to convey this message.”