Do You Speak Health Insurance? It's Not Easy 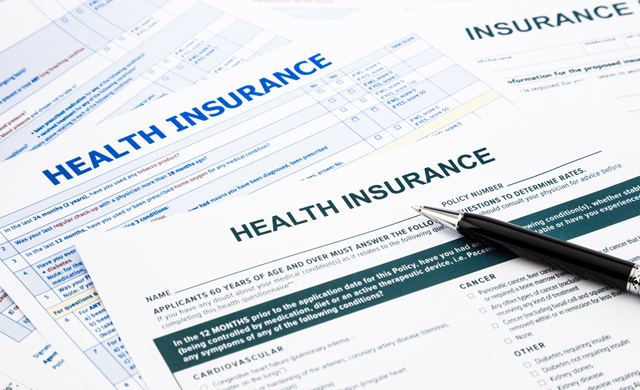 Solicit opinions about health insurance and you're almost guaranteed to find consensus: It's mystifying and irritating.

"It just seems like a lot of the buzzwords are intended to just complicate the whole thing and make it more expensive," says David Turgeon, 46, who's sitting in a Minneapolis mall eating lunch.

Enrollment season rolls on, and people shopping on HealthCare.gov and the other marketplaces had until Jan. 31 to decide on a plan.

But even people trying to pick from their employers' options can find the process complicated and difficult to understand. The jargon can be overwhelming, and it can lead people to make costly mistakes or to avoid care altogether.

Ronen Ben-Simon, 28, also eating lunch in Minneapolis, says some basic health insurance terms are lost on him — even though he's a nurse. "I don't even know what coinsurance is, to be honest," he says.

Coinsurance, if your plan has it, kicks in after you've met your deductible and requires you to pay a set percentage of medical bills.

Over in St. Paul, Minn., Seanne Thomas, a 50-year-old real estate broker, says she has gotten good at figuring out how health insurance policies work. She's had to, because her family members are covered under three different plans. "So I had to compare copays, I had to compare out-of-pocket, you know, deductible and maximum coverage."

With all that grappling with insurance plans she's done, Thomas is game for a quiz. Here's a scenario, one of several, developed by American Institutes for Research:

Thomas nails the copay and deductible, but then runs aground.

"I don't know what you mean by the term coinsurance," she says. And without knowing that term, she's out of luck.

Most people would be in the same position. A couple of years ago, American Institutes for Research, which is a social science research firm, asked hundreds of people and found that only 1 in 5 got the right answer, which is $210.

"People really struggle with understanding health insurance for a variety of reasons," says Kathryn Paez, who researches health insurance literacy for the organization. "One is just the volume of information. There's a lot to know. The other is because the language is unfamiliar to them, and they don't really understand health insurance terms and concepts."

And that unfamiliarity, Paez says, is greater among African-Americans, Hispanics and people with low incomes and low levels of education. Highly educated people struggle, too.

"We've created a monster, and it's not surprising to me that there's literacy issues," says Kathleen Call, a professor in the University of Minnesota School of Public Health. "I've studied this stuff, and sometimes I make mistakes."

Call has grown increasingly concerned that the complexity of insurance could compromise public health by keeping people away from the doctor.

"People are treating it more like car insurance: You don't use it until something happens," she says. "You have an accident, then you use it. Otherwise you're trying not to use it. And that's not the way we want health insurance to be used."

And, Call says, not understanding what's covered and what's not can leave people on the hook for big medical bills. "That mistake can mean the difference between paying that medical bill or paying rent," she says.

Surveys confirm that growing numbers of Americans avoid care because of the cost.

Remember that quiz? We ran it by the industry group that represents health insurance companies, American's Health Insurance Plans.

Clare Krusing, a spokesperson for AHIP, accepts the challenge and then wishes she had a calculator in front of her.

"I totally understand why this is confusing and can be challenging," she says. But the low $100 deductible was the biggest stumbling block for her. "I just don't know of anyone that would have a $100 deductible to be totally honest with you."

So who's to blame for all the confusion? Krusing says the industry is using increasingly complicated cost-sharing schemes to hold down the cost of monthly premiums.

The industry and consumer advocates agree, if something's unclear, demand clarification from the insurance company.