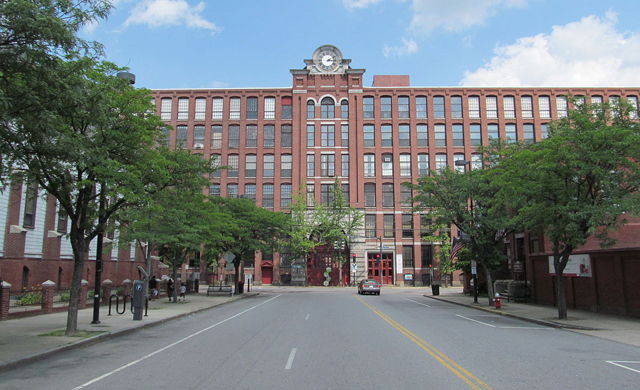 Getting a company started in the U.S. takes hard work, especially if there are language and cultural barriers. But a group of Latinos who have grown up in or near a Massachusetts city known for its immigrant roots are working to train and empower a new generation of Hispanic entrepreneurs.

Emprendimiento para Todos, or EparaTodos, is a small-business incubator based in the city of Lawrence and neighboring towns. It provides assistance to Latino immigrants who want to open their own business.

The Spanish-language accelerator program is part of a larger organization, Entrepreneurship for All, which works to promote business growth that also has a social impact.

The city of Lawrence, known as the "City of Immigrants," has always been known for its industrial roots; several factories including New Balance currently operate there. Nearly 73 percent of the industrial city's population is Latino, and Dominican Americans make up almost 29 percent of the population —the highest concentration in the U.S.

In Lawrence, 60 to 70 percent of the small businesses are owned by Hispanics. But like other industrial cities across the U.S., it grapples with higher unemployment (8 percent) than other regions.

Latinos who grew up around Lawrence saw an opportunity to help the region's immigrants build the local economy.

"Maybe they were in their own country and they had their own business, but they came here and didn't know where to start," said Janin Durán, EparaTodos' founder and executive director. "We show them a way to get excited and take the risk to start a new business here."

Durán, who is of Dominican heritage and was raised in Lawrence, says the program teaches more recent immigrants how to enter the "Anglo market" without limiting the way they provide services to their local communities. Three quarters of EparaTodos members are female and about 75 percent are immigrants.

EparaTodos graduate Daniela Valdivia, a 39-year-old businesswoman born and raised in Lima, Peru, immigrated to Lawrence, Massachusetts less than a year and a half ago. She began her career in Perú in 1999 in the tourism industry, but after marrying a Bostonian she moved to the U.S. and left her travel agency in her sister's hands. She joined EparaTodos to figure out new ways to build a small business within the travel sector.

Using her previous work experience, Valdivia decided to create Spanish-language tours of Salem, Massachusetts. Now she is the CEO of Vibra Tours.

"When you go to Salem, you can only find English-language tours," Valdivia said. "What I am doing is promoting Spanish-speaking tours and partnering with local restaurants for day trips. I am also planning to open tours of the White Mountains, downtown Boston and even weekend tours of New York City."

Yohanny Cespedes moved to the U.S. from the Dominican Republic when she was 19 years old to go to college in Boston. To make extra money, she worked cleaning houses. After she graduated from Springfield College-School of Human Services, she continued to organize her budding cleaning service, but did not have the network or the capital to expand her company. After participating in the EparaTodos program, her company CCK2-Cleaning Services now employs 19 people.

"I went to college so I could learn how to help people," Cespedes said. "People need to know that when they come to the U.S., they do not have any limits if you keep asking questions. You can succeed here and help the Latino community if you help one another."

The marketing manager for EforAll and EparaTodos is Andrés Vargas. He's only 23, but he made history as the first Latino councilman in his neighboring city of Haverhill; he's the youngest one in the state.

Vargas decided to forego moving to a larger city after graduating from Boston University and instead ran for office in his hometown. He said he wanted to reduce the "brain drain" and help the local economy grow.

"I remember the first problem I tried to solve: snow blocking sidewalks and driveways of elders in my neighborhood in Haverhill," Vargas said. "My cousin and I saw an opportunity to not only make life better for folks, but also to earn some cash along the way. This is the essence of entrepreneurship."

Vargas' father is one of the many entrepreneurial people who immigrated to Massachusetts for better work and life. After working in a shoe factory in Haverhill, he founded a non-profit,the Dominican Organization of International Resources to help give people in the Dominican Republic access to medical supplies and better education.

Vargas wants people in his community to succeed like his father did.

"EparaTodos unlocks that potential in Latinos and helps them navigate financial institutions and breaks down language barriers," Vargas said. He explained that Latino immigrant entrepreneurs who want to compete in local or larger markets need to be able to do business in English.

Durán and Vargas both came from immigrant families; to them, it makes sense to help the next generation of immigrant entrepreneurs who are changing the face of New England.