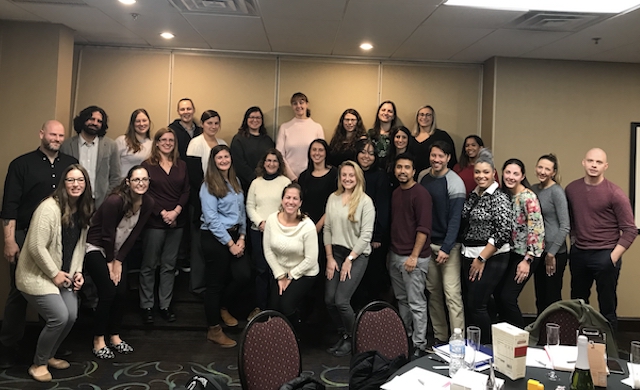 From a dancer and circus performer in Peru, to a field director for Banfield Pet Hospital throughout the state of New York – Xuxa Rubio shows how far you can go when you decide to invest in yourself and listen to others.

If you’ve ever seen Double Dutch jump rope, you know the rhythm and teamwork it requires (and if you haven’t seen it, google it). It takes a special skill to achieve the level of teammate synchronicity needed to avoid getting caught up in those fast-moving ropes.

Turns out, that’s a skill that also comes in handy when you’re in a new situation, learning as you go, ready to jump in and get to work.

That describes Xuxa Rubio well, as she has successfully navigated many new situations throughout her life, adapting to and seizing the moment by pushing herself and listening to those around her.

As field director for Banfield Pet Hospital, Rubio helps support 15 hospitals throughout the state of New York. She works closely with leaders at each hospital to make sure they have the resources and tools every day to run their hospitals successfully and provide high-quality pet care.

“I love to learn, I’m very curious and self-motivated,” said Rubio. “I invest a lot in my own development. When you do that, you can go places.”

And she’s gone places: from Peru, to Florida, to New York. From a star Double Dutch performer in the circus, to a practice manager of a veterinary clinic, to a leader of 15 pet hospitals.

“I’m very curious, always wanting to learn more,” said Rubio. “I’m action oriented – when I see problems I start fixing them. When I want something, I go after it. I ask a lot of questions. At Banfield I found something I could really stand behind.”

She started her career as a client service coordinator in a Florida hospital. Rubio studied marketing in college and previously worked in retail and sales – so she always thrived working directly with clients. She enjoyed her time helping run the reception area, but it wasn’t long before she worked her way up to become practice manager. Then the hospital owner decided to become acquired by Banfield, and the work of converting the hospital began.

“Converting the hospital and making those changes was an exciting challenge,” she said. “I felt the need to jump in just do the work and fix it and keep moving. In a growth company, you need that attitude.”

As usual, she asked a lot of questions along the way. She was confident she could play a pivotal role in helping the team make the necessary adjustments, but she also knew she couldn’t do it alone. She worked closely with the people at Banfield’s Central Team Support.

“We had been operating with our own medical supplier, our own facility team, our own warehouse,” said Rubio. “I had to learn how to update the system and procedures we had in place. It was a big switch for us, but an exciting one – and I was up for the task.”

She eventually moved to New York City six years ago and was practice manager for the Banfield’s East Harlem location for two years before being promoted to field director supporting 15 hospitals throughout the state.

A Performer at Heart

Working in pet care was not even close to what she thought she would be doing for a living when she was young.

Born in Lima, Peru, Rubio spent her childhood as a performer. She was part of an entertainment company that performed on television and at parties. She also put her dancing skills to use in the circus, where she specialized in the Double Dutch jump rope – under the tutelage of a personal trainer from Russia.

That’s where she saw herself going, until her parents decided to move to South Florida when she was 15. Once in the United States, she had to learn English, so it took her a few years to get back into entertainment. But without the connections she had in Peru, it was harder to make a career as a performer. Today, her most faithful audience members are her two daughters, ages 12 and 1.

“I love to perform,” she said. “Give me a microphone and put me on stage, and I will dance and get everyone excited.”

While she was still a practice manager in Florida, Rubio had a conversation with a veterinary technician who reported to her about their goals for the week. Rubio was trying to figure out how to help the team deliver on these goals more efficiently.

She hadn’t yet learned that in order to improve the process, she really needed to dig in and experience it so she could learn directly from those on the front lines.

“I’ll never forget when one technician said to me: ‘You’re a great leader, we know you care, but the only way you’ll be able to help us is if you learn how to do this with us.’ I’ll never forget that. As a leader, you really need to put yourself out there so your team can give you feedback to make you better. I appreciate her so much for doing that.”

Just the other day, someone who’s a new leader asked Rubio for advice: “I told her: listen, listen, listen. I’ve had to work on that myself, because I love to talk. But if you don’t listen, you will eventually end up surrounding yourself with people who don’t have anything to say.”