Why Some Students Are Ditching America for Medical School in Cuba 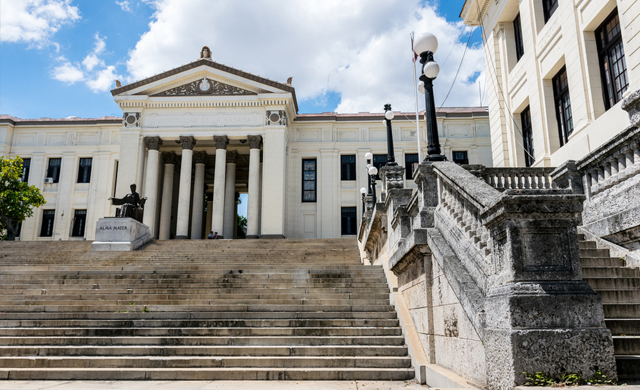 hen Sarpoma Sefa-Boakye, who grew up in southern California and went to UCLA, heard she could go to medical school in Cuba, she thought it must be a joke. Not that it existed—she met Cuban doctors while studying abroad in Ghana, so she knew about the country’s robust healthcare system. What was unbelievable was the cost.

“I called the office asking how much the program cost, how much the application fee was. They were just like ‘Free, free,’” says Sefa-Boakye. “How can it be free?” But indeed, the Latin American Medical School—ELAM, in Spanish—is free, charging no tuition, room, or board. In 2002, she packed her bags for Havana.

Sefa-Boakye is one of over 100 Americans who have gone to the school. Cuba established it in 1999, after the country sent hundreds of doctors to help neighboring countries hit by hurricanes. The school is an extension of that medical diplomacy: ELAM caters specifically to low-income students from outside Cuba, who come learn for six years and return to serve their communities.

Does this sound like a way to spread Cuba’s ideology—you know, propaganda? Sure, maybe. But for some American students, the school’s draw is free tuition. Others comes specifically because of Cuba’s ideas about healthcare, including its emphasis on community medicine. At a time of ballooning health costs, the US might learn a thing or two about that.

Consider Cuba’s medical system, which punches far above its weight.  The country’s GDP per is just one-tenth of the US’s,1 and it lacks access to drugs and equipment thanks to the US trade embargo. But life expectancy in Cuba is actually just above that of its northern neighbor. How? By focusing on preventive medicine for everyone under a national healthcare system.

That means the doctor-patient relationship in Cuba is very different. “The primary care physician lives where they work. Their home is typically above the clinic,” says Brea Bondi-Boyd, a 2009 ELAM graduate who is now a family care physician at Contra Costa Regional Medical Center in California. She recalls doctors making house calls, doing public health surveys in their neighborhoods, and even looking for stagnant pools of water during dengue season. In short, doctors in Cuba take on the unglamorous work of public health.

Not that Cuba is a medical utopia. The embargo means that shortages exist for drugs as common as aspirin. Expensive tests like CT scans were rarely ordered—assuming the hospital even had reliable electricity, says Bondi-Boyd.

The Latin American Medical School, with its chalkboards and school desks, also looks nothing like a modern medical school. The campus is on an old naval base, and accommodations are spare, with up to thirty students per room crammed into former barracks. Meals are in the mess hall. “The hardest thing for me was to take cold showers,” says Sefa-Boakye.

The isolation from family and friends back home is also tough. Wifi is now free on sidewalks in Havana, but in the early 2000s, the only Internet was dial-up at hotels. A phone card to call the US might cost $2 a minute. Mail from the US couldn’t get through because of the embargo. American students do get one concession from the US government; they have special licenses that allow them to hop on a direct flight from Miami.

For American students unfazed by all that, Cuba offers a very different kind of medical school experience. For one, the student body is extremely diverse, with students from all over the world. They get a crash course in Spanish to prepare them for the all-Spanish curriculum.

“ELAM was this UN,” says Sefa-Boakye, whose parents are originally from Ghana. She grew up going to predominantly white schools, and seeing Afro-Cuban women leading school departments was a revelation. In the US, African-Americans and Hispanics or Latinos make up only 15 percent of students who enter medical school and only 7 percent of medical school faculty.

Bondi-Boyd, who grew up with working-class parents in Alaska, sought out the medical school because it attracted other students from low-income and rural families. “I didn’t get a sense that I belonged at the medical institutions in US because I’m from a poor family,” she says. The numbers bear it out: In 2006, the median parental income of students entering US medical schools was $100,000, twice the national average.

In Cuba, “the class structure between doctor and patient, the gap in wages, isn’t as wide,” says Sefa-Boakye. Doctors are paid a working-class salary, and Cuba has the highest number of doctors per capita in the world, 67 for every 10,000 people. Being a doctor is not the elite, lucrative profession that it is in the US.

The US, meanwhile, faces a shortage of doctors.

The Association of American Medical Colleges projects that the country will have 130,600 fewer physicians than it needs by 20252. More than half that shortage will be in primary care. That’s because American medical students—who graduate with an average of $180,000 in debt—are flocking to subspecialities, where pay is higher and hours more flexible. One study found that the percent of American students who gravitated away from internal medicine because they were not interested in primary care doubled to 41 percent between 1990 and 2007.

“It boggles my mind they make it so expensive and so hard to be a doctor,” says Darnna Banks, who recently graduated from ELAM and matched to a pediatrics residency program in Chicago. Banks, who won a full ride to college, chose the school because she couldn’t fathom how to pay for her medical education. Most of the school’s American graduates go into family medicine, internal medicine, or pediatrics—all fields facing major doctor shortages and all fields on the low end of the doctor pay scale.

Sefa-Boakye is now a resident in family medicine in southern California, where the Spanish she perfected in Cuba comes in very handy. Before practicing in the US, she remembers feeling daunted by the electronic health records and lab tests that she read about but never used in Cuba. But the worst part actually, she says? All the insurance paperwork.

It’s hard to imagine, even with Bernie Sanders running for president, ripping out the entire health insurance infrastructure in the US to grant healthcare for all. But during a time of state dinners and Rolling Stone concerts in Havana, Americans could learn a little more about their neighbors. And they might like at least some of what they see.