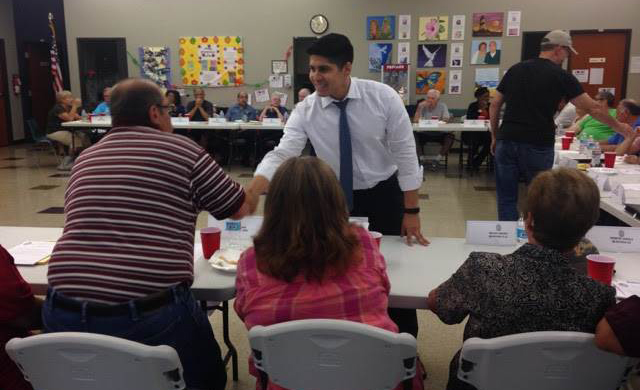 Higher education changed the life of San Antonio, Texas, councilman Rey Saldaña, 28. Now the legislator is helping the next generation, working with the same organization that helped make college a reality for him.

Saldaña was a bright high school freshman, but he assumed that the diploma he would get three years later would be the end of his education.

"Coming from a low-income community with parents who didn't graduate high school and didn't speak English, my path at that point was just to graduate high school," Saldaña said in an interview with NBC Latino. His father, who immigrated from Mexico, worked in manual labor, and the same applied to most of the adults around him.

Saldaña credits the work of social workers like Gladys Reyes with pushing him to look past high school. Reyes is part of Communities in Schools, (CIS) an organization that places social workers and counselors in schools to ensure that children and teens get the resources they need to graduate. Since the 1970s, CIS counselors have helped students navigate and apply for scholarships and financial aid and have offered resources and advice for getting through high school.

Saldaña participated in CIS's "Upward Bound" program while he was at South San Antonio High School. The program helps with all aspects of pre-college preparation and even allows students to visit and stay in college campuses. Through hard work and dedication Saldaña obtained a scholarship to attend Stanford University, one of the most prestigious and rigorous universities in the country. He graduated with a Master's degree at 23.

Fast forward a few years, and Saldaña is a city official in the place where he grew up. But he also chairs the CIS Alumni Leadership Network in San Antonio, a professional and personal leadership development group for CIS alumni all across the country as they graduate from high school and navigate college and career.

"I could not call home and ask my mom and dad how to deal with my first year of college," Saldaña said, explaining that for many first-generation Americans, earning a high school diploma is just the first of many barriers they will face in pursuing their education.

"These investments the Alumni Leadership Network make are in the soft skills not taught in immigrant, first-gen or low income households. We help with the basics on building a network and climbing the ladder."

Students will deal with many issues before and during college, whether they are applying for financial aid or even roommate issues. Those involved with the CIS Alumni Leadership Network offer a point of contact for help and advice, smoothing out the transition to college so that students can focus on their education.

"The Alumni Leadership Network recognizes the investment we put in high school students is important, but it isn't enough to give an abrazo and say 'good luck' on graduation day," Saldaña said. The margin of error for a student stepping foot on a college campus for the first time is so thin, said Saldaña, that even missing a deadline for a financial aid form can result in a student returning home without graduating.

Saldaña, who attended Stanford University as a Gates Millennium Scholar, said the network in San Antonio is comprised of professionals who were first-generation college students, came from single-parent households or got an education after being incarcerated.

The network's mission does not end when their mentees get a university degree. Saldaña is working on attracting many of these talented college grads back to San Antonio to build businesses and careers. Saldaña said when the Lackland Air Force Base closed down, the San Antonio middle class shrank dramatically.

"You have plenty of students heading to Los Angeles, Chicago or New York after graduation," Saldaña said. "All the talent flocks to the same epicenters. Think about how much communities are losing because of this."

While campaigning for city council, Saldaña said that mothers and grandmothers throughout his district told him he needed to slow the brain-drain from the city and draw their children back. For many young people from San Antonio, Saldaña said, a measure of success was moving as far away as possible.

"Conversation after conversation, people said we are a community people look to escape," Saldaña said. "CIS just happens to have this captive audience of people coming from distressed parts of San Antonio, filled with this fire in their bellies, looking to make an impact and do something to create a ladder for those behind them."