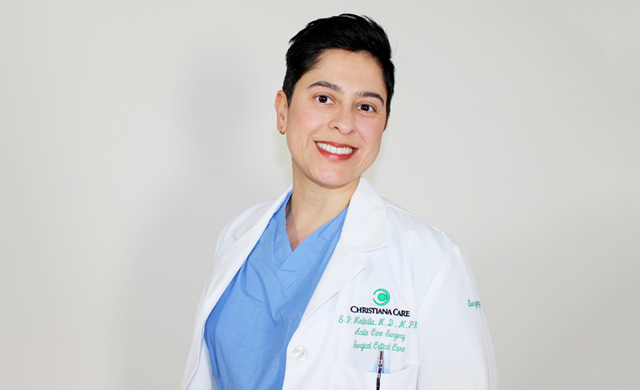 The path to the emergency room was not a direct one for Dr. Sandra Medinilla.

“I wanted to do family medicine at the beginning, but initially I didn’t like the pre-med aspect of things so I became a sociology major at Bryn Mawr [College],” she said. “But that experience was eye-opening to me. That is when I began to understand. Even though I was born here, the immigrant story became so much relevant to me when I understood what my parents went through.”

Medinilla is the medical director of violence prevention at the Christiana Care Health System in Delaware. She also works as a trauma surgeon at Christiana Care’s flagship hospital in Newark, Del. Outside of her surgical work, her position as medical director puts her in a position to educate the community as a whole. As such, she has worked with the medical community to deal with community health issues in Delaware such as the rise in gun violence in Wilmington.

“I’m hopeful,” she said. “Since the reports started coming out, everyone has started to talk about it more. And now we’re all trying to help and work within our own little microcosm. The endgame I think, is a culture of peace and love.”

Born in Philadelphia to Guatemalan parents, Medinilla was raised in Wilmington. After Bryn Mawr, she would attend Hahnemann University (now Drexel University) where she got her master’s in public health. Her studies would take her to work with El Comité de Apoyo a Los Trabajadores Agrícolas (CATA), an organization that supports the migrant farmworkers in the region.

“We were using a popular education methodology to teach farmworks about working with pesticides, health issues and things like that,” she said. “It became apparent to me that my community was lacking comprehensive health care that understood their particular health issues and needs as well as their story and migrant issues. ”

“It became apparent to me that my community was lacking comprehensive health care that understood their particular health issues and needs as well as their story and migrant issues. ”

She would eventually go back to school this time with a focus on completing a medical education which she did at Temple University. She would get into trauma surgery at Temple eventually becoming a Surgical Critical Care fellow at the University of Maryland Medical Center in Baltimore.

Medinilla said identifying with patients and with the community is always her goal. Through her work in trauma and now violence prevention she feels she can reach across many different barriers.

“Being a woman, a Latina and a lesbian, identity is very important to me,” said Medinilla. “Especially in my career. In the end I want to reach my patients in any way I can.”