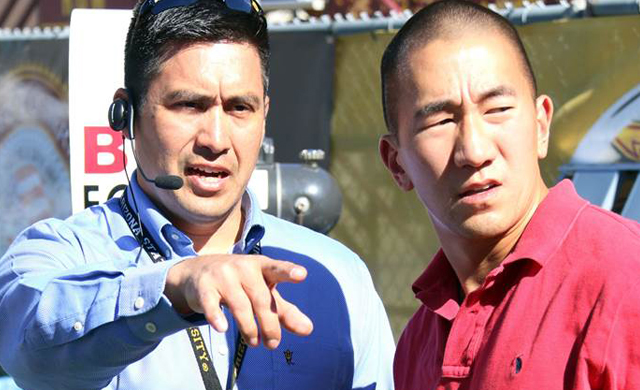 As a neurologist, Dr. Javier Cárdenas has been a major player in addressing concussions in high school and college sports.

It is no wonder that the National Football League is turning to Dr. Javier Cárdenas for advice in the treatment and prevention of concussions. The 40-year-old neurologist and director of the Barrow Neurological Institute's Concussion Center in Phoenix is a leading expert in the field and sits on the NFL's Head, Neck and Spine Committee.

Cárdenas, a former educator turned neurologist, advises the league on best practices for concussion prevention and management, as well as educates players about concussions and other forms of brain injury. Besides his NFL work, the neurologist, who is Mexican American, has been a major player in addressing concussions in high school and college sports.

For years, the NFL has been criticized for its handling of concussions and its efforts to keep secret what it knew about the dangers of concussions, which is part of the focus of the recently-released film, "Concussion."

The league has made changes. One of the latest changes came last year when the NFL implemented a new rule that gives certified athletic trainers the ability to call for a medical timeout if they believe a player suffered a head injury and may require assessment. During the timeout, consultants like Cárdenas evaluate players for possible concussions.

As an independent neurological consultant for the NFL, Cárdenas attends every one of its football games held in Arizona, including last year's Super Bowl XLIX. He evaluates players on the sidelines when head injuries occur. He also consults with Arizona State University and provides sideline concussion coverage for the university's football and soccer games.

Cárdenas said the fact that an athletic trainer can stop a game so a player can be evaluated immediately after a hit "is really unheard of in any sport." The NFL has made efforts to better diagnose and manage concussions, he said. He declined to comment on how the league handled concussions in the past.

He also said the NFL has "a very strong" protocol for managing concussions, which includes baseline testing and post injury testing. "It's among the best," he said.

He helped create a helmet protocol for the Arizona Interscholastic Association, which oversees high school sports in the state.

Cárdenas created the Barrow Concussion Network to provide concussion education and coverage for high school athletes in Arizona. The network runs a program that allows high school athletic trainers in the state to use a Skype-like tool to reach a concussion specialist, like Cárdenas, for a consultation during or after games.

The network also runs a program called the Barrow Brainbook that teaches high school student athletes in Arizona about concussions and requires them to pass a test before they can play. Since the program was launched in 2011, more than 300,000 students across the state have completed it.

Cárdenas came up with the idea for the Barrow Brainbook after the Arizona Interscholastic Association contacted him and asked what could be done to better address concussions in high school sports.

"As a former teacher, I said the answer is in education," Cárdenas said. "So what we did is we created the first concussion education program for high school students."

He noted that at the time, the Centers for Disease Control and Prevention was providing concussion education for coaches, parents and healthcare providers. "But nothing was offered for whom this affects the most—and that is high school students," he said.

Before becoming a neurologist, Cárdenas was a special education teacher. But said he was astounded after learning from parents about their experiences with physicians and changed careers.

"Some of them mentioned that the physicians wouldn't talk to their children, or if they did, it would be in an age-inappropriate manner," he said. "Physicians would also tell the mothers that their kids had autism, because they didn't love them enough. I thought this was atrocious."

Wanting to have a greater impact on children with disabilities and their families, Cárdenas decided to go back to school to become a neurologist specializing in children. He earned his medical degree and graduated with honors from the University of Arizona College of Medicine in Tucson, Ariz., in 2004.

Cárdenas said the qualities his Mexican American parents taught him at a young age are part of the reason why he's had so much success. His parents instilled in him the importance of getting an education, giving back to the community and never forgetting his roots.