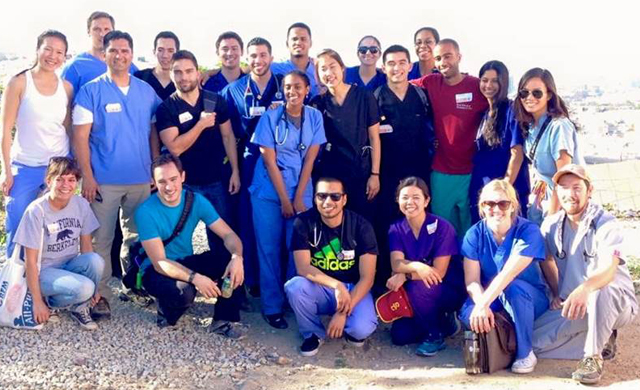 Hispanics and Latinos who mindfully tap one or more of the six elements of an “immigrant mindset” can attract greater opportunities for success. By nature, immigrants see opportunity everywhere; more easily adapt to changing conditions; pursue their passions to uncover endless possibilities; do their jobs as if they owned the business; form strong bonds to treat colleagues and friends as family; and willingly share that success with others to keep the prosperity cycle going. Born Leaders tells their stories

Click on the following link to know more about the "immigrant mindset".

When Andres Alonso Gomez was a boy in Mexico, a kidney disorder sent him to a parade of doctors and specialists for 10 years. When he grew up, some of his experiences could have easily scared him away from doctors forever. Instead, he himself became a physician, in a sense, to put things right.

“I wanted to do something meaningful that would be helpful for myself, my family and my community. I was a frequent patient, so I know how it feels going through all that, and being scared, being uncomfortable.”

Today, he’s finishing a master’s degree in Leadership of Healthcare Organizations at UC San Diego. But he already began taking a leadership role in the community after attending medical school at the Monterrey Institute of Technology and Higher Education in Monterrey, Mexico.

The moment he arrived, he began looking for ways to pursue his passions – and share his success by giving back. Coming from a life in Mexico, Gomez naturally excels at the key elements of an immigrant “mindset” that can help them more successfully achieve their goals.

“I don’t think doctors, who get the best training in the world, should be there just to get the money,” says Gomez, now 28. “I believe that if we have the opportunity to study, to receive the best training in the world, we owe it to others who don’t have those opportunities to give something back, to help others in the same way we have been helped.”

After arriving in the U.S. in 2010, he put that attitude into action. He initially worked as a research fellow at University of California at San Diego. He also began working for Dr. Alexandra K. Schwartz, chief of the Orthopedic Trauma Surgery Department at UC San Diego, who served as a great mentor to Gomez, he says, and “ignited my passion for serving others.” At the same time, he volunteered with Bannister House on campus. The lodge provides a haven for families, often from Mexico or other Spanish-speaking countries, as a retreat from stress of being with a loved one through a serious illness.

The more Gomez experienced, the more he realized “doctors should be more well rounded. They should know more about public health and global health,” he says. “We’re facing a globalized world with many needs that demand skills we don’t learn in medical school.”

Helping the Poorest of the Poor

A very important aspect of that is leadership public health, Gomez notes. To pursue that interest and add a leadership dimension, he enrolled in the master’s program. He also began volunteering with Healing Hearts Across Borders, a non-profit organization that brings doctors and medical students from UCSD and the University of Southern California to Tijuana four times a year to provide healthcare to the poorest residents. Gomez was inspired by his first visit, not only by the people he was treating, but that so many non-Mexicans on the team were willing to reach out.

“I was surprised that I was the only Mexican person there,” he says. “They were my motivation to do more for the Hispanic community,” he says.

During the three-day visits, Gomez serves as an attending physician and as one of three clinic managers. On visits, he and his colleagues lead a team of doctors who may treat 700 residents for everything from anemia and tapeworms to pregnancy care, hypertension, infectious diseases, diabetes, obesity, and a whole range of other maladies.

The setting is challenging. The group sets up a makeshift clinic among the squatters and families that inhabit Tijuana’s Colonia Obrera neighborhood situated next to a sprawling garbage dump. “Homes” cobbled together from Styrofoam and scraps of metal and wood dot the scene. These people are the poorest of the poor, Gomez says.

“Often we see they haven’t received medical attention for years and they may be in the very bad stages of hypertension, or asthma, or diabetes,” Gomez says. It’s a dire situation, because these are “silent killers. You don’t feel anything from hypertension and diabetes until, for example, you get a heart attack or stroke and then you realize it was from high blood pressure,” he says.

Doctors also perform minor surgeries, and refer patients with greater needs for surgery at a participating university hospital in the U.S.

At least 40 to 50 percent of efforts focus on education. Gomez listens to the patient’s story, how they live, what they eat, and makes personal recommendations for healthy lifestyle changes.

Diabetes and obesity, which go hand in hand, are among the most common and significant problems he sees, he says. Gomez and colleagues encourage the residents to exercise more and eat a healthier diet.

“Unfortunately, it cost money to eat healthy,” Gomez says. “They eat tortillas, rice and beans most of the time, and have little access to vegetables or chicken. And they don’t have a refrigerator to store those items, even if they had them.

“We encourage the importance of drinking water, too, but water is more expensive than soda in Tijuana,” Gomez says.

Despite those challenges, Gomez sees that the efforts are making a difference. With diabetic patients, for example, clinical data shows that their blood glucose levels, a measure of how well the disease is being managed, have improved significantly. About 40 percent of the population Gomez serves has diabetes, and tends to show considerable improvement in blood glucose levels after being treated and educated by the team, Gomez says.

But quality of life is the bigger measure for many patients. “It’s more about education. When you talk to a patient the next time, you feel they know more about their condition and to take care of themselves, especially with their eating habits.”

“On a personal level, it’s very rewarding because you’re out in the field giving basic medical care to people who need them the most.” Gomez says, adding that doctors often take for granted that patients understand more than they actually do when managing their health. Educating them is an incredibly important aspect of giving back to the community, he says.

Leading effectively helps ensure success of each Healing Hearts Across Borders effort, and Gomez embraces that leadership role. He plans to make global and community medicine part of his career after completing his Master’s degree, though he’s not quite sure what direction it will take. But until then, Gomez continues to give back via other outreach efforts.

Another great mentor, Dr. Steven V. Edelman, an endocrinologist, diabetes expert and UCSD professor, also encouraged Gomez “to give more of myself than just what is acceptable.” He asked Gomez to join his Taking Control of Your Diabetes (TCOYD) organization because he saw that Gomez wanted to do more for the Hispanic community

As faculty member with the San Diego TCOYD program, Gomez lectures at ongoing events to help Hispanics and Latinos, who suffer a relatively high incidence of type II diabetes.

Presentations focus on managing the disease more effectively, including its emotional impact. At a related “boot camp,” Gomez teaches people how to eat healthy, cook, inject insulin, exercise and better manage the disease.

Gomez also volunteers for Partners in Health, among the most well known global public health organization, participating in a local chapter’s effort to raise funds for Ebola victims in Africa.

For a young doctor just starting his career, returning some of his expertise to the community is a natural part of who he is, and also of being an immigrant, and a Latino. “I’m helping fellow Hispanic people, helping medical and premed students learn, and I’m doing what I enjoy.