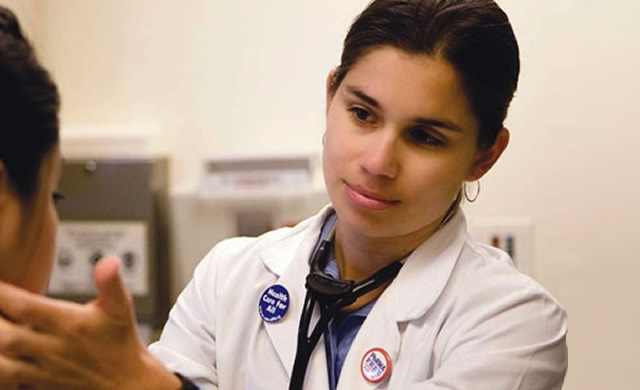 One of the results of having a burgeoning Hispanic population is the need for qualified Hispanic health care workers to address their medical needs, according to an articlein The Hispanic Outlook in Higher Education. It's not only a matter of being able to communicate with patients in Spanish, it is also a matter of being intimately acquainted with Hispanic culture that makes Hispanic health care workers so essential for the health and welfare of our changing demographics. And unless the number of Hispanics entering health fields increases, the U.S. faces a healthcare shortage within the next decade.

Any new attempt to add health care jobs has been hampered by the Great Recession of 2009. Industries that lost jobs for Hispanics during that period included hospitals and other health services workers (88,000). In addition to a general shortage of Hispanic health care workers, there is the added problem that of where health care workers are based, according to the Pew Hispanic Center. For instance, again according to Pew, there are 93 primary care physicians per 100,000 people in cities or sub- urban metropolitan areas, compared with 55 primary care physicians per people in nonmetropolitan or rural areas, and a wider variation of specialists, at 200 per 100,000 in metropolitan areas and 33 in nonmetropolitan areas.

The good news for Hispanics is that they are gaining back those jobs. From the fourth quarter of 2009 to the fourth quarter of 2011, the Hispanic working-age population increased 6 percent, and employment increased 6.5 percent. Hispanics and Asian- Americans are also the only groups to realize more employment gains than the number of jobs lost in the recession. Hispanics lost 473,000 jobs in the months of the greatest impact of the Great Recession but were able to claw back 1.3 million jobs as the country went through a slow recovery.

And in implications for immigration reform, workers not born in this country are becoming employed during this recovery quicker than those who are born in this country. That fact could account for the push back, politically, pending immigration legislation has experienced - fairly or unfairly. The news for women is also not encouraging. Men are getting their jobs back or becoming first-time employees at a more robust rate than women as the economy gets back on track.

The report, Closing the Health Care Workforce Gap Reforming Federal Health Care Workforce Policies to Meet the Needs of the 21st Century notes that the current proportion of U.S. physicians who are minorities is the same as it was 100 years ago. Although one-fourth of the U.S. population is made up of minority groups, less than 7 percent of minorities including Hispanics, African-Americans and Asian-Americans are enrolled in medical training programs.

As the American Progress report explains, "Reducing the poorer health outcomes suffered by minority, low-income, and rural populations will require new investments to assure a more diverse health professions workforce, more reflective and representative of our population. These outcomes should be tracked as part of the evaluation and ranking of health professions training programs receiving government support. More than 20 percent of the U.S. population, or 64 million people, live in areas designated by the federal government as health professions shortage areas, struggling every day without access to adequate medical care. Another 48 million lack access to dental care and 77 million are without access to behavioral and mental health services. Physician, dentist, and nursing supply vary two to threefold across regions."