Vice Chair of Faculty Development in the Department of Surgery, and Professor in the Division of Gynecologic Oncology, Gynecology and Reproductive Sciences 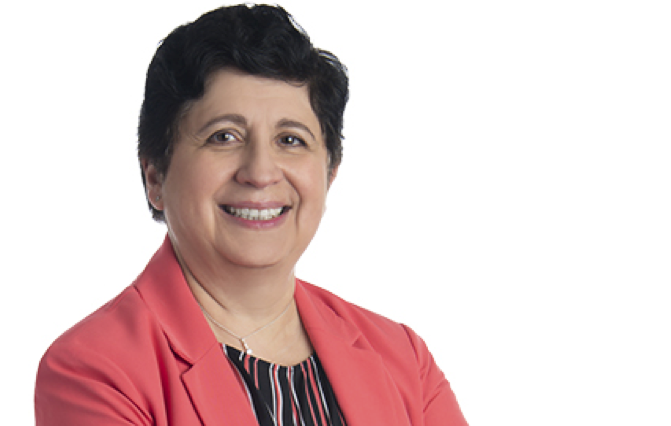 From sneaking under curtains as a child exploring a hospital, to directing life-saving research at one of the most prestigious cancer centers in the world, Dr. Lorna Rodriguez-Rodriguez has never stopped following her curiosity.

This intrepid spirit has been evident since her earliest days.

As the youngest in her family by several years, she spent many hours exploring her surroundings. Her parents had been high school sweethearts who married young and had kids back to back. Their second, her brother, was born with physical disabilities and they spent a lot of time caring for him – with the help of healthcare workers and friends in the small town where they lived in Puerto Rico.

When Lorna came along 12 years later, her parents were not struggling in quite the same way anymore – though they were working hard putting themselves through school and still had to spend a lot of time in the hospital taking care of her brother.

Young Lorna noticed the pain on her parents’ faces whenever they had to bring her brother to the hospital. But she also noticed that when the doctors came and talked with them, the pain on their faces turned into relief.

“I wanted to be that person who would make people feel so much safer and calmer.”

But that’s not all she noticed while spending so much time in the hospital as a child.

“While my parents were distracted with my brother, I was a little devil and always snuck out,” she said. “I was very tiny, so I could go under the curtains and watch doctors in action, almost like a ninja. I was so curious.”

She spent so much time poking around that everyone knew her there. One time while she was waiting with her family, a nurse pointed her toward a doctor who was stitching up a wound and invited her to watch. The doctor jokingly asked her if she wanted to help with the stitches.

“I said, ‘Yes!’ Even though I was scared because I didn’t know how. Of course he didn’t really let me do it. He laughed and took me by the hand and led me back to my parents and told them the story. But at that moment he had put that drive in me: I wanted to do this. I wanted to be him. And here I am.”

Here she is, indeed.

Today she is a surgeon specializing in cancers related to female reproductive organs – a specialization known as gynecological oncology, which includes cancer of the uterus, cervix and ovaries. She is particularly focused on ovarian cancer, serving as clinician, instructor and researcher at several of America's leading medical institutions over the past 30 years.

In 2019, she joined City of Hope – a world leader in the research and treatment of cancer, diabetes and other life-threatening diseases. She is vice chair of the Department of Surgery and a professor in the Division of Gynecologic Oncology, Gynecology and Reproductive Sciences.

Originally she wanted to be a pediatrician like the doctor who had helped her family.

She attended medical school in Puerto Rico, and during that time she studied and worked at a free hospital in a ward filled with beds separated by curtains. There was no air conditioning – just windows to let the island breeze blow through.

During her gynecology rotation, she met several women with advanced cancer. One woman in particular was having a hard time and was so isolated due to the condition of her illness.

“I made a point to spend time with her every day,” she said. “It just broke my heart. I learned that ovarian cancer is a very difficult cancer and people tend to have hard lives after the diagnosis. I thought: I have to cure this disease. So I have dedicated my life to it.”

She also wants to understand the importance of racial and ethnic differences in clinical outcomes. She’s interested in exploring tumors at the DNA level, to see if treatments can be more precise.

“I want to test tumors from Latina and African American women and see the difference between them and tumors from Caucasian women,” she explained. “Once we classify all the tumors we might start understanding how to treat individuals. Instead of saying you have breast cancer, our goal is to be able to say you have breast cancer that has code ABC rather than code XYZ, for example. Treatment can get more specific.”

She said there’s still so much to learn about gynecological cancers and ethnic background – not just DNA, but also the many ways our culture affects how and where we live and what we eat.

“All of that appears to have an effect,” she said, “but we still don’t know.”

In the meantime, she is determined to help people feel empowered to get what they need from their healthcare providers.

To that end, here’s her advice about how to advocate for better care for yourself and for your loved ones.

“Sometimes we just feel that something’s wrong, but we don’t feel heard. Maybe the doctor and patient don’t understand each other very well. But stand your ground, find your voice and say: ‘I don’t think you hear me, I’m worried, please explain that again.’ It’s okay, doctors can take it.”

·      Write down your questions in advance.

“Before you see the doctor, write down the questions you want answered. Show them the list and keep asking questions until you get the answers you need. If you don’t know English, get your questions translated and/or bring someone to help you communicate. Ask for a translator while you’re there.”

“Get your mammogram every year or so, to screen for breast cancer. Get your pap smear every one to three years, to screen for cervical cancer. And celebrate your 50th birthday with a colonoscopy, to screen for cancer of the colon and rectum.”

“If you’ve already gone through menopause (six months with no bleeding) and then you bleed just one drop, that’s not normal. It could be a sign of a cancer or a precancer. Don’t wait three months to see if it happens again, go to doctor right away and ask for a biopsy. Most times it won’t be a cancer, but if you do find it, it will be early and curable. Also, if you have sexual intercourse and you bleed after, that could be a sign that something is irritated in the cervix. Go to the doctor. Don’t miss the opportunity to be cured and stay healthy.”

She also encourages people of all ethnicities to consider careers in healthcare.

“If someone speaks your language and has common experiences, they’ll understand why you didn’t take your blood pressure meds last month. Instead of scolding you, they understand that your father was sick and you used the money to help him. Our behavior is complex, and the best way to break down these barriers of understanding is to have more perspectives represented.”

Whatever your curiosity happens to be – medicine, technology, event planning – there’s a place for you to pursue it in healthcare.