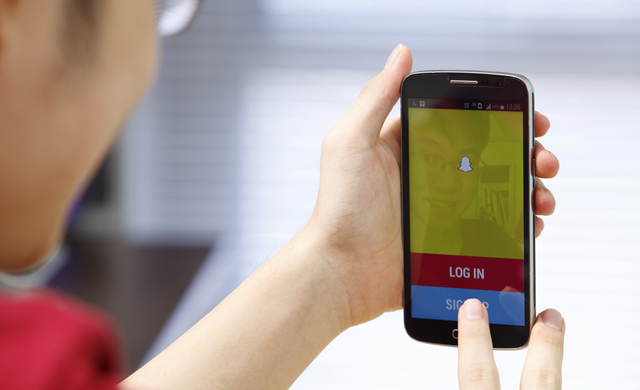 When Alex Cosentino visited the campus of the University of South Carolina earlier this year, the 18-year-old looked beyond the brochures and tour guides for a glimpse of what the school is really like. His source? The social media platform Snapchat.

"When you go on Snapchat, you see what students are actively doing that day," Cosentino said. "When I visited South Carolina, the Clintons happened to be in town, so you saw [stories] of all these students trying to meet them."

Checking Snapchat has become part of the daily routine for students like Cosentino, a senior at Matawan (N.J.) High School: 64% of Internet users between 18 and 24 now use Snapchat, up from just 24 percent in 2013, according to media analytics company comscore. That makes Snapchat second only to Facebook when it comes to social media popularity among students — and with features tailor-made to invoke school spirit, like geofilters, which are graphics (think school logos and mascots) overlaid on images, Snapchat is proving a powerful marketing tool for campus recruiters. "When I visited North Carolina, Northwestern and schools in Boston, they all had them," said Ella Brockway, 17, a junior at Red Bank Regional (N.J.) High School. "Snapchat as a whole is like a twenty-first century way to capture what a school has to offer."

Last winter, for example, Drake University used a geofilter to connect with potential students attending the state high girls' basketball championship in Des Moines, Iowa, overlaying an image of the school's bulldog mascot onto Snapchat images from the event. And during the recent commencement ceremony at the University of Michigan, parents and graduates could choose from three custom geofilters when posting pictures; over the course of six hours, the filters were used 2,200 times, resulting in more than 100,000 views.

"We have to go where kids are,'' said Joni Poorbaugh, assistant director of brand marketing at the University of Mount Union in Alliance, Ohio, "rather than hoping they will come to us."

This kind of corporate branding was almost unimaginable when Snapchat launched in 2011. Distinguished by its ephemeral nature — posts typically "disappear" within 24 hours — Snapchat quickly became infamous as a sexting tool for teens.

Today, however, this short shelf life is part of what makes Snapchat so appealing to recruiters, enabling colleges to create a sense of exclusivity and urgency. "In between classes you can watch it and talk to your friends," said University of Houston director of media relations P'nina Topham, "so we can hit the community very quickly on their phones wherever they are in a fun way."

But while Snapchat posts themselves are fleeting, schools are finding they lead to lasting results. Earlier this year, the over-the-top bench celebrations of the Monmouth University basketball team — featured on the school's Snapchat account — not only led to coverage on ESPN, but also thousands of new fans.

"When you post a tweet, maybe 1,000 of your 5,500 Twitter followers will look at it,'' said Gary Kowal, Monmouth's assistant athletic director for communication and new media. "Whereas if you post something on Snapchat and you have 2,000 followers, you'll get 1,900 views."

With more schools and brands becoming a presence on Snapchat, the question now is whether it will continue to be a platform favored by teens and college students as the older demographic starts climbing onboard.

"What I'm watching from technology standpoint is whether suddenly your parents and aunts and uncles and all these brands are on it, if students will change what they do on it,'' Snider said. "When mom joins, do you stop posting things in stories that you used to post?"

Ask current students, and it doesn't sound like Snapchat is going anywhere.

"I would say almost every high school student has Snapchat,'' said Pat McGowan, a senior at Middletown (N.J.) High School North. "Many students check Snapchat hourly. It basically allows you to see what goes on at the college almost live, so it's definitely effective."