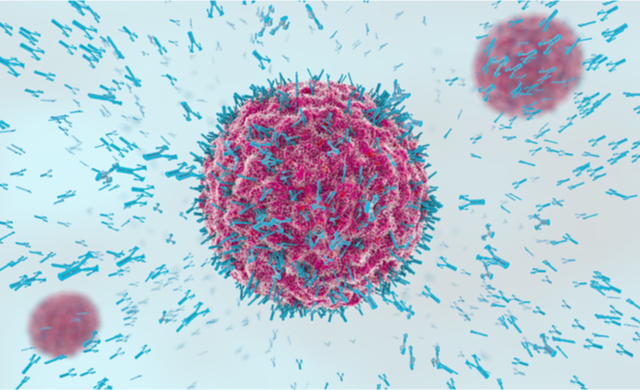 In early March, Kelly and about a dozen friends all became ill at the same time. One spent eight days in a coma. Her partner was sick for a month.

After they recovered, Kelly and her partner sought out an antibody test, which they hoped would determine if they’d developed immunity to the virus. Their motivation, Kelly says, was more than just curiosity.

“We wanted to contribute to the data, help the research,” she said.

Concern for others also influenced Los Angeles television reporter Joy Benedict, who shared a video of her own antibody test, which came back negative.

“I wanted to think I’ve already gone through this and maybe built up a little immunity,” she recalled. “But then, had I been positive I would have been sad because that means I could have exposed somebody else and never known it.

“But I took the test and now I know … and knowledge is power, so I have the power to do what’s best to keep myself and those I love healthy, and that’s to keep social distancing.”

No question, it would be wonderful if a simple test could tell us “you survived and now you’re immune”: a medical “all clear” allowing us to resume normal life.

So far there is no universally accepted, 100% accurate antibody test for COVID-19. Nothing currently available meets that standard, including several tests approved by the Food and Drug Administration. The FDA says such in carefully chosen language, emphasizing that, at best, a positive result indicates only that “the person has been exposed to the virus and developed antibodies against it, which may mean that person has at least some immunity to the coronavirus.”

Part of the difficulty lies in COVID-19’s not-so-unique structure, sharing common elements with the viruses behind SARS, MERS — and the common cold.

“The problem,” explained Don Diamond, Ph.D., professor, Department of Hematology & Hematopoietic Cell Transplantation, “is that four types of [human] coronaviruses are so similar, it won’t be easy to come up with a test that distinguishes between them. We don’t know yet how to interpret a positive result. We’ve seen patients who were supposedly ‘cleared’ who later showed signs of being infected again.” Other patients have taken multiple tests and received conflicting results.

“It may take a while to reach that level of specificity,” he said.

Antivirals AND Other Treatments

For people already infected and ill, a properly targeted antiviral drug — think Tamiflu for the flu — may one day stop COVID-19, employing any number of techniques to kill the invading virus or stop it from reproducing. Researchers hope to create such a drug or repurpose existing medications to do the job.

There was early excitement and hope that hydroxychloroquine — originally approved to treat malaria and now used for lupus — might work. Dozens of clinical trials are underway and some hospitals are giving it to their sickest patients. Actor Rita Wilson (who together with husband Tom Hanks recovered from the virus) received hydroxychloroquine as part of her treatment in Australia.

Hydroxychloroquine, however, can trigger serious, even deadly, heart complications. In mid-April 2020, a study of Veterans Administration hospitals strongly suggested that this drug, especially when combined with the well-known antibiotic Zithromax — which is how it’s often administered — may actually do more harm than good.

“Hydroxychloroquine will come out of circulation [as a possible treatment],” predicted Diamond.

Better results may come from clinical trials of remdesivir, an experimental drug tried — unsuccessfully — in the 2014 Ebola outbreak.

“Remdesivir interferes with a virus’s polymerase, or its system for building its genome,” explained Diamond. It’s a strategy employed by some anti-HIV drugs, and a few studies have indicated it may be effective against COVID-19. We won’t know for sure until we gather data from widespread, randomized placebo-controlled trials.

Researchers are also examining various immunotherapy drugs, because some of the worst harm done by COVID-19 happens when the body’s immune system overreacts to it, damaging the lungs and other organs. “The idea,” said Diamond, “is to suppress inappropriate immunity and get the system back to square one, relieving symptoms and buying the patient some time.”

When an accurate antibody test does emerge, so may another treatment option: convalescent plasma. This would involve taking blood from recovered patients and injecting it into people currently infected to stimulate antibody production. The FDA has not yet approved this treatment, but the agency did publish recommendations for health care providers and investigators considering it. As a result, City of Hope is developing a multidisciplinary program for collection of convalescent plasma in its Michael Amini Transfusion Medicine Center.

“This convalescent plasma approach to treatment makes sense because it has been effective in other viral disease,” said Stanley Hamilton, M.D., chair of the Department of Pathology at City of Hope. “The challenge with SARS-CoV-2 is that there are so many unknowns about the virus and the immune responses to it. The antibodies that testing detects in plasma must have the ability to recognize and have effects on that specific coronavirus, and it must be present in sufficient quantity.”

At this point, high-quality data from clinical trials that show efficacy from plasma or antibody concentrate is what’s needed, he added.

In a recent poll, 72% of those questioned said they wouldn’t attend a baseball game until a coronavirus vaccine is developed. It’s easy to understand why. More than any other treatment, only an effective vaccine — said to be at least a year away — makes most people feel truly safe.

There’s no shortage of effort in that direction. By one count, more than 70 potential vaccines are in development worldwide. A handful have begun clinical trials and at least one, from drug developer Moderna, has received substantial government help: a $483 million federal grant to build infrastructure so the company can rapidly ramp up production if the vaccine succeeds.

City of Hope is part of this fight. Diamond leads a team that’s developing a vaccine with a proprietary delivery platform, one that he’s used successfully in previous vaccines for cancer and other diseases.

The work is “going very fast,” he said. “I am blessed with co-workers capable of moving as quickly as resources permit.”

Nevertheless, Diamond and all vaccine researchers face many unknowns with this still-new virus: Will a vaccine provide total protective immunity? How long will it last? Could the virus mutate? (Unlikely, says Diamond: COVID-19 is less mutable than other viruses. However, that could change if the virus begins to react to the many antiviral drugs that will soon be thrown at it.)

Bottom line for now, perhaps the best advice is to stay hopeful and be patient, however difficult that may be.

“Although we continue not to know a whole lot,” Diamond said, “there is promise of a vaccine coming. There is promise of antivirals being developed. As time goes on, we’ll get more. And an accurate antibody test is achievable, one that can tell if you’re incapable of being reinfected.