Kids Should Be Starting Swimming Lessons Earlier Than You Think, According to New Guidelines 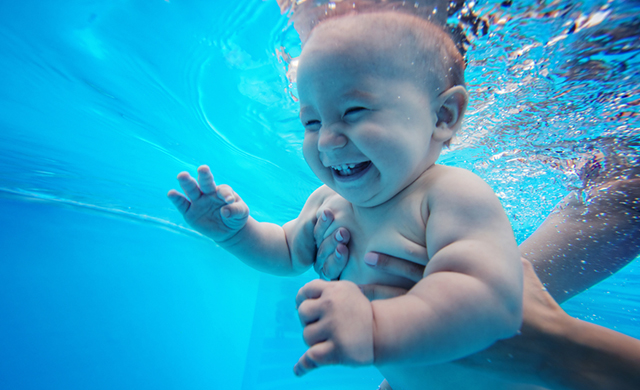 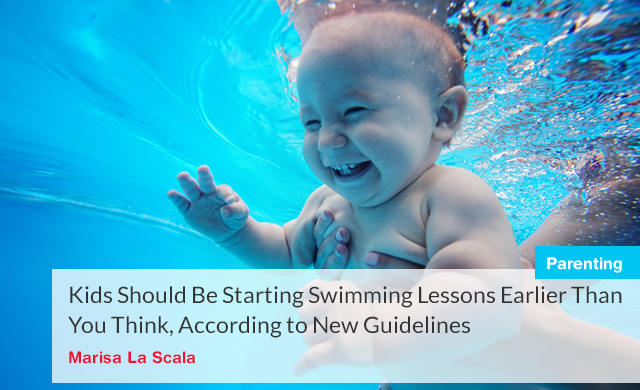 New guidelines from the American Academy of Pediatrics say you can take kids to baby swimming lessons staring at one year old. They won't be able to do it on their own, but it's about getting them comfortable in water.

As your baby becomes a toddler, baby-proofing the house becomes more important than ever. And this is especially true when you head outdoors this summer to hit the beach or pool. According to the Centers for Disease Control and Prevention, drowning is the leading cause of injury death in children ages one to four.

That's why the American Academy of Pediatrics (AAP) recently updated its drowning-prevention guidelines, noting that kids can now start swimming lessons at one year old, which is a change from their previous recommendations. Keep reading to learn why the AAP revised their guidelines, plus more water safety tips for babies.

Why the AAP changed its mind on the best time to start swimming lessons.

Previously, the AAP cautioned against swimming lessons for those under the age of four because kids that young can't really learn to swim (though they can be taught how to float and blow bubbles). Plus, there was concern that parents would become less vigilant about supervising a child who had taken swim lessons.

In the new report, "the AAP reinforces its existing recommendation that most children age 4 and older should learn to swim, but the AAP is now more open toward classes for younger children."

The guidelines also state: "New evidence shows that children ages 1 to 4 may be less likely to drown if they have had formal swimming instruction."

What you can expect your child to learn at baby swimming lessons.

"It's all about building confidence by teaching kids to feel comfortable in the water," says Emily Leaman, co-founder and COO of Fitness Alive Philly, which starts classes for babies as young as five months. "In our experience, kids learn the actual mechanics of swimming more quickly if they are confident first. A water-confident child is also less likely to panic in an emergency situation."

What does a one to three-year-old learn in swim class? "At the toddler age, kids can learn to blow bubbles - push water out of their mouths - kick strongly, and float on their backs," Leaman says. "Strong toddlers can learn to pull themselves out of the pool, too."

It's important to note that these are all supervised skills. "Even advanced swimming skills cannot ‘drown-proof’ a child of any age," says Jeffrey Weiss, MD, FAAP, lead author of the AAP's policy statement and technical report.

The AAP also notes that parents should observe swimming children at all times, and remain within arm's length of infants, toddlers, and weak swimmers. The organization also warns against so-called "water-survival" classes - the kind that might dunk a baby under water or try to teach an infant to roll over on its back alone. "The water-survival skills programs for infants may make compelling videos for the Internet, but no scientific study has yet demonstrated these classes are effective," the policy states.

Stay safe during non-swimming times, too.

The AAP recommends making sure that kids are safe when swim time is over, too. Sadly, many drownings happen when families aren't at the pool or beach – kids can have accidents and fall into baths or other reserves of water.

Make sure your kids don't have access to water when they're not supervised-that means getting rid of standing water (no full bathtubs or buckets) and putting four-sided barriers around pools and spas. The AAP also recommends learning CPR for emergency situations; you can find CPR classes at your local chapter of the Red Cross.

Moms Are Not Okay: Why COVID-19 Pandemic is Worse for Mental Health of Latino Mothers

5 Things to Encourage Your College-Aged Student to Focus On

Talking to your kids about racism