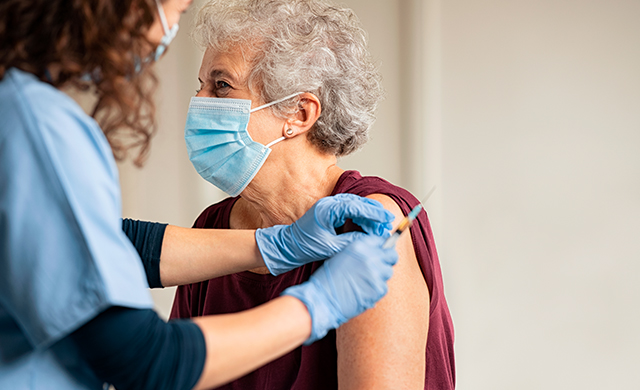 April 23, 2021 -- the Virginia Department of Health website in January reassured English-speaking readers that the COVID-19 vaccine "will not be required for Virginians."

But the Spanish-language translation, through a Google Translate widget at the top of the page, said something else: The vaccine "no sera necesario," or "won't be necessary."

Sharp-eyed students at George Mason University caught the garbled translation and brought it to the attention of their professor, who alerted the state health department. The phrasing was quickly fixed, and the website now has professional translation of its COVID-19 informational materials. The incident was first reported by The Virginian-Pilot newspaper.

While the mistake was a temporary embarrassment for Virginia's vaccination campaign, the faulty translation is emblematic of a much larger problem in the nation's rollout: Getting a vaccine in the United States has several hurdles for people who aren't fluent in English.

Lack of language access to vaccine information wasn't necessarily the result of poor pandemic planning. In part, it was intentional. In 2020, the Trump administration removed language-access protections that had been written into the Affordable Care Act (ACA).

Since the passage of the Civil Rights Act in the 1960s, federal laws have protected people from discrimination based on their country of origin. Decades later, the ACA took those protections and applied them in specific ways to health care.

The law says any health care organization receiving federal funding had to include a tagline on significant documents in the top 15 languages of the state they were working in that notified people they had a right to an interpreter and free assistance in their own language.

"That was stripped in August of 2020, and in December of 2020 we started rolling out a massive vaccination campaign," said Denny Chan, an attorney and equity advocate at the California nonprofit Justice in Aging. "Some of that shot us in the foot."

Hispanic peoplehave the highest rates of new COVID-19 cases in the United States, and many are being left behind by the vaccine rollout.

About one-third of all people who identify as Hispanic in the United States have limited English proficiency, according to the Pew Research Center.

US Census data shows 25 million people across all racial and ethnic groups, or 1 in 13 in the United States, aren't able to communicate well in English.

Justice in Aging and the nonprofit Center for Medicare Advocacy sued the Department of Health and Human Services in February to restore the language access protections.

Chan said health care providers are still free to provide language assistance to patients who need it. They aren't prevented from doing that.

But the law set a floor of requirements that weren't in place when officials were building the infrastructure and logistics behind the massive Operation Warp Speed vaccine rollout.

"If you're not required to the same degree to make sure that people know their rights to interpreter services or have translated documents," it doesn't get baked in as a priority, Chan said. "At multiple points in the process, we've seen the language access piece fall apart."

A WebMD/Medscape review of vaccine-finder websites available through health departments in all 50 states found that the majority offered some language translation, but there were three states that at the time of the review had no language help on their vaccination finders: Alabama, New Jersey, and South Dakota. New Jersey has a tab to translate the website into Spanish, but it didn't work on several different web browsers at the time we reported the story.

In Arizona, you can make vaccine appointments by registering through a Spanish-language patient portal, after you give the state personal information such as an email and phone number, but the more accessible Department of Health Services vaccine-finder page, which shows a map of vaccination sites through the state, doesn't translate into Spanish.

In Arizona, about 1 in 3 people are Hispanic. The state's vaccination data show that 48% of people who have had at least one dose are white, while 12% are Hispanic.

Georgia had no language translation on its vaccine-finder website until a coalition of Latino community advocates wrote a letter to the governor to complain. Now the site translates, but only into Spanish, still excluding people who speak other languages.

Even VaccineFinder.org, which is the national site that the CDC links to, doesn't translate into other languages.

The Kansas Department of Health directs people to both the English VaccineFinder.org and the Spanish-language site hosted by Univision.

Many other county and state health department websites rely on Google Translate to make their information available to people with limited English proficiency.

Google Translate can be helpful, but only if someone has a high reading level. It can also be very literal — it sometimes can't distinguish the verb book from the noun book, for example, which can confuse the meaning of a sentence.

The other problem with relying on Google Translate is a technical one. The software can be problematic for vaccine finders because it only recognizes and translates text. It doesn't translate the maps or charts many states have built to direct people to vaccination sites.

"It's about making vaccination as easy and accessible to people as possible, right?" said Barbara Baquero, PhD, an associate professor of health services at the University of Washington in Seattle and vice president of the Latino Caucus of the American Public Health Association.

"Asking Google Translate to do all the work for the state on the website, I think, is negligent," she said.

Washington enacted a law in 2004 that requires language access for the most commonly spoken languages in the district — Spanish, Chinese, Vietnamese, Korean, French, and Amharic. On April 8, the D.C. Language Access Coaltion sent a letter to Mayor Muriel Bowser saying that a Google Translate button didn't make the district's vaccine website accessible enough to people who don't speak English well.

The district has since agreed to provide professional translations for information on the site.

Though language is just one facet of the problems that are contributing to vaccination disparities, it's foundational, Baquero said.

"Language is at the center of this right?" she said. "We see many difficulties that began with language access."

Fernando Soto, a journalist who founded the website Nuestro Estado ("Our State") to bring Spanish-language news to South Carolinians, has seen these hardships firsthand.

Soto heard from so many of his readers that they were having trouble signing up for vaccines that he started putting his phone number on social media to help people sign up.

He says he's helped more than 60 people book appointments, and saw the difficulties they encountered at each step of the process.

"All of the registration that's available now is all in English, or if there's a Spanish version, there's language that excludes a large portion of the population," he said.

Some of the more common problems he's seen are sites that neglect to say that the vaccine is free or that ask for a Social Security number to register, even though that's not required for vaccination.

The South Carolina Department of Health and Environmental Control (DHEC) has a vaccine-finder website that can be translated into Spanish, but it sometimes links to sites that are only in English, such as the main page for Prisma Health vaccine sites, a large health system in the state.

Soto recently signed up dozens of people for a weekend pop-up clinic run by DHEC, and then showed up to help with another hurdle: Vaccination sites often have little to no language translation for people once they get there.

The consent forms and vaccination cards have Spanish translations, but, he said, there wasn't anyone to walk people through the process or to explain that they needed to wait for 15 minutes after their shots so they could be monitored for adverse reactions.

People who identify themselves as Hispanic make up almost 6% of South Carolina's population, but have gotten less than 2% of the state's vaccinations, Soto said.

Laura Camarata, an investigator at Children's Law Center in Washington, D.C., has been helping people who don't speak English well to sign up for the vaccine. She's been hearing many of the same things. Even if they're able to sign up for an appointment, it's really hard to get information once there.

"Will the vaccine interact in any way with this condition or with this medication? Really questions that, unfortunately, because of the language, those people weren't in a position to ask at the clinic," she said.

At least one clinic — Bread for the City— decided to opt out of Washington, D.C.'s vaccine sign-up system to better serve its own patients. When Bread for the City was listed as a vaccination site on the District's vaccine finder, white, more affluent people were the ones booking appointments. So clinic administrators opted out of the system and started proactively calling their patients, offering them first dibs. They said it has worked much better.

In addition to language problems, people who aren't fluent in English are still wary of the rules put into place during the Trump administration. Under the public charge rules, once someone accepts federal benefits, immigration authorities counted that negatively when considering citizenship applications.

The public charge rules were abandoned by President Joe Biden on March 9, more than 3 months into the vaccine rollout. But people are still afraid that if they get a vaccine — a federal benefit — it will count against them in the eyes of immigration authorities.

"People are saying that Black and brown people, you know, are hesitant. The reality is that it's a minority of our community that's hesitant and then a significant portion of folks that are concerned, not necessarily about the COVID-19 vaccine, [but] about the system around it," said Gilda Pedraza, executive director of the Latino Community Fund in Atlanta.