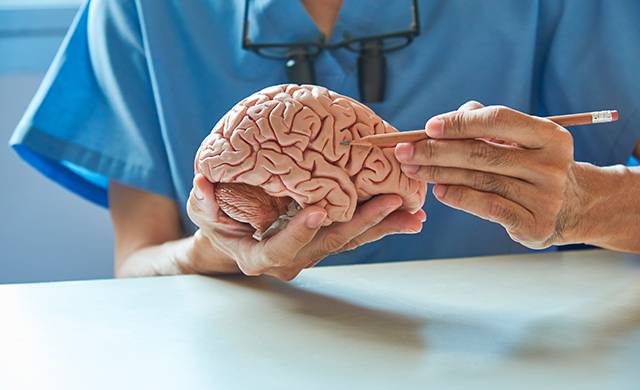 At Boston University, a team of researchers is working to better understand how language and speech is processed in the brain, and how to best rehabilitate people who have lost their ability to communicate due to brain damage caused by a stroke, trauma, or another type of brain injury.

This type of language loss is called aphasia, a long-term neurological disorder caused by damage to the part of the brain responsible for language production and processing that impacts over a million people in the US.

"It's a huge problem," says Swathi Kiran, director of BU's Aphasia Research Lab, and College of Health & Rehabilitation Sciences: Sargent College associate dean for research and James and Cecilia Tse Ying Professor in Neurorehabilitation. "It's something our lab is working to tackle at multiple levels."

For the last decade, Kiran and her team have studied the brain to see how it changes as people's language skills improve with speech therapy. More recently, they've developed new methods to predict a person's ability to improve even before they start therapy.

In a new paper published in Scientific Reports, Kiran and collaborators at BU and the University of Texas at Austin report they can predict language recovery in Hispanic patients who speak both English and Spanish fluently--a group of aphasia patients particularly at risk of long-term language loss--using sophisticated computer models of the brain.

They say the breakthrough could be a game changer for the field of speech therapy and for stroke survivors impacted by aphasia.

"This [paper] uses computational modeling to predict rehabilitation outcomes in a population of neurological disorders that are really underserved."

In the US, Hispanic stroke survivors are nearly two times less likely to be insured than all other racial or ethnic groups, Kiran says, and therefore they experience greater difficulties in accessing language rehabilitation.

On top of that, oftentimes speech therapy is only available in one language, even though patients may speak multiple languages at home, making it difficult for clinicians to prioritize which language a patient should receive therapy in.

This first-of-its-kind technology addresses that need by using sophisticated neural network models that simulate the brain of a bilingual person that is language impaired, and their brain's response to therapy in English and Spanish.

The model can then identify the optimal language to target during treatment, and predict the outcome after therapy to forecast how well a person will recover their language skills. They found that the models predicted treatment effects accurately in the treated language, meaning these computational tools could guide healthcare providers to prescribe the best possible rehabilitation plan.

"There is more recognition with the pandemic that people from different populations--whether [those be differences of] race, ethnicity, different disability, socioeconomic status--don't receive the same level of [healthcare]," says Kiran. "The problem we're trying to solve here is, for our patients, health disparities at their worst; they are from a population that, the data shows, does not have great access to care, and they have communication problems [due to aphasia]."

As part of this work, the team is examining how recovery in one language impacts recovery of the other--will learning the word "dog" in English lead to a patient recalling the word "perro," the word for dog in Spanish?

"If you're bilingual you may go back and forth between languages, and what we're trying to do [in our lab] is use that as a therapy piece," says Kiran.

Clinical trials using this technology are already underway, which will soon provide an even clearer picture of how the models can potentially be implemented in hospital and clinical settings.

"We are trying to develop effective therapy programs, but we also try to deal with the patient as a whole," Kiran says. "This is why we care deeply about these health disparities and the patient's overall well-being."