Kids at Risk of Depression More likely to be Bullied 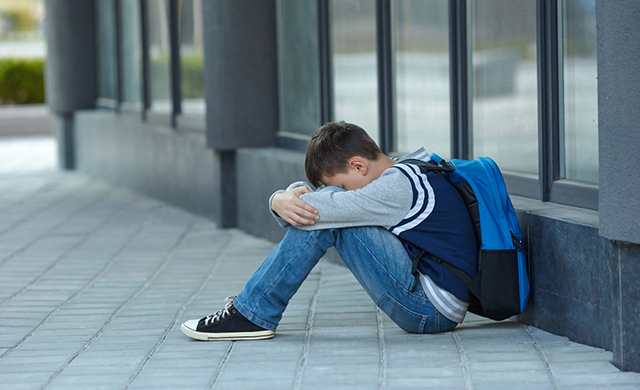 Spanking children could raise the risk of antisocial behavior in adulthood, scientists believe. Children at risk of developing mental health disorders such as depression and ADHD are more likely to be bullied, according to scientists.

The researchers studied 5,028 children of European ancestry from the Avon region of the U.K., who were taking part in the 14,062-participant Avon Longitudinal Study of Parents and Children. The participants were born between April 1, 1991, and December 31, 1992.

The authors of the study, published in the journal JAMA Psychiatry, defined bullying as “repeated, intentional aggression by a more powerful bully against a less powerful individual," and highlighted as many as one in five adolescents suffer physical or verbal abuse.

Dr. Tabea Schoeler, a research associate in the Faculty of Brain Sciences at University College London who co-authored the study, told Newsweek: “Compared to previous investigations, this study investigated more systematically the individual vulnerabilities and traits contributing to bullying victimization. We used genetically informed designs to better identify these individual vulnerabilities and traits."

The children filled out questionnaires on bullying at the ages of 8, 10 and 13. The researchers used this data to score how much bullying the children encountered on average. The participants were asked whether they had been bullied in the past six months, including overt actions such having their personal items stolen or being purposefully excluded by other children. Researchers also studied the children's genetic information.

Kids who were at the greatest risk of developing mental health conditions such as depression and attention-deficit hyperactivity disorder (ADHD) were also more likely to be bullied, the team found. Children with a high BMI, likely meaning they were overweight, also had a higher chance of being targeted.

That could be because children with depression are more likely to become internalized, while those with ADHD could have externalizing symptoms, which respectively make them a target for bullies, the authors said.

However, children at higher risk of developing bipolar disorder, autism, obsessive compulsive disorder or demonstrating neuroticism did not have a greater chance of being picked on. That might be because the symptoms of conditions such as bipolar don’t develop until early adulthood, the authors argued. Higher intelligence, meanwhile, was linked to a lower risk of being bullied.

“In contrast, we did not find an effect of other factors previously implicated in bullying victimization (e.g. neuroticism). This suggests that previously reported associations might be driven by co-occurring mental health symptoms that were not simultaneously considered.”

However, Schoeler stressed the study does not explain how pre-existing mental health problems increase the risk of bullying: a question that future research could attempt to answer.

The research offers a new insight into potential methods for tackling bullying, she continued. "Our findings are part of a body of research suggesting that individualized approaches may be important in the future. For example, offering mental health support to those most vulnerable will help to reduce their symptoms and potentially lower the risk of exposure to bullying.”

Dr. Louise Arseneault of the Institute of Psychiatry, Psychology and Neuroscience at King's College London, who was not involved in the research, told Newsweek: “This is an important paper that convincingly shows being bullied in childhood and adolescence is not just about being at the wrong place and at the wrong time.

“Findings showing that polygenic scores for mental health problems (e.g., depression, ADHD), IQ, and BMI are associated with exposure to bullying support a current movement that proposes a shift in the focus of anti-bullying policies from reactive interventions to prevention programs. Research has previously identified factors that can make some children more likely to be bullied. This study adds important support to this body of evidence using genetically-informative data."

Pointing out the limitations of the study, Professor Dieter Wolke from the Department of Psychology at the University of Warwick, U.K., told Newsweek: “It is a basic science study that shows that the heritability (not knowing which genes are involved) is very partly explained now by some genes that were chosen and seem to be related to mental health.

"But what is called the heritability gap remains huge. While about 60 to 70 percent of bullying may be explained by heritability, very little evidence is explained by the genes identified—all genes have small effects."

“Nevertheless, it shows real genes are involved," he said.

Wolke stressed the study doesn’t show bullying is inherited, but "rather children who have ADHD or depression give signs to others (e.g. being annoying by hyperactivity) or easily withdraw and cry that they are easy targets and thus become victims. Thus it is an indirect relationship."

Whitney-Crenna Jennings, senior researcher for Mental Health, Wellbeing and Inclusion at the Education Policy Institute think-tank, told Newsweek: “Research has shown that bullying has deeply negative and long-lasting consequences for those who experience it, and is likely to further exacerbate mental health problems.

"We welcome recommendations to address existing vulnerabilities among those who may be particularly exposed to bullying. Additional interventions that involve all parties, are based on empathy and understanding, and place less emphasis on punitive action, are also likely to be effective."