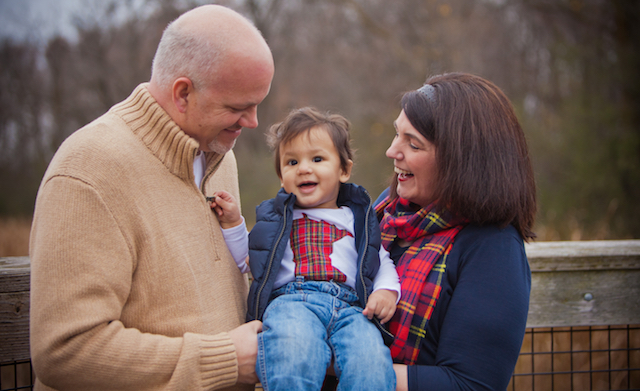 Those were the words we posted to make our long-awaited pregnancy announcement. “At Last” was also the song my husband Steve and I danced to at our wedding. It just happened to be on the list of songs the DJ offered—it hadn’t carried any particular meaning for us at the time. But six years into our marriage, the words were full of meaning.

We had just announced online that our baby was on the way, by way of a gestational surrogate, after many heartbreaks. I was scared to make it public. To me it was like I was saying I’m broken, because somebody else was carrying my baby. I was so emotional I buried my phone at the bottom of my purse. My heart was terrified of the reaction we might get.

Then a friend sent me an email: “You’re Kim Kardashian-ing the Internet right now.” So I let myself look online. The positive response to our post was overwhelming.

Steve and I married later in life: I was 37 and he was 39. When we met, Steve was already a dad to the most amazing 14-year-old son. To get pregnant, given our ages plus Steve’s prior vasectomy, we were advised to move forward with IVF—in vitro fertilization. I thought, Okay, I’m one of four kids, my mom was a Fertile Myrtle … it shouldn’t be a problem.

Our first IVF didn’t work. For our second try, I needed to boost my iron levels. That didn’t work either. I had a busy job that required a lot of travel, so I thought it must be the stress. I changed jobs, gave myself six months to get calm, and all would be well. Still, the third round of IVF didn’t work. The doctor said those oh-so-frustrating words: “I see no reason why you’re not pregnant.”

At this point I was 40 years old. We’d been funding these attempts with personal loans, shiny new credit cards, refinancing our house, and taking money out of our 401(k). The average cost for one IVF cycle in the United States is $10,000-$15,000, according to the Society for Assisted Reproductive Technology. We had to have an honest conversation about our next steps. I wanted to try one more time.

We tried. It didn’t work.

It’s one thing to get the call telling you you’re not pregnant. It’s another thing to be facing total despair, with no more money. I wasn’t ready to give up, but I was ready to make the hardest decision I’ve ever made: no more fertility treatments.

I had been putting spokes out into the world for a while, talking to an adoption agency, corresponding with surrogacy organizations, filling out applications for fertility grants (yes, they exist). We considered adoption, but to me it felt like another journey that would end in heartache. Adoption wouldn’t be guaranteed, and at that point I needed a guarantee—or the closest you can get when it comes to starting a family.

We Had One Last Fight in Us

The next try needed to work.We chose surrogacy.

I had been in contact with World of Surrogacy, an agency that specializes in international surrogacy, focusing especially in India. The fertilization would happen through the process of DNA cryopreservation. Can you imagine shipping your DNA to the other side of the world, knowing it will be transferred to a gestational surrogate who will ultimately give birth to your child? The power of modern medicine is beautiful.

We found out at the last minute we needed to go there in person to register our intent to use an Indian surrogate. We hadn’t originally planned (or budgeted) for this first trip. It seemed like an inconvenience at the time. We flew 20+ hours for a meeting with the Foreigner Regional Registration Office—which is basically the equivalent of flying all that way for an appointment at the DMV.

What we didn’t expect was to fall in love at first sight with India. The sights, the sounds, the horns, the people, the colors, the smells, the children, the gods, the organized chaos. We were also able to meet our doctors and our surrogate, which connected us to this process on a much deeper level. A few months later, back home, we got the news: our surrogate was pregnant with our child.

What (and when) do you tell people? At this point only a few close friends and family knew what we were doing. A dear friend designed for us a beautiful card with an image of an elephant over the map of India. Once we saw it we wept because this was us, this was our journey, and this was how the story of our little family would unfold. Our son, Harrison (Harry) was born in January 2016.

A few things we learned along the way:

It was a long, crazy journey, but it opened me up to a whole new beautiful world.