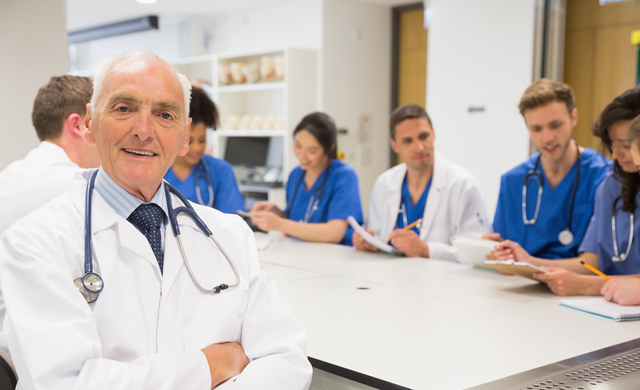 As a medical student at the Johns Hopkins University School of Medicine in Baltimore, Lynn Pauls provided city residents with a service she didn't have as a child: health care.

"It was one of the first things that I learned was unequal about the world," says Pauls, who graduated from Johns Hopkins this year. "I grew up in a large family with four kids, and both my parents worked several jobs. We never had health insurance, and it really limited a lot of the classic experiences you're supposed to have in childhood, such as playing sports and going to different events."

Her parents worried about what would happen if she or a sibling got hurt, she says.

As a medical student, Pauls, who is African-American, was able to help others with limited health care options as well as connect with minorities interested in medicine.

She screened Baltimore residents for diabetes and performed physical examinations, and got involved with the Student National Medical Association, which focuses on supporting underrepresented minorities who want to be doctors and bringing health care to underserved communities.

Pauls is the type of student many medical schools want to recruit, according to a May report from the Association of American Medical Colleges.

More than 80 percent of the 137 schools that responded to a recent survey from the AAMC said they had or planned to have specific admission programs or policies for recruiting a diverse student body interested in caring for underserved populations within the next two years, the report states.

About 9 percent of physicians identified as black or African-American, American Indian or Alaska Native, and Hispanic or Latino, the AAMC stated in a 2014 report.

Schools employ various strategies to foster diversity, such as holistically reviewing applications – which entails closely examining an applicant's extracurricular activities and leadership experience in addition to test scores and grades – and having student groups on campus that focus on the needs of students of color.

"They bring in such a large percentage of underrepresented minorities as premeds," he says. Through JUMP, a program for undergrads at Johns Hopkins from underrepresented populations who are interested in health professions, medical school students can mentor those who aspire to be like them, says Teraguchi.

"I had them call the students and say, 'We want you to come to Hopkins,'" Teraguchi says. "It just shows that commitment and access to faculty that they may not get at other institutions."

For Yolanda Haywood, the school's first associate dean for diversity, inclusion and student affairs at the George Washington University School of Medicine and Health Sciences, teaching students about unconscious bias is an important part of the curriculum. This type of bias is implicit and may stem from someone's upbringing and values.

Haywood's office has introduced various trainings related to the topic. During the first and second years of medical school, GW students learn about cultural competence, unconscious bias and stereotypes, she says. Once students reach the clinical part of their studies, they take a workshop on unconscious biases. As fourth-year students, they can take an elective on the subject.

While the school has a history of inclusion – it has had an African-American dean and the current dean is gay – the administration believed the school could still improve, she says.

Some schools, however, haven't had a rich history of diversity and have improved their efforts in the last few years.

When Canterbury became the associate dean for admissions at the University of Virginia's medical school around 2003, "UVA was not a very diverse place," he says.

To increase the variety of students who entered the school – by ethnicity, geography, gender and class – he worked on recruitment.

"I recruited in the Northeast, and on the West Coast and in the central part of the country and in the Southeast and so forth. And we had just never done that before," says Canterbury, who became the school's senior associate dean for education about eight years ago.

The school now has an enrollment of about 20 percent underrepresented minorities, according to U.S. News data. It also has several groups for students of color and regularly teaches about diversity, Canterbury says. When students begin medical school at UVA, for example, they partake in a session on healthcare disparities, he says.

The school is eying how to increase the number of underrepresented faculty.

"The number of faculty from underrepresented groups in most medical schools is pretty small," Canterbury says.

Earlier this year, students at Harvard Medical School protested the lack of diversity among faculty as well as students.

"I think about 5 or 6 percent of our faculty come from an underrepresented group," Canterbury says.

Many schools are most focused on increasing the number of students from a diverse background, but Haywood, from George Washington University, says it's not all about numbers. People also need to be in a setting that will embrace them.

"The numbers are certainly important," she says. "More important, I think, is creating an environment where people can flourish. To me that's the underpinning of all this."

Searching for a medical school? Get our complete rankings of Best Medical Schools.