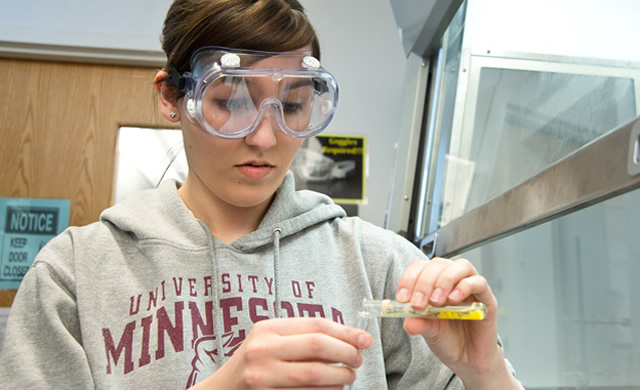 In some regards, UC Berkeley Ph.D. student Anastasia Chavez’s story should be commonplace: After graduating from college, the first in her family to get a college degree, Chavez went for her master’s degree at the behest of a “pretty amazing mentor” while marrying and starting a family.

Epitomizing the uniqueness of her story and ubiquitous problem facing universities across the country is the fact that this Latina student arrived at UC Berkeley’s math department among 161 Ph.D. students, 30 of which were women and six Chicano/Latino.

“My first year, all the thoughts I’d long had in my mind were amplified – ‘You don’t belong here.’ ‘People like you don’t get here.’ ‘You being here was a favor or a mistake,’” Chavez said in a press release,

While Chavez didn’t know it at the time, her academic career had inspired a model being studied by California colleges striving not only enroll more students in the fields of science, technology, engineering and math (also known as STEM fields) but also to provide a foundation for future diversity on campus.

The impetus behind the California Alliance for Graduate Education and the Professoriate consortium is to encourage under-represented minorities – Hispanics, African-Americans, American Indians, Pacific Islanders – to not only pursue Ph.D.s in STEM fields but to then take up professor positions or jobs in top laboratories.

“The impetus is essentially to bring together, in some kind of systematic coordinated way, universities that have historically and traditionally competed for minority students within the STEM fields,” said University of California Berkeley Psychology professor Rudy Mendoza-Denton, who is research director for the new group.

“The reality is that we have very few under-represented students within STEM fields, and even fewer of those students going into the professoriate and the national laboratories. This is an issue because part of the under-representation issue within STEM fields stems from the fact there are so few professors who are minorities at each university. So we really want to be able to open that pipeline.”

The statistics don’t lie regarding the need for diversity. The consortium’s four schools – Stanford, UCLA, Cal-Tech and Berkley – currently produce nearly 10 percent of the nation’s underrepresented minority Ph.D.s in the science and engineering fields.

Furthermore, in 2011 (the most recent data available), there were 845 new Ph.D. students in the targeted STEM fields but only 81 were from underrepresented minority groups.

The consortium, funded with a $2.2 million grant from the National Science Foundation, is targeting the issue of the lack of minority students on a number of fronts. The group is now identifying on-campus leaders as well as surveying currently enrolled minority students to examine attitudes and experiences.

Mendoza-Denton, a nationalized American citizen from Mexico, said the hope is the data will yield success stories regarding respective programs that can then be replicated at other schools.

As far as networking and creating opportunities for mentorship, California Alliance for Graduate Education and the Professoriate recently held a retreat with high school students, college students, graduate students and professors.Chavez added, “Everyone deserves access to someone who recognizes them, who says, ‘There are opportunities out there for you, and these are the things you need to do to get there.’ Somebody willing to take a little time to open eyes wider.”