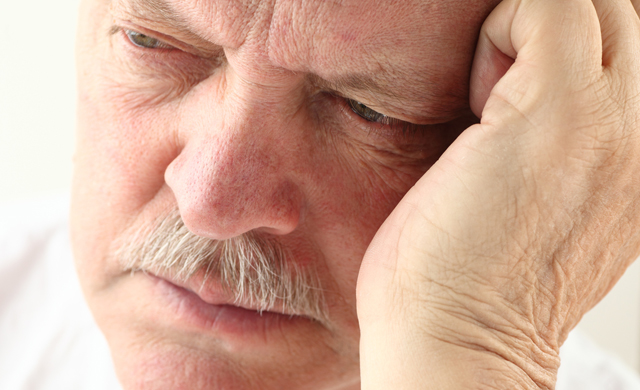 I remember as a child I couldn't wait to grow up so I could stay up past 9 pm, drive myself to the mall or the movies, and eat whatever I wanted. I never thought that as I grew up so would my parents, and as they aged that they might begin to fade as well.

Now, in my 40s, I have had to face the death of my mom from cancer, my father’s revelation that he has Parkinson’s, and the fact that some of my friends’ parents are also ill. It is because of this and them that we all must live healthier lives so that we can leave a healthy legacy for our children.

Recently, the father of a longtime family friend was diagnosed with Alzheimer's, which affects the brain and causes a person’s memory, thinking, and reasoning skills to deteriorate. Below is the story she shared on her blog about facing the fact that her father is fading fast.

We recently spent a week visiting my dad and stepmother at their home on the beautiful Gulf of Mexico in the Florida panhandle. While we were there, in a setting so beautiful and peaceful, I finally saw for myself the reality of what is happening to my father. About 1 1/2 years ago, my dad was diagnosed with "probable" early-onset Alzheimer's disease. I was not willing to accept this diagnosis.

At that time, much of his lapse in memory could be blamed on absent-mindedness.  He had always been the "absent minded professor," so I didn't want to believe that his memory issues were anything out of the ordinary.  He was getting older, and of course, memory issues usually come with age to some degree.  I struggled to make excuses for his apparently increasing lapses in memory.  My dad was forgetting things like dates and other seemingly minor or more common things for people to forget as they get older. I rationalized that he had depended on secretaries to keep his calendar and schedule for so long that it was natural for him not to remember things like what day of the week it was.

Just one year ago, my sisters and I visited my dad with our families, and I was able to explain away the little stream of forgetfulness we all saw widening into a river. Reality began to set in, however, last October, when I was speaking with my dad on the phone while I was in the car with one of the kids.  I felt like there were two different conversations going on at the same time. I would say something, and he would respond with something that seemed completely unrelated.  That was the first time I thought that maybe there was something deeper going on with my dad. He mostly stuck to easy, nonthreatening things like the weather.  He kept asking me if the kids were enjoying the trip.  I had to remind him a couple of times that I was with only one of our children and we were just taking our goats 1/2 hour away to get validated for 4H.  Three months later, at the follow up visit at the Mayo clinic, the doctors confirmed the diagnosis and said that my dad had declined significantly since the visit the year before, and that he was very progressed in the disease of Alzheimer's.

It really wasn't until this recent visit, however, that I truly saw how bad things are getting, and how far gone my father truly is.  Not once did my own father spontaneously refer to me by my own name!  He called me, "baby's mama" or even "hey, you!"  He was still laughing and gregarious, and we managed to get him out of the house and to the beach several times during our visit.  It was so sad for me to see him puttering about the house going through familiar motions over and over, such as watering his plants.  The problem is, he now repeats this little ritual a few times per day, and my stepmother tells me that he is actually killing some of the plants with over watering.  The rest of the day, he spends blankly staring at a TV he isn't really watching.  He sits in his favorite chair and stares at the screen; or he may turn and look out the window at the gorgeous view of the ocean beyond his back porch.  I know that when we aren't there, he spends hours like this.  It grieves my heart.

A few days ago, we were on FaceTime with my dad, and as the children came by one by one and spoke to him, he just smiled, laughed and had a grand old time.  At one point, he saw my face fill the screen, and he exclaimed, "Oh!  Look!  You haven't changed at all!  My daughter!  My daughter!"  My heart was filled with a mixture of happiness and grief.  He recognized me, but he didn't say my name.  I felt like I was watching my dad water skiing behind the boat, waving at me with a smile before he fell into the deep waters below.