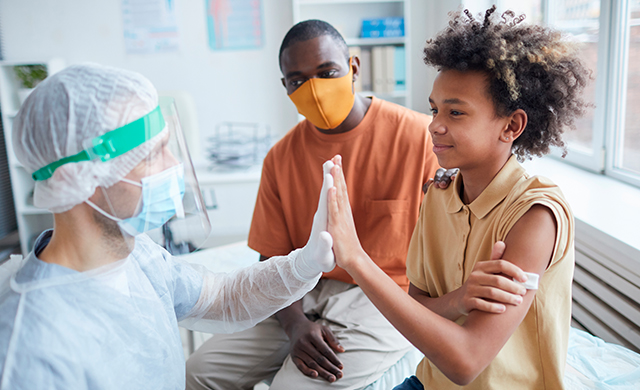 There are a lot of ways Dr. Kent Bream would describe the lines of people waiting, sometimes for hours, for COVID-19 vaccines at his community health clinic in West Philadelphia. Eager. Impatient. Frustrated, even. But "hesitant" doesn't come to mind.

As soon as the city started sending him doses, he says, demand was never an issue. In fact, Bream's clinic — which is located in a predominantly Black neighborhood — had more vaccines than it had staff to administer them.

"I said, send me vaccine and I will show you that there is not the level of vaccine hesitancy you think there is," recalls the medical director of Sayre Health Center.

Despite the high demand, the latest data show that 23% of vaccines are going to Black residents. Compare that to Philadelphia's total population, which is more than 40% Black. Vaccination rates for Black and Latino people in the city are still half what they are for whites.

While rates among Black, Latino and white residents are comparable among the older age brackets, the disparity is driven largely by younger African Americans' low rate of vaccination. While this could be due in part to young people becoming eligible only recently, Dr. Thomas Farley, Philadelphia's health commissioner, says he is concerned by the gap in demographic groups.

"Clearly, the center of our target for the future is going to be younger African Americans," he said during a news briefing last week.

These vaccine inequities are reflected across the country, where Black and Latino people consistently receive a smaller share of vaccine doses than they represent in overall population, COVID-19 cases and deaths.

In Florida, for instance, Black people represent 16% of residents but only 8% of those vaccinated. In Illinois, 17% of people who died from COVID-19 were Black, but only 9% of those vaccinated are. In Arizona, 14% of vaccinations have gone to Hispanic people, while they account for more than twice that share of COVID-19 deaths and state population.

While overall vaccination rates in Philadelphia are beginning to slow in the last couple of weeks, providers there — and echoed nationally — say the disparity between racial groups isn't the result of people who are hesitant to get vaccinated. Instead, they say barriers such as the location of vaccination sites, online-only sign-ups, appointment scheduling, transportation and other planning and access issues are to blame.

To address this, Philadelphia is making efforts to set up vaccine clinics in the communities with the lowest vaccination rates — which are also some of the communities of color hit hardest by COVID-19— and to make appointment scheduling more flexible.

Small clinics like Bream's have established relationships with patients in communities of color. Surveys have shown that Black patients turn to health care providers at higher rates for information about the vaccine than other groups, and community health clinics can be important for building trust in the underserved areas they're located in. Those clinics often don't have the staffing capacity to scale up and deliver vaccines en mass, though: In Philadelphia, they only account for 8% of the city's overall doses.

On the other hand, mass sites aren't always accessible to the people who need the vaccine most.

Take the 6,000 dose-a-day vaccine clinic run by the Federal Emergency Management Agency at the Pennsylvania Convention Center. When the site opened in February, sign-ups were all online, which was difficult for elderly residents and those without broadband internet access.

While the downtown location was accessible by public transit, advocacy groups pointed out that it was far away from where many of those in need live. They also noted how it can be difficult for those on tight work schedules to take that much time off to travel and wait in long lines, even for a scheduled appointment.

"We know that Black residents are disproportionate among essential workers," says Sharrelle Barber, a social epidemiologist at Drexel University. "Their flexibility to just not show up to work and get vaccinated is just limited."

Another issue: Latino community leaders cautioned that immigrants may feel uncomfortable going to a clinic where National Guard members in military fatigues greeted them out front.

As a result, in February and March — even after the FEMA site opened and the pace of vaccine distribution picked up — the racial gap widened.

To a degree, Philadelphia health officials did try to avoid this. The city waited two months longer than the rest of the state to open up vaccine eligibility to younger, healthier people. That was supposed to give essential workers and those with chronic conditions, who are disproportionately people of color, more opportunity and less competition to get vaccinated. But Barber says, eligibility is only half the battle.

"You can fall within an eligibility bracket, for example, but still not have the access," she says.

Barber also says the assumption about hesitancy caused significant delays in getting vaccines to Black and Latino communities.

"That then puts the blame on individuals and communities as opposed to actually planning for action and equity," says Barber. In other words, the fallacy that, as Barber describes it,"If Black individuals aren't gonna want to take it, we don't have to actually allocate resources to actually improve access."

As for other measures that would have sped up access to Black and Latino communities, Farley, the city health commissioner, said that logistical complications made it too difficult to allow walk-up appointments during the period when not everyone was eligible for the vaccine.

Since the downtown FEMA center began allowing walk-ins, Farley acknowledges that the share of Black vaccine recipients has increased.

"We're doing everything we can to make vaccines available in what are often predominantly African American zip codes, on a walk-in basis," he said.

But organizations like the Black Doctors COVID-19 Consortium have provided walk-up service for eligible people since January, when it began distributing doses. The grassroots group, led by Dr. Ala Stanford, started offering free, low-barrier COVID testing in Philadelphia's Black neighborhoods and later shifted to vaccines.

"You've got the people who can't register online because they don't have a computer, and don't have access, but those people want to get vaccinated," Stanford says, noting many elderly people fall into this group. "So of course we take them as soon as they show up."

Other efforts by Stanford's group to reach the most vulnerable include setting up its clinics at churches in Black neighborhoods and visiting homebound residents to administer vaccines.

Now, many jurisdictions are changing the way they do things, in an attempt to close the vaccination gap. In New Jersey, people without internet access can sign up for appointments by phone. Some, like D.C., prioritized people by zip code — a strategy that Philadelphia eventually adopted. Maryland launched a mobile education unit and mobile vaccination services in order to reach underserved or remote populations.

City data suggests that location is key to who gets vaccinated. Philadelphia's FEMA clinic borders the city's Chinatown neighborhood. Before it opened, Asians were being vaccinated at the same slow rate as Black and Latino residents.

In the weeks after the FEMA clinic opened, the rate skyrocketed, and Asians now have the highest vaccination rate of all demographic groups in the city. Nearly one-quarter of people vaccinated at the FEMA site have been Asian, while only 7% of residents in the city are Asian.

For its second FEMA site, the city borrowed strategies from Stanford and her consortium. It chose a location in North Philadelphia's Hunting Park, a predominantly Latino neighborhood with one of the lowest vaccination rates in the city.

The site, which can administer up to 2,000 shots a day, is in the parking lot of Esperanza, a Latino advocacy and social service organization and includes a charter school. The site schedules about 700 appointments per day and leaves the rest open for walk-ups.

For Jeremy Ocasio, the site's location was crucial. The 26-year-old works in New Jersey as a forklift operator. He wanted to get vaccinated, but hadn't been able to fit it in with his work schedule. His dad, who lives nearby and had already been vaccinated, was able to pop over to Esperanza to see when it was open, and figure out a time they could come by on one of his son's days off.

"We live around the corner, so he's always coming over here, every single day," Ocasio says of his father.

Other efforts to make the site more accessible include a shuttle that runs all day between the clinic and the nearest subway stop. Signs in multiple languages declare that ICE officials will not conduct enforcement efforts on site. Uniformed National Guard members help administer shots inside the tents, but staff stationed outside wear plainclothes — which is by design, according to Esperanza leadership.

So far, the clinic appears to be reaching its intended demographics. Out of the 9,167 people vaccinated at the site during the first week it was open — the most recent numbers available — 55% were Hispanic. That's roughly the same percentage as the neighborhood as a whole. Just 15% of those vaccinated were white.

Drexel's Barber applauds the move to increase access, but still wonders why it took so long. The disparity was easily predicted, she argues, since these were the same communities that had trouble accessing testing.

"Early on, we could have thought of ways to improve physical access and locations of vaccine sites," Barber says.

She says that the time it's taken to get the Esperanza site up and running has made the communities she talks with as a part of her research feel like an afterthought.

"Instead of front and center," she says, "especially considering the devastation they have experienced during the pandemic."