Hispanics have much higher death rates in certain cancers. A study is trying to change that 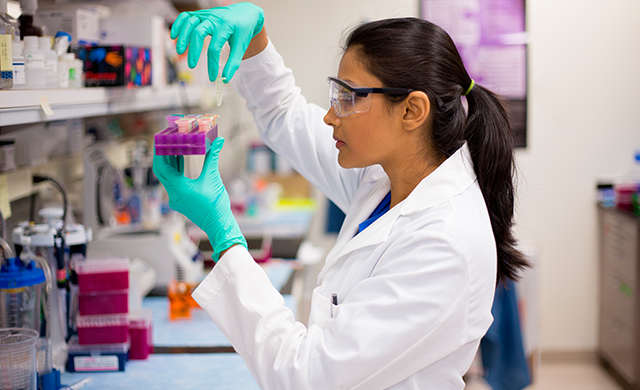 A new $9.8 million, six-year grant from the National Cancer Institute will help investigators at Sylvester Comprehensive Cancer Center at the University of Miami Miller School of Medicine and the Mays Cancer Center at UT Health San Antonio remedy that gap in scientific work and explore why Hispanic cancer survivors sometimes face greater challenges as they strive to recover.

Hispanics, for example, are twice as likely to die from liver cancer as white non-Hispanics and Hispanic women are 2.5 times more likely to die of cervical or stomach cancer.

The NCI study, called “Avanzando Caminos (Leading Pathways): The Hispanic/Latino Cancer Survivorship Study,’’ will look at how social, cultural, behavioral, biological, psychological and psychosocial factors play into Hispanics’ quality of life after their diagnoses and as they adjust to being cancer survivors.

“What happens after Hispanics receive their primary treatment has been a bit more elusive to us,” said Frank Penedo, the study’s lead investigator.

“In this study we’re not looking at one or two factors in Hispanic cancer survivors. We’re looking at multi-factors’’ that could promote better health outcomes, said Penedo, a professor of psychology and medicine and director of the cancer survivorship program at Sylvester.

Penedo said Hispanic survivors are more likely to report lower socioeconomic status and lower educational attainment than their peers. Access to care, lack of health insurance, health literacy and language barriers, which may limit Hispanics’ ability to access complex medical systems, will all be looked at in the survivorship study, he said.

Researchers also hope the study will shed more light on why Hispanic cancer patients are more likely to suffer from fatigue, depression and poorer quality of life, said Penedo.

About 45 percent of all cancer deaths in the United States could potentially be prevented with the adoption of healthier lifestyles, according to the American Cancer Society.

Cultural factors such as why some Hispanic women tend to prioritize their household responsibilities and care of their children over taking care of their own health, resulting in late diagnosis of their cancers, also will be explored, said Penedo.

“Our study will tell us important information we can use to help future Latino cancer survivors heal, recover and reduce the chances of cancer coming back,” said Dr. Amelie G. Ramirez in a statement. She’s the study co-principal investigator at the University of Texas Health Science Center at San Antonio and associate director of cancer outreach and engagement at Mays Cancer Center.

What also sets this study apart, Penedo said, is its scope. Previous Hispanic survivorship research that he and others have done has involved small samples of 100 to 200 people.

But this study will recruit 3,000 Hispanic cancer survivors in geographically and demographically distinct areas. Sylvester will draw participants from an area of 6 million people that is 44 percent Hispanic with those of Cuban descent comprising the largest group.

In the Mays Center’s region, 69 percent of the 4.9 million residents are Latino with Mexican Americans the predominant group. Nearly half of area residents speak Spanish as their primary language.

Both the Florida and Texas populations have similar stress factors, such as worry about immigration status and lower levels of education that may affect patients, but because the two areas are demographically and culturally unique and have different genetic admixtures, it’s possible “there may be differences in the findings” from South Florida and Texas, said Penedo.

“Part of the challenge is that a lot of the research funded in the past involved relatively small samples of patients in specific communities,” he said. “What’s a big deal is that this is the first study involving large numbers of people in the context of survivorship.”

“We didn’t want this to be an all Cuban and Mexican study,” said Penedo. To more closely approximate the distribution of various Hispanic groups within the U.S. population, 50 percent of participants will be Mexican Americans and 50 percent will be drawn from other Hispanic groups.

Within the other 50 percent sample, 45 percent of those recruited will be of Central and South American descent, 35 percent Cuban American and 20 percent Puerto Rican.

About 75 percent of the participants will be from urban communities and 25 percent will come from rural areas.

Participants will be followed over a period of three years and join the six-year study at staggered times, said Penedo.

During this phase of the study, he said, researchers will only be studying survivors of solid cancer tumors and will be focusing on patients with stomach, colorectal, liver, lung, breast, cervix, kidney and prostate cancers.

Such cancers are among the most prevalent among Hispanics and there are disparities between their frequency in Hispanics and non-Hispanics, said Penedo.

If researchers can get additional funding, they hope to follow the cancer survivors five to 10 years after their treatment and to expand the study to include other forms of cancer in Hispanics, said Penedo.

The new study will build on cancer research that both Penedo and Ramirez did as part of the NCI-funded Redes en Acción (Networks in Action), a national Latino cancer network created by Ramirez.

Redes documented the impact of patient navigation — having someone assist patients from their diagnosis through treatment. “It’s about getting patients to the right points of care in a timely manner,” said Penedo who has worked with Redes for the past 10 years.

The network also has promoted workforce training to increase the number of scientists with experience working with the Hispanic community and ran a cancer awareness and information campaign for Hispanics.

“Redes laid the foundation for a lot of the work we’re going to be doing in the study now,” said Penedo.

The Avanzando Caminos study comes at a time when a 142 percent increase in cancer cases among Hispanics is expected by 2030.

That’s partly a reflection of the growth in the Hispanic population, which is the largest minority group in the United States, and the aging of a population that has historically been younger, Penedo said.

LEADING CAUSES OF DEATH OF HISPANICS, 2017*

* Persons of Hispanic origins may be of any race