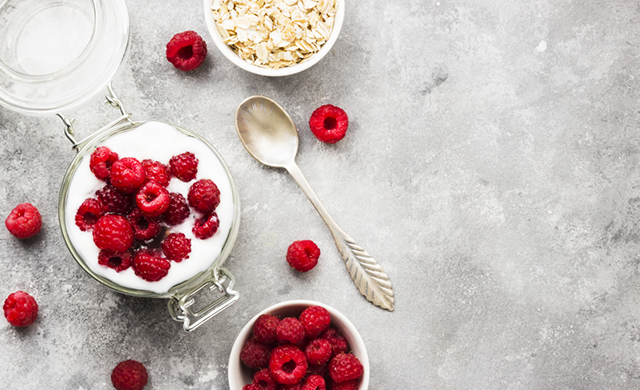 Mix up your morning meal and try one—or a few—of these 5 healthy breakfast foods that help you lose weight.

Eating a morning meal is a healthy habit if you're watching your weight. Research shows that regular breakfast eaters tend to be leaner and dieters are more successful at losing weight—and keeping it off—when they eat breakfast. What's more, people who do typically get more of some important nutrients, like fiber and vitamins.

A cup of raspberries delivers a whopping 8 grams of fiber (that's more than double what's in a cup of strawberries and about the same amount in a cup of some types of beans). What's so great about all that fiber? Recent research in the Journal of Nutritionsuggests eating more fiber as a way to prevent weight gain or even encourage weight loss. Over the course of the two-year study, the researchers found that boosting fiber by 8 grams for every 1,000 calories resulted in about 4 ½ pounds of weight lost.

Oatmeal can help you lose weight in two ways. First, it's packed with fiber and it keeps you feeling fuller longer. Second, a recent study in the reported that eating a breakfast made with "slow-release" carbohydrates—such as oatmeal or bran cereal—3 hours before you exercise may help you burn more fat. How? Eating "slow-release" carbohydrates doesn't spike blood sugar as high as eating refined carbohydrates (think: white toast). In turn, insulin levels don't spike as high. Because insulin plays a role in signaling your body to store fat, having lower blood sugar levels may help you burn fat.

A recent report, published in the New England Journal of Medicine, and out of Harvard revealed which foods are correlated with weight change, including the top 5 foods that promote weight loss. Yogurt was one of them! Another reason to eat yogurt: the protein in it may give you an extra edge if you're looking to get leaner. When researchers fed two groups of mice a high-fat diet for 11 weeks, the mice that got water spiked with whey protein (a type of protein found naturally in yogurt and other dairy) packed on 42 percent less weight and nearly a third less body fat than the mice who just drank plain water, despite the fact that they ate roughly the same number of calories. The whey eaters also gained 7 percent more lean body mass (e.g., muscle mass). Save calories—and unnecessary sugar—by choosing plain yogurt. If you need a little extra sweetness, try fresh fruit (maybe raspberries?).

Nuts were also among the top 5 foods that Harvard researchers said promote weight loss. I love to slather a tablespoon or two of peanut butter onto whole-wheat toast (ahem, a "slow-release" carbohydrate), but you could also add nuts to your oatmeal (another "slow-release" carb).

Eggs deliver protein, which is great for dieters. Compared to carbohydrates and fat, protein keeps you satisfied longer. Plus, in one study, dieters who ate eggs for breakfast felt fuller longer and lost more than twice as much weight as those who got the same amount of calories from a bagel for breakfast.

Which Drinks Can Help Lower Or Control Cholesterol Levels?