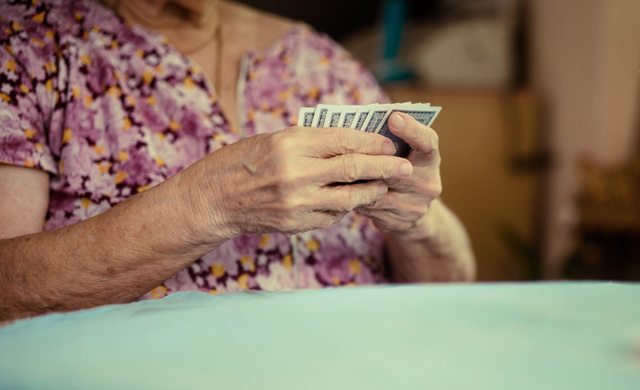 Older Black Americans are about twice as likely to have Alzheimer's or another form of dementia as older white people, and older Hispanics are about 1.5 times as likely, the report revealed.

But more than one-third of Black people (36%) and nearly one-fifth of Hispanics (18%) and Asians (19%) believe discrimination would be a barrier to receiving good care for Alzheimer's, surveys conducted by the association show.

"If you don't trust your health care provider, you're not going to go to that provider to ask questions," said Maria Carrillo, chief science officer for the Alzheimer's Association. "And, in fact, Hispanic, Black and Native Americans are twice as likely to say they wouldn't even see a doctor if they were experiencing concerns."

The report found that U.S. racial and ethnic minority communities expect and experience more barriers when accessing dementia care, have less trust in medical research, and are less confident that doctors understand their ethnic and racial background and experiences.

"This is all a very cyclical issue that needs to be addressed, and we need to bridge these barriers for dementia care because the older diverse population is growing exponentially," said Carrillo, herself of Mexican-American heritage. "By mid-century, 40% of the older population will be non-white Americans, so we have to increase our efforts to make sure that the next generation of health care providers are ready to work with people like my parents."

Half of Black Americans report they have experienced health care discrimination, along with two out of five Native Americans and one-third of Asian Americans and Hispanic Americans, the survey shows.

It's not just the patients themselves reporting problems. About half of non-white caregivers dealt with discrimination trying to advocate for their care recipient, with the top concern being that providers or staff do not listen to what they say because of their race, color or ethnicity.

This concern was especially high among Black caregivers (42%), followed by Native American (31%), Asian American (30%) and Hispanic (28%) caregivers. However, only 17% of white caregivers expressed this view, the findings showed.

Dr. Roy Hamilton, of Penn Medicine in Philadelphia, said, "It's important to note that is not an inaccurate perception, not only with respect to Alzheimer's disease but across a wide spectrum of neurologic disorders and medical disorders more broadly." Hamilton is director of the Laboratory for Cognition and Neural Stimulation and assistant dean of diversity and inclusion.

There's solid research evidence that people from racial or ethnic minority groups tend to receive worse medical care than white people, and have to work harder to access even that lower level of care, Hamilton said.

"This feeds into or contributes to a complicated cycle of problems where individuals from historically marginalized groups are both more suspicious and more wary of pursuing care," he added. "And when they do, oftentimes those suspicions are borne out."

Overall, fewer than half of Black Americans and Native Americans feel confident that they have access to culturally competent health care providers. Only about three in five Asians and Hispanics express similar confidence.

Carrillo pointed out that "people of color are saying that they would want health care providers who can understand their unique experiences and background, and our report shows they would doubt that they will actually have access to culturally competent providers."

She added, "If you're going to make recommendations about their environment, it's important to recognize what that looks like. People from different backgrounds might be living in multigenerational households more than others. They might need information in different languages to take back home. They might need information around nutritional recommendations that are culturally appropriate."

This communication gap has led to a lack of information about how Alzheimer's and dementia might affect health as people grow older, the report noted.

Concern about developing Alzheimer's is much lower among Native Americans (25%), Blacks (35%) and Hispanics (41%) than among whites (48%), the findings showed.

This might be motivated by a certain sense of fatalism when it comes to aging and brain health.

More than half of non-white Americans believe that a significant loss of memory or brain function is a normal part of aging, the report said. Further, more than one-third of Native Americans and nearly three in 10 Hispanics do not believe they will live long enough to develop Alzheimer's or another dementia.

Hispanic, Black and Native Americans are twice as likely as white Americans to say they would not see a doctor if they noticed problems with their thinking or memory, and about 20% of Black and Hispanic people said they would feel insulted if a doctor suggested screening to test their brain function.

Hamilton suggested that the entire field of dementia research needs to undergo a conceptual change, based on the simple fact that brain diseases are more likely to affect communities of color.

"If you were to close your eyes and imagine the most typical Alzheimer's disease patient in this country, just by the level of risk, that person ought to be a person of color, but that's not how the field has imagined itself since its inception," Hamilton said.

Carrillo said that medical schools need to do a better job teaching cultural competency to health care professionals so they can properly care for people from diverse backgrounds.

That effort, Hamilton added, would be further enhanced by attracting people from communities of color to join the medical workforce.

The Alzheimer's Association has more about race, ethnicity and Alzheimer's.