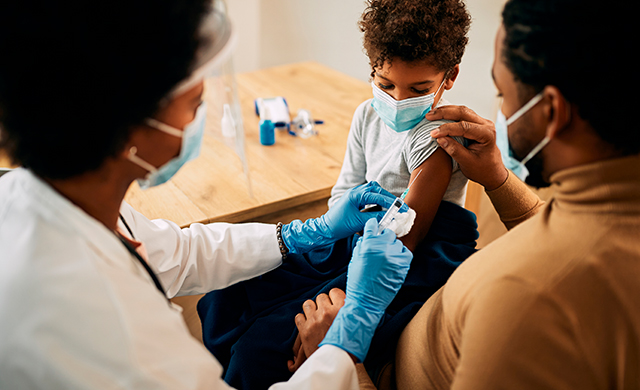 The data, provided by the Centers for Disease Control and Prevention in response to a public records request, gives a sweeping national look at the race and ethnicity of vaccinated people on a state-by-state basis. Yet nearly half of those vaccination records are missing race or ethnicity information.

KHN’s analysis shows that only 22% of Black Americans have gotten a shot, and Black people’s vaccination rates still trail those of white people in almost every state.

While 45% of Native Americans have received at least one dose, stark differences exist depending on where they live. And Asian people’s vaccination rates are high in most states, with 41% getting a shot.

The analysis underscores how vaccine disparities have improved as availability has opened up and Biden administration officials have attempted to prioritize equitable distribution. Still, gaps persist even as minority groups have suffered much higher mortality rates from the pandemic than whites and are at risk of infection as states move to reopen and lift mask mandates.

“Every day we do not reach a person or a community is a day in which there is a preventable COVID case that happens and a preventable COVID death in these communities,” said Dr. Kirsten Bibbins-Domingo, chair of the department of epidemiology and biostatistics at the University of California-San Francisco.

KHN requested race and ethnicity data from the CDC on people who have received at least one dose of a COVID vaccine since mid-December for all 50 states, the District of Columbia and Puerto Rico. The data covers shots as of May 14 given to 155 million people that were administered through federally run programs and federal agencies as well as by state and local authorities.

Eight states—Alabama, California, Michigan, Minnesota, South Dakota, Texas, Vermont, and Wyoming—either refuse to provide race and ethnicity details to the CDC or are missing that information for more than 60% of people vaccinated. Those states are excluded from the KHN analysis, though the CDC includes all but Texas in its published national rates.

The data for Native Hawaiians and other Pacific Islanders is unreliable, making it difficult to draw conclusions on the vaccination rate in that population.

Benjamin pointed to the early challenges in securing an appointment online and the initial placement of vaccination sites—which he noted the Biden administration had worked to improve.

“We’re going to be judged whether or not we did it equitably at the end of the day,” Benjamin told KHN. “Right now, I still think we’re failing.”

Dr. Utibe Essien, a health equity researcher and assistant professor of medicine at the University of Pittsburgh, stressed that targeted outreach must involve multiple institutions in a community.

“It’s not just the Black doctor, it’s not just the barber, it’s not just the pastor, kind of these traditional folks who have been the big messengers. We have to be broad,” he told KHN. “It’s investing in folks who know the neighborhood, the small-store owner who gets to see all the 12- to 15-year-old kids come through the store getting snacks before they head off to school.”

Why Native Americans lead in vaccinations

Nationally, Native Americans and Alaska Natives have been vaccinated at significantly higher rates than other groups. Tribes administered doses quickly, prioritizing elders with culturally important knowledge, said Meredith Raimondi, director of congressional relations and public policy for the National Council of Urban Indian Health. The rollout was imbued with urgency: Native Americans have died of COVID at more than double the rate of white Americans, according to the latest CDC data.

“It became an issue of, ‘Well, we could get you the vaccine, but we don’t know who is going to administer them,’” Raimondi told KHN.

The council and Native American Lifelines, a nonprofit providing health services, partnered with the University of Maryland-Baltimore for a vaccination site exclusively for Native Americans living in Maryland, Virginia, and Washington, D.C. It launched in April.

While the vaccination rates for Native Americans surpass those of white people in some states due in part to IHS, that infrastructure does not exist for Black Americans, said Rhonda BeLue, the department chair of health management policy at Saint Louis University.

At the beginning of the pandemic, people were shocked by how much more likely Black Americans were to die from COVID, she told KHN.

Connecting with every community cannot be an afterthought, said Diego Abente, president and CEO of St. Louis’ Casa de Salud, a health care provider focused on immigrant communities. Community buy-in, effective social media use and language programming from the start have been essential, he said. Hispanic residents have a higher vaccination rate than white residents in Missouri.

But nationally, a dearth of transportation options, an inability to take off from work to get a vaccine, and concerns about documentation and privacy have dampened uptake among Hispanic people, according to experts.

“To me it’s more about access to health care,” Berry told KHN. “If you don’t live close to health care, you’re just going to shrug it off immediately. ‘I can’t get that vaccination. I’m going to miss work.’”

To reduce fear among Idaho agricultural workers that may be part of mixed-immigration status families, public health workers emphasized messaging that documentation wouldn’t be required, said Monica Schoch-Spana, a senior scholar at Johns Hopkins Center for Health Security. She has helped lead its CommuniVax project seeking to boost uptake among Black, Hispanic, and Indigenous communities.

It’s also important to engage trusted institutions to administer vaccines, Schoch-Spana said: “Is it a familiar place, does it feel safe, and is it easy to get to?”

Federal efforts have placed sites in underserved neighborhoods. About 60% of shots at the Federal Emergency Management Agency’s vaccination sites and at community health centers were given to people of color, federal health officials said this week.

Race or ethnicity information is still missing for nearly 69 million vaccinated people—or 44%—in the CDC data, despite vows by federal officials to improve outdated systems to better inform their response.

CDC spokesperson Kate Fowlie said their efforts, including sharing strategies for capturing demographic data and reducing data gaps with state and local governments, have resulted in improvements in data collection. Officials are also planning to allow agencies to update previously submitted vaccine records. The true national rates by race or ethnicity group would each be higher with complete data.

Unlike the federal government, North Carolina made it nearly impossible for providers to submit vaccine data without recording race and ethnicity. As a result, it has the most complete demographic data of any state.

Adding that step was not an easy sell—providers and other vaccinators were initially resistant, said Kody Kinsley, the chief deputy secretary for health at the North Carolina health department. But it has paid off in the state’s ability to target its response to populations getting left behind, he said.

Bibbins-Domingo said the federal government and states need to make collecting this vaccination data by race mandatory, because data drives the response to the pandemic.

“The feds know how to do this. They do it every 10 years for the census,” she told KHN. “That we somehow cannot figure it out in public health data is quite simply unacceptable.”

Visit the Github repository to read more about and download the data.