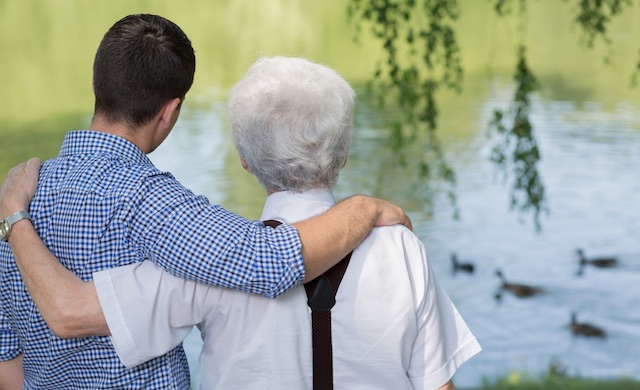 My father was a huge influence on my life and career, with many lessons and pearls of wisdom to share throughout his long and rich life. But what I didn’t expect, is that when the tables were turned, and I was thrust into the caregiver role of an aging parent, that he would still be the one teaching me lessons – about life and vulnerability, courage and strength, dignity and death. Nor could I have known about the multidimensional aspects of caregiving – and the magnitude of the responsibility – because nothing can prepare you more than actually being in that situation yourself.

Fortunately my father was always looking far ahead and prepared me early on for the inevitable, well before circumstances forced all of our hands. I remember one instance in particular, when my dad turned 70 (a good 15 years before he would start to show any real signs of declining health). We were alone together in the backyard and he asked me to do one thing for him, and one thing only: “Son, take care of your mother, because I don’t know how much longer I’m going to be around.”

Even then, my father had a feeling that he was living on borrowed time. Perhaps he was already seeing early signs of the problems to come. Or maybe he was just starting to feel the nearly twenty-year age difference between himself and my mother.

Whatever it was, it made him – and us by extension – very much aware of the importance of preventive care. He always made sure we were getting enough exercise, eating right and taking our vitamins – and not putting off any health issues. “If there’s a problem, go get it checked out,” he would say. “There’s a reason you have insurance.”

It was around the age of 85 that we first started to notice some major changes in his behavior. His vision was becoming more impaired and there were other signs that his body was becoming weaker, too. It became my responsibility to take him to his doctor appointments, and I highly recommend choosing an advocate for your own loved one if you find yourself in a similar situation – someone who can speak up for them, help them understand what’s going on, and always ask ‘why’ over blindly following doctor’s orders.

Being an advocate for your loved one is critical, because what I also learned from this experience is that it’s the physician’s job to be prescriptive – but they cannot be predictive. They can only help you anticipate what the future might hold, not predict what it will be. This is especially true with Alzheimer’s, which was my father’s ultimate diagnosis.

Another lesson learned is to hold onto hope – but don’t let it cloud your judgment. I went into the role of caregiver with a healthy dose of skepticism. For instance, when the doctor suggested we try a new drug, I pushed back because I didn’t want my dad’s treatment plan based upon a clinical trial.

But then, later on down the road, wanting to do more to help my father as his health declined, we were swayed by an article about just that, a new drug for treating the symptoms of dementia in Alzheimer’s. Putting hope before due diligence, we demanded that my dad be put on this new medication. Unfortunately, it was a course of action that backfired, and may have even accelerated my father’s condition.

As a caregiver, part of your responsibility is to stay strong and not give into desperate moves or wishful thinking – hoping against hope that there’s a cure despite what all the research and best doctors say. As we came to understand that we weren’t the experts in this disease, we started reaching out to those who were (Alzheimer’s Association, and many others).

The moment you realize there are resources out there offering help and support, you start to take comfort in that; and the moment you start reaching out to them, you become really smart about caring for your loved one. Because that’s the moment you have the courage to be vulnerable, to admit you don’t know everything and need help – and that’s nothing to be ashamed or afraid of. Nor is exposing your family’s hardship to the outside world, because this is about something much more than that.

It’s about educating yourself, through the resources that are out there, so that you can start making the right decisions – day after day – especially when a loved one needs you to make the decisions for them. As a parent in particular gets older, we start waking up in the morning thinking, is today the day? Is today the day their health takes a turn for the worse and we need to step into the role of caregiver?  Because if so, who is going to have their back – and their bests interests at heart – more than us?

After FDA Warning About Grain-free Pet Food, What's Safe to Feed Our Pets?

Learning How To Support Loved Ones With A Personality Disorder