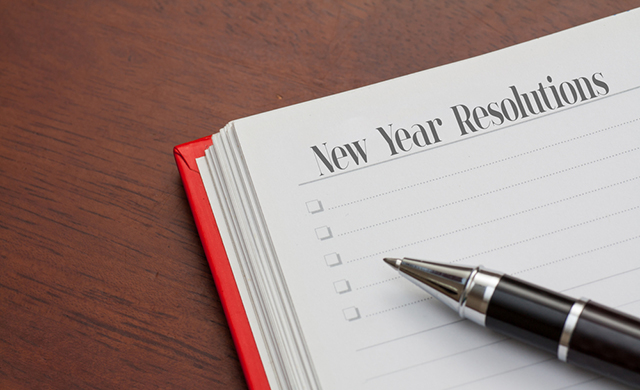 However, don’t let these numbers discourage you. With a couple of tips and tricks, accomplishing your goals of the New Year can be simple.

When you begin making your list of resolutions, one of the most important things is to be realistic. There’s no reason to draft a list of things you won’t accomplish. Instead, one rule of thumb is to choose just one realistic resolution. That way you’ll be more focused and more likely to achieve it. The American Psychological Association says that focusing on just one behavior at a time is more likely to lead to long-term success.

2. Understand the reason behind your goal.

If you are only pursuing a goal because of societal or professional pressures, then it might be time to reassess your resolution. If you don’t know why exactly you want to achieve something, the drive and passion required to help you reach it won’t be there. And without that drive, you can forget about accomplishing anything. Business coach Heidi Stevens says, “Get clear on what you most desire and want from this year. It’s vital that this comes from you, not what you should do, or what someone else wants from you… If you want to make $250,000 this year, why? It’s never about the money, it’s about what the experiences, lifestyle, or feeling that the money buys you.”

Once 2019 picks up and you begin taking the steps towards reaching that New Year’s resolution, it’s important to track your progress along the way. By writing down your status every time, you’re getting a holistic idea of whether you’re making progress or not. And a log book can be a great tool for this. Andrea Busby, associate director of UChicago Medicine’s Chicago Weight Program, explains: “Whatever component of your health is more important to you, start keeping a record of it. You can’t make any changes to a health behavior until you know exactly what the baseline is.”

4. Make a plan and make it visual.

After you’ve set your resolution, make an action plan for achieving it. The plan should not only include the steps you need to take towards reaching it but also why you are pursuing it in the first place. Once you have that sorted out, write it out and put it somewhere you’ll see it everyday.

“Once you have determined what your goal will be, make a plan and post your plan in plain sight,” says psychologist and University of Illinois, Springfield professor Karla Ivankovich. “Maybe you hang it on your mirror, maybe your refrigerator—but the visual reminder should include your goal, why you chose it, and a reminder of why quitting on yourself is not an option.”

By sharing your New Year’s resolutions with someone, you’ll have someone to help motivate you and hold you accountable. In fact, the more people who know about your resolution, the more likely you will be to stick with it. “Support is so important in every area of your life, but especially when you’re trying to make changes. If there’s a support group out there for whatever your resolution is, then use it because you won’t regret it. The more support you have, the better,” says healthcare professional Emily Newberry.

6. Arrange your environment for success.

When it comes to New Year’s resolutions, it’s not only important to develop a positive support group of people but also arrange your physical environment up for success. That means having the right equipment, setting the right ambience, and ultimately, putting yourself in the right mindset.

Charles Duhigg, author of The Power of Habit, uses exercising as an example—by simply putting on your workout clothes, you’re one step closer towards achievement. “Oftentimes when people have never exercised before, and researchers are working with them to get them to exercise, the first week is: You should just put on your running clothes. Don’t even leave the house,” he explains to the New York Times. You want to create an environment where you’re making very slow progress that is guaranteed to deliver victories to you.”

You are your harshest critic and it can be easy to put yourself down when taking on a challenge. However, rather than critiquing your every move, try taking the opposite approach. Motivating and positive self-talk will actually inspire and push you to achieve your goals.

According to personal development coach Corie Chu, “Positive self-talk is crucial. Sometimes, our inner critic gets in the way of our success, creating limiting beliefs that most of us aren’t even aware hold us back. Phrases like ‘I can’t’, ‘I shouldn’t’ and ‘There’s no way’ drive us away from what we desire… Taking a deep, realistic look at yourself and doing some self-exploratory work can help you address these self-limiting beliefs, and inspire you to set a conscious intention for what you want to achieve and motivate you to create powerful affirmations to help you move forward. Improving your inner voice is crucial in this regard; you have to be your own personal cheerleader.”

Change doesn’t happen overnight. In order to make progress towards your goals, it’s important to take small steps every day rather than large leaps every month.

For Hansa Bhargava, medical editor and expert pediatrician at WebMD, “Scheduling small steps toward goals is a key to success. For example, I have set the goal of having dessert only 2 times per week (down from 4 times!) and going to yoga twice per week. For yoga, I will look at my calendar at the beginning of the week and see where I can fit it in. Even though sometimes this is challenging as a working mom, I will try my hardest to get it done. The hope is that after several weeks, it will become a good habit.”

9. Forgive yourself for slipping up.

Being consistent and persistent with your goals is key to their success. However, that can be easier said than done and once in a while you might find yourself slip up. When that happens, it’s important not to let your efforts and your resolution go altogether. Instead, cultivate the mindset that it’s OK to slip up every once in a while—you’re human. Don’t let slip-ups deter you from your goals.

“Having a lapse is common. In fact, 75 percent of resolution makers slip up within the first two months,” says John Norcross, professor of psychology at the University of Scranton. “One setback shouldn’t undo all your efforts. Instead of stewing, figure out how to prevent it from happening again.”

While this one might come as a shock, there’s no real reason you have to start pursuing your goal on January 1st. In fact, it’s best if you don’t. Very often, people feel pressure to choose a last-minute goal just because the New Year is approaching, and this can lead to short-lasting goals and a lack of commitment towards creating positive change.

According to an article published in Inc., “Change is hard and you have to be ready to do the work. Be willing to delay your new goals until you’re prepared to take action. Instead of forcing yourself to commit to a goal in January, create a successful plan for change in a few weeks-or even a few months-down the road.”

Summer in the Age of COVID-19: What Activities Are Safe?

Parents Need to Have Honest Conversations With Kids About Race and Racism, Starting Very Early

A Bright Side to Sheltering in Place With Your Family