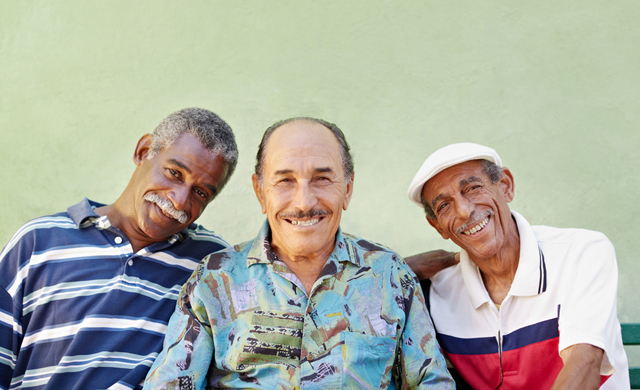 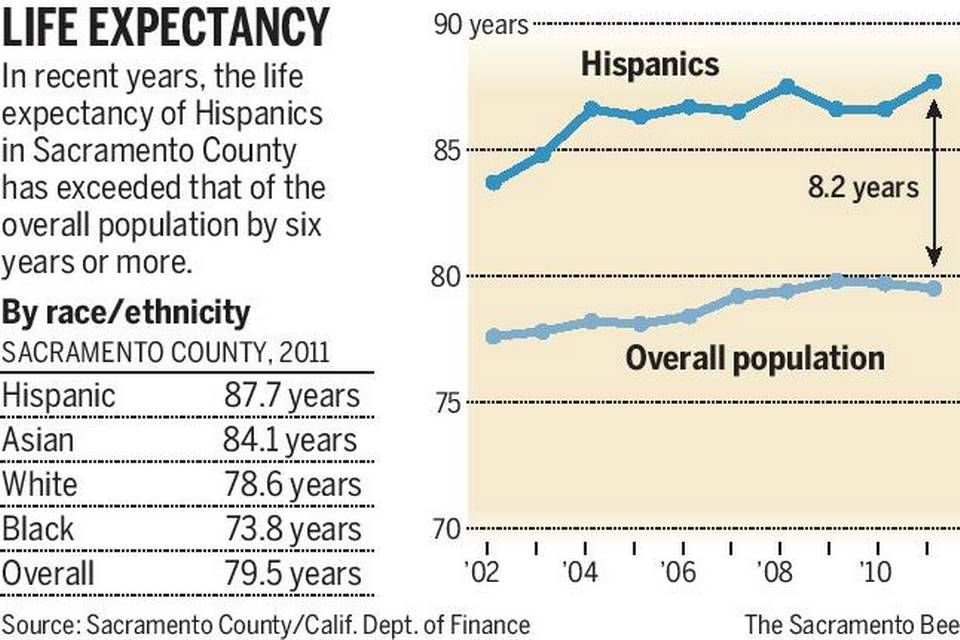 Maria Watts remembers digging as a child through her family fridge for tamales before school each day. The traditional Mexican fare, left over from one of her family’s nightly sit-down dinners, made for an excellent breakfast hand-prepared by her immigrant mother.

Home-cooked meals, neighborhood soccer games and religious traditions are thought to be crucial to “the Hispanic Paradox,” a term researchers have applied to the fact that Latinos continue to enjoy the longest life expectancy despite being some of California’s most impoverished and least insured residents.

The life expectancy for Sacramento’s Hispanic population towers at 87.7 years, eight years beyond the average for all county residents, according to the 2014 Sacramento County Health Status Report. That is 3.6 years beyond the next ethnic group, Asian Americans, and nine years beyond Caucasians.

But an emerging body of research suggests that as Mexican immigration slows and generations of Latinos assimilate, the life span advantage will fade. Initiatives are underway in the Central Valley and beyond to figure out how to preserve it.

Dr. David Hayes-Bautista, director of UCLA’s Center for the Study of Latino Health and Culture, estimates that if everyone in the U.S. had the same epidemiological profiles as Latinos for the top three causes of death – heart, cancer and stroke – over 300,000 lives would be saved every year.

“Here’s a health gift to the people of the United States of America, and we’re ignoring it, and we will all pay the price,” he said. “Because if we can figure out what that mechanism is, it could be shared with our non-Latino neighbors. That should be the No. 1 thing to do on every school of medicine’s list.”

In their native country, many working-class immigrants are in peak physical form from constant fieldwork, chores and foot travel that are part of everyday life, said Xavier Morales of the Latino Coalition for a Healthy California. They eat a basic diet of rice, beans, meat and fresh produce.

The influx of healthy Mexican immigrants over the last several decades has been a positive contribution to Latino health in the U.S., Morales said. As the Mexican-born population here climbed from fewer than 1 million in 1970 to a peak of 12.5 million in 2007, the community grew in size and outlived its white neighbors.

Households with first-generation or even second-generation parents often benefit from a sense of comfort around cultural identity and family cohesion, said Dr. Sergio Aguilar-Gaxiola of the UC Davis Center for Reducing Health Disparities. Speaking Spanish at home, for example, has been shown to improve mental health, he said, based on his own research.

“In Mexican families, having an identity from childhood and feeling proud of that identity is considered a value,” he said. “Acculturation is abandoning the identity, abandoning the language, feeling embarrassed by that. That seems to lead to negative health outcomes.”

Mexico also has a low divorce rate – only 9 percent vs. about 50 percent in the U.S. – and immigrant couples rarely separate, even after crossing the border. As a result, Mexican households have a tight-knit family structure that has historically lowered rates of anxiety and depression, Aguilar-Gaxiola said.

That was the case in Watts’ childhood home in Sacramento, where every Sunday meant a trip to a relative’s house for traditional Mexican fare and playtime for the kids. When she moved her own family to Redding for her husband’s job, the large gatherings became less frequent, but the supported feeling remained intact. All of her family’s elders have lived into their 80s, she said.

“Family is there no matter what – it’s ingrained, don’t have to think about it,” she said. “There might be something about that sense of security that keeps the stress at bay.”

The immigrant effect has also kept the rates of smoking and alcohol abuse, which are relatively low in Mexico, down for the U.S. Latino population. Only 11 percent of Mexican-born Americans smoke cigarettes, according to the American Lung Association. The number jumps to 18 percent for U.S.-born Mexican American men, but is still less than the 25 percent of white men who smoke.

The foreign-born population has declined as the arrival of new immigrants has slowed, according to a report from the Pew Research Center. Today, only 35 percent of Latinos were born outside the U.S., compared with 55 percent in 2007.

Health advocates fear that as immigration from Mexico slows and new generations adopt a culture of fast food and video games, Latinos will die earlier on average.

“The large rates of immigrants coming with the protective factors, that’s artificially keeping up our life expectancy,” Morales said. “If that immigration starts to slow down, if we don’t change things and we keep on with more consumption of fast food and sugar sweet beverages, the average life expectancy will likely be going down.”

Half of Latino adults eat fewer than the recommended servings of fruits and vegetables per day, and 67 percent report eating fast food at least once per week, according to the California Department of Public Health’s latest report. Sixty-nine percent of Latino adults are currently overweight or obese.

The consumption of unhealthy foods in the Latino community is tied to a cultural misconception about success, Morales suggested. Being able to purchase bread instead of tortillas, or eat at a fast-food restaurant, is seen as an achievement, he said.

Morales helped pass a soda tax in Berkeley and has lobbied against sugar-sweetened beverages at the state Capitol. The affordability of these drinks, combined with aggressive marketing and the use of Latino icons in advertisements, has had a negative impact on the community in recent years, he said.

“You have teenagers who have diabetes,” he said. “We’ve never seen anything like this in public health.”

Genoveva Islas, of Tulare, has witnessed firsthand the shortening of lifespans with every generation of her family. Her grandfather, who spent most of his life in Mexico, lived to be over 100 years old. Her father, who came to the U.S. with her mother as a teenager, died of a heart attack at age 53 while working on a farm in the Central Valley.

“He acculturated when he was young and it influenced their diet,” Islas said. “My maternal grandmother grew the corn that she ground to make into tortillas. My mother purchased flour tortillas. I couldn’t make a tortilla if my life depended on it.”

While the cheese, beans, sour cream and guacamole often used in Mexican cooking might not seem the most nutritious choices, community health advocates say it’s still a better bet than fast food. The Health Education Council, a regional nonprofit that runs shopping and cooking classes for Latino adults and fitness programs for kids, is just one of a number of local organizations trying to educate the community about healthy habits.

“Our families are still in need of health education and health management, that’s the No. 1 way to address prevention of chronic diseases,” said Cynthia Lopez-Foltz, program administrator with the council. “We’re trying to bridge that gap.”

Islas’ parents, like many of California’s Latino families, had inadequate health coverage, she said. Her father’s heart issues may have been detected had he had access to more preventative care, but by the time he went into cardiac arrest on his work farm, more than an hour from the nearest hospital, it was too late.

“Creating an environment that would have allowed (my father) to practice a healthy diet and be physically active is so important.”