Blogs, news, and conversations about the Latino community. 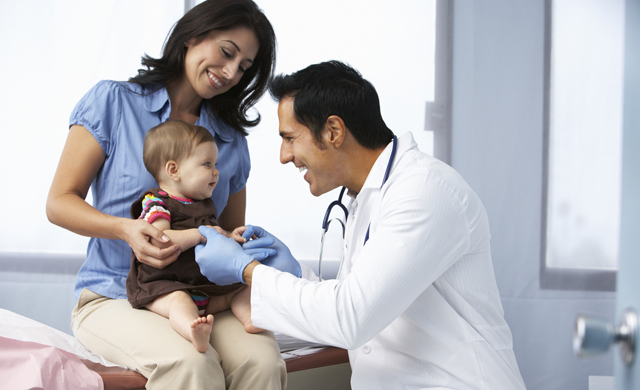 On any given day at the Salud Clinic, Lucrecia Maas might see 22 patients. They come to the community health center tucked away in an office park here needing cavities filled, prescriptions renewed and babies vaccinated. When they start to speak, it’s rarely in English. Sometimes it’s Hindi. Or Dari. Or Hmong. Or Russian.

Maas is fluent in English and Spanish, but that gets her only so far. She often has to hop on the phone with a medical interpreter, who relays her questions to the patient and then translates the patient’s answers. “It just takes a little more time,” the nurse practitioner said.

The future of American health care looks a lot more like the Salud clinic than Norman Rockwell’s iconic small-town doctor’s office. The country is on course to lose its white majority around 2050.

That future is already visible in Sacramento County and neighboring Yolo County, where West Sacramento is located: by 2013 the combined population of Hispanic, black, Asian and other nonwhite residents had edged out whites. In West Sacramento, a historically working-class county across the river from the state capital, more than 2 out of 5 public schoolchildren already speak a language other than English at home.

Sacramento-area hospitals, community health centers and doctor’s offices have had to adapt. They’ve hired more multilingual, bicultural staff. They’ve contracted with interpretation services. The medical school at the University of California, Davis, is trying to figure out how to recruit more Latino students to a profession that remains largely white and Asian. And doctors are being trained to deliver culturally appropriate care to patients of many backgrounds.

When a diabetic pregnant Afghan woman wanted to fast during Ramadan, the Salud Clinic’s nutritionist recalculated the best time of day to measure her blood sugar. If Mexican mothers say they’re rubbing gentian violet on their baby’s umbilical cord area to keep it clean — a harmless natural remedy — doctors encourage them to keep doing so.

Similar stories are playing out across California, which became majority minority in 2000, and the United States. Health systems are using new data tools to get a better handle on just who they’re serving — and where the trend lines are pointing.

Insurance doesn’t always pay for the extra costs of services like translation. Patient visits take extra time, straining schedules for doctors and nurses. “You can’t really help somebody if you don’t understand how they value health, and how they understand health and the health care system,” says Robin Affrime, CEO of CommuniCare Health Centers, the nonprofit that operates the Salud Clinic.

Most of the nation’s population growth since the 1960s has come from the immigration of nearly 59 million people from foreign countries who settled in the U.S. in that time, mostly from Latin America and Asia, according to the Pew Research Center.

Hispanic, black, Asian and multiracial babies in the United States already outnumber white babies. In three years’ time, a majority of U.S. children and teenagers will be some race other than non-Hispanic white. And in about 30 years, whites will cease to be the national majority, demographers say.

A more diverse patient population may mean a different mix of health conditions, because some are linked to country of origin. People who were born in Asia are particularly prone to hepatitis B, for instance. African-Americans are more likely to have sickle cell anemia, an inherited blood disorder more common in Africa, the Middle East, India, and parts of southern Europe and Latin America.

Asians and Hispanics — the groups likely to drive population increase going forward — have longer life expectancies than whites. Hispanics are less likely to suffer from many chronic conditions than whites even though they’re typically poorer and less educated.

Yet second- and third-generation Hispanic-Americans are often less healthy than their immigrant parents. One theory is that with assimilation, younger generations pick up bad American habits such as eating fast food and not getting enough exercise.

One of the challenges facing health care providers is obvious: many new immigrants can’t speak English. About 60 million Americans speak a language other than English at home and about 25 million can’t speak English very well, according to the U.S. Census Bureau.

Salud doesn’t typically bring in in-person interpreters, because they’re more expensive. But it does contract with a phone interpretation service, a business that’s growing rapidly across the county. The service provides real-time translation between English and at least 12 other languages. Interpretation of some of the less common languages, like Hmong, needs to be scheduled in advance. And there have been instances in which the interpreter speaks the wrong dialect of a language like Dari, spoken in several countries in Central Asia.

Often a staff member can help. The health center has doctors and nurses who speak Hindi, Urdu, Punjabi, Tagalog and Spanish, and has hired administrative staff and medical assistants who speak Hmong and Mien, a language spoken by some Indochinese refugees who fled to the United States during the Vietnam War.

But Mien has no written language. And some cultures and languages have concepts that defy easy translation. “There are some words where we really cannot use the translator,” said Rubina Saini, a Salud physician who speaks several South Asian languages.

Other clinics don’t do as well as Salud. Under federal civil rights law, hospitals, nursing homes and other providers that receive federal funding must take reasonable steps to accommodate patients who can’t speak English well.

State policy helps determine who gets interpretation and translation help. Only 15 states directly pay for interpreters needed by Medicaid patients. California isn’t one of them, although a 2009 task force created by the state Department of Health Services recommended the change. (California does require private health insurers to provide — although not necessarily pay for — language services. The state also requires health plans in its state Medicaid program, Medi-Cal, to translate certain written materials into common languages.)

Most Salud Clinic patients have a Medi-Cal insurance plan that will cover the cost of interpretation, Donna Paul, the clinic manager, says. If a patient doesn’t have coverage, CommuniCare Health Centers absorbs the cost.

Then there’s the need to navigate cultural differences. The front-office staff knows that Southeast Asians may be uncomfortable making direct eye contact, and that Russians may speak loud and fast, Paul said. They’ve learned not to take such things personally.

African-Americans, and in some cases Hispanics, tend to receive lower-quality care than whites even after controlling for income, age and symptoms, according to an often cited 2003 report by the Institute of Medicine (now the National Academy of Medicine). Black patients are less likely to be prescribed pain medication than white patients, for instance, and less likely to receive antiretroviral drugs if they’re HIV positive.

There’s no simple reason for the gap in quality, which still persists, although researchers say unconscious bias or stereotyping by physicians, cultural and language gaps, and even geography play a role. “Race and ethnicity matter, whether you like it or not,” says David Acosta, associate vice chancellor for diversity and inclusion at the University of California, Davis, health system.

To erase the gap, medical schools are adopting strategies to better prepare the next generation of doctors. One of these is to recruit and train more minority students. The second is to train all students to examine their own biases and be more sensitive to cultural differences.

In California, where almost 40 percent of residents are Latino, 4 percent of physicians are. Nearly 20 percent of all physicians in the state speak Spanish, but Acosta says bilingualism isn’t enough. As a Latino physician, he says he’s bilingual and bicultural, familiar with his Hispanic patients’ approach to health, such as the folk remedies they might try. That kind of cultural match improves trust between doctors and patients.

The UC Davis program, called Prep Médico, is aimed at undergraduates from northern and central California and starts with a summer session at the UC Davis medical school. Participants get ongoing support from mentors, access to research opportunities, and help studying for the medical school admissions exam.

Once students reach medical school, they need to be trained to treat patients of a different race, ethnicity, culture, sexual orientation or socioeconomic status than their own. Twenty-one states, including California, have adopted health equity standards that help guide physician training.

But there’s a debate over how best to teach so-called cultural competency. The concept is often presented to students like another task to master or acronym to memorize, said Jann Murray-García, an assistant adjunct professor at UC Davis’ school of nursing. But it’s not something you can memorize with flashcards.

“There’s just no way to master the complexities of other people’s lives and personhoods,” she says. And recognizing one’s own racial biases and stereotypes, and learning how to deliver good care despite them, can be a lifelong process, she says.

Kaiser Permanente has turned to data, to make sure these new populations are getting the care they need.

For more than a decade, the organization has broken down its quality of care data by race, gender and ethnicity and used it as a guide to drive health care priorities, with a goal of narrowing health care disparities.

For example, African-Americans are more likely than whites to have very high blood pressure and — partly as a result — to suffer from strokes, heart disease and end-stage kidney disease. First, Kaiser’s analysts figured out what the gap looked like for their own patients. Then they created a new set of instructions for care teams, informed partly by patient focus groups.

Among other changes, physicians were asked to prescribe African-Americans medications proven to be more effective for them. Physicians, nurses and other health workers took additional care to listen to patients, follow up, and nudge them to stay on top of their treatment plan. The effort has paid off: Since 2013, Kaiser has cut the high blood pressure control gap between its African-American and white patients in half.

Health systems can use data to improve their language services, too, says Glenn Flores, a physician and chair of health policy research at Medica Research Institute, a nonprofit research group. All it takes is asking new patients a few questions to check their English fluency, and noting what other languages they speak. That way clinics and hospital systems can arrange for in-person interpreters ahead of time for patients who need them and figure out which languages are essential when they are hiring staff or contracting for medical translation services. “Very few hospitals around the country do this,” he says.

People with origins in the Middle East have no U.S. Census designation of their own, and can self-identify as white, Asian, African or “other.” Without more specific data, it’s hard to know what problems local communities have and what services they need, Ko Chin says.

California policymakers have unusually detailed data at their fingertips thanks to the California Health Interview Survey, conducted by the University of California, Los Angeles. Researchers have been able to tease out findings that can inform better care, such as the fact that Korean women are much less likely to receive mammograms than Japanese women in the state.