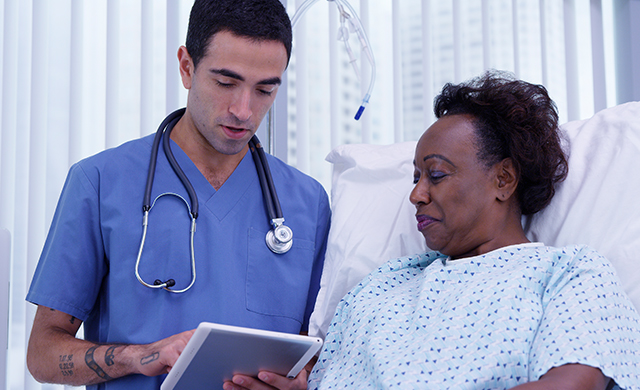 A patient suffered headaches, a "swooshing" sound in her ears and spots in her vision.

Ameerah Bond was just 20 and in college when the odd symptoms started. There were headaches that no medication could touch. An odd swooshing sound in both ears beat in time to her pulse. “It would get louder and louder to the point where I couldn’t sleep,” she said.

Even more frightening were the little dark spots in her vision, which was otherwise so good that she didn’t need glasses.

She had no idea that the 50 pounds she had gained after a serious car accident in mid-2017 put her at risk for a rare, dangerous condition that can damage the vision of young women.

When Bond finally saw her pediatrician, the doctor made it clear that the situation was serious. “You have to see the eye doctor,” she said. The eye doctor said, “You need to get in touch with a neurologist now.”

Bond, now 24, learned she had idiopathic intracranial hypertension (IIH), which is also called pseudotumor cerebri. She would need to take medicine and lose weight or risk blindness. Luckily, that worked — for a while. Like many, she put on some pandemic pounds. The symptoms came back. Now she’s on medication again.

For all the bad things that we know excess weight can do to a body, most overweight people have probably never worried that they could lose their sight in their 20s or 30s.

But IIH is strongly related to obesity and quick weight gain. It mostly affects women of childbearing age — 20 to 50 — but men and children can also get it. A new study from Penn Medicine has found that it is more common among Black and Hispanic women and that patients diagnosed with IIH were more likely than other ophthalmology patients to live in food swamps, or neighborhoods with abundant sources of junk food and fast food.

The cause of the condition is unknown (hence the “idiopathic” in the name), but doctors who treat it say IIH has increased along with America’s average waistline.

“One of the drivers is likely the obesity epidemic,” said Andrew Lee, a neuro-ophthalmologist who is chair of ophthalmology at Blanton Eye Institute at Houston Methodist Hospital and a clinical spokesman for the American Academy of Ophthalmology. “We are seeing more patients every year.”

Doctors said weight gain during the pandemic may have led to a small increase in cases in recent months.

What role do neighborhoods and race play?

Ali Hamedani, a neuro-ophthalmologist, epidemiologist and health services researcher at Penn, said IIH is common in practices such as his, where six doctors see about 200 new IIH patients a year. He was interested in social determinants of IIH and wondered whether access to healthy food played a part. He and a Penn team set out to see whether their patients with IIH were more likely than others who came to the specialty practice to live in food deserts — neighborhoods without easy access to grocery stores that carry healthy products — or food swamps — neighborhoods replete with fast food restaurants and corner stores. The study analyzed data from 5,000 neuro-ophthalmology patients, including 223 with IIH.

To their surprise, food deserts were not an important factor. Hamedani, who is Bond’s doctor, said Philadelphia doesn’t actually have many of those. They are more common in outlying areas. But patients who lived in food swamps were 50% more likely to have IIH. The hotspots were in West and North Philadelphia.

According to the U.S. Centers for Disease Control and Prevention, 57% of Black women are obese, compared to 44% of Hispanic women and 40% of white women.

In previous studies, Black women have been found to experience faster progression and more vision damage.

Hamedani doubts that Black and Hispanic women are somehow genetically predisposed to IIH. More likely, he said, the numbers reflect social factors such as access to healthy food, time to exercise, or quick access to medical care.

Bond, who now lives in Overbrook Park, lived in Frankford when she first got sick. There were lots of fast food restaurants and corner stores near her, and she frequented them when she didn’t feel like cooking. She’d order chicken fingers and fries, hoagies and pizza.

Noel Maldonado, a Wills Eye Hospital patient, said Hamedani’s description of food swamps sounds like Pleasantville, N.J., where she grew up and lived when she was diagnosed with IIH in 2016. “It was always easy to get junk food,” she said. She now lives in Mays Landing, but still finds it a challenge to eat healthy food. She recently had a recurrence and is losing weight slowly.

Maldonado said she and other Black women she knows grew up eating high-calorie mac and cheese and fried foods. “Everything’s almost like a feast all the time,” she said. Her husband’s Puerto Rican family also tends to celebrate with unhealthy fare.

“That’s how you show your love to other people, by feeding them,” she said. “It’s hard to make those changes.” She said it’s helpful to see more Black people on television talking now about veganism and healthy eating.

Idiopathic intracranial hypertension arises when pressure in the cerebrospinal fluid that surrounds the brain becomes too high. This causes headaches that often get worse when patients lie down. Patients may also experience a whooshing noise in their ears. And the pressure can damage the optic nerve, causing people to see blind spots when they change position or have blurry or double vision. They might not notice that their peripheral vision is narrowing. “We’ve seen way too many cases where visual loss was unrecognized,” said Grant Liu, who treats both adult and pediatric IIH patients and is chief of neuro-ophthalmology for Penn Medicine.

The damage usually progresses slowly, but can sometimes be rapid. “There are some people that present, and within a week or so they’re blind,” said Mark Moster, a neuro-ophthalmologist at Wills Eye. Quick treatment is important because nerve damage can be permanent and glasses won’t help.

“The earlier we catch it and treat it, the less there is a risk of any permanent effects on vision,” Hamedani said.

The symptoms can mimic those of brain tumors and blood clots in the brain, so an IIH diagnosis can sometimes be a relief, Moster said.

While obesity is clearly an important risk factor, only a small number of obese women get IIH, so more must be at work. Because IIH becomes less common once women are in their 40s, “we think there’s going to be a hormonal aspect to it,” Liu said. “There might be a slight genetic component.”

Abhay Moghekar, a neurologist at Johns Hopkins Hospital who specializes in treating cerebrospinal fluid (CSF) problems, said IIH likely occurs when multiple factors interact. Hormones may make blood vessels more susceptible to spinal fluid pressure. Alternatively, obesity can make women produce more of the male hormones androstenedione and testosterone. They can cause the brain to produce more CSF and that can increase pressure in the skull. It is a mystery why these hormones don’t cause the same problem in men, Moghekar said.

Most doctors think the bigger problem is that people with IIH make the right amount of CSF, but that it doesn’t drain from the skull properly. CSF normally is absorbed into veins inside the skull through one-way valves. In some cases, key veins are narrowed by these valves, which slows absorption. And obesity can increase pressure on veins in the chest and neck, making it harder for fluid in the brain to flow out, Moghekar said.

Treatments such as vitamin A (Bond was taking it for a concussion after the auto accident) and tetracycline, an antibiotic, can also cause IIH. Moster said doctors will sometimes see patients who’ve only gained a little weight but are also taking vitamin A and the antibiotic. Stopping those will often make the symptoms subside.

The first line of treatment is acetazolamide, a diuretic that also reduces production of CSF, and weight loss. Losing 10% of body weight usually relieves symptoms. “When there’s a threat of vision loss, there are a lot of people who realize that’s something I need to address,” Liu said. For those who can’t lose weight on their own, weight loss surgery has been found helpful. Surgeons may also implant shunts to drain extra CSF or do a procedure called optic nerve sheath fenestration, which directly reduces pressure on the optic nerve, Moster said.

Increasingly, Moghekar said, doctors also are using stents that widen narrowed vessels. Johns Hopkins became the first U.S. hospital to use the treatment in 2008 and has now inserted almost 200 stents.

One downside of stents is that they are typically available only in large medical centers, Lee said.

Bond has been lucky that she responds to acetazolamide. Now 17 weeks pregnant, she has to be careful about how much weight she gains. First-trimester nausea made that easy. “When I go food shopping, I buy a lot of fruit and vegetables, because it seems like that’s the only thing the baby likes,” she said.

She is not upset that she has an unusual obesity-related complication. “I’m glad that it was this and not something more serious like diabetes or heart disease or something,” she said. “It’s something that I can actually reverse the symptoms and get rid of.”