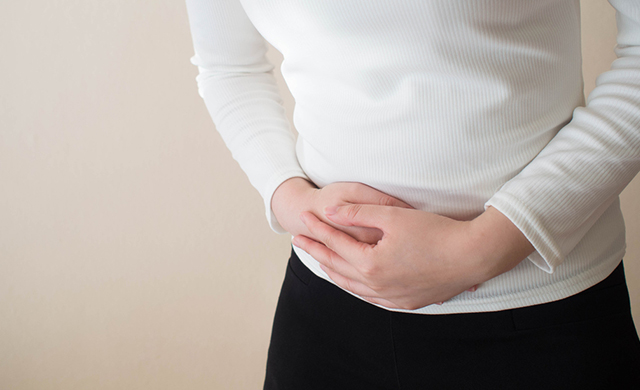 Photo by Orawan Pattarawimonchai/Shutterstock.com
By Jennifer Huizen
It is often difficult to diagnose ovarian cancer in its early stages because the symptoms are similar to those of other conditions. Anyone who experiences unexplained abdominal symptoms that last for more than 2 weeks should see a doctor.

can also be challenging to detect early because the ovaries are small and located deep in the abdomen, making any growths that might be on them hard for a doctor to feel.

According to the National Ovarian Cancer Coalition (NOCC), only around of ovarian cancer is diagnosed in the early stages.

Ovarian cancer does not cause any noticeable symptoms in the early stages.

The symptoms most associated with ovarian cancer tend to develop in the later stages of the condition, as growths put pressure on the bladder, uterus, and rectum.

However, these symptoms of ovarian cancer can develop at any stage of the condition and include:

These symptoms can be due to a variety of other conditions, which will often respond to basic treatment or go away on their own.

However, if these symptoms develop suddenly and persist, or continue more or less daily regardless of basic treatment, see a doctor for a diagnosis as they might be symptoms of ovarian cancer.

When to see a doctor

Because it is difficult to diagnose ovarian cancer at an early stage, most health authorities suggest that the best way to help reduce the chances of developing more advanced stages of ovarian cancer is by taking a positive, proactive approach to the disease.

To ensure the very best outcome, a person should talk to their family doctor or the gynecologist about any potential symptoms as soon as possible.

Signs can include any unexplained symptoms of ovarian cancer, or any new abdominal or pelvic symptoms, that:

Risk factors that may make some people more likely to develop ovarian cancer than others include:

People with a family history of reproductive or gastrointestinal cancers should talk with their doctor or gynecologist about undergoing genetic counseling to test whether they carry specific gene mutations that may increase their risk of ovarian cancer.

Factors that may lower overall risk of developing ovarian cancer include:

Experiencing some of the symptoms associated with ovarian cancer does not mean that a person has the disease. Ovarian cancer cannot be self-diagnosed at home. Diagnosis requires a range of tests and usually the involvement of a specialist.

To diagnose ovarian cancer, a doctor will start by asking questions about symptoms including:

The doctor will go over a person's medical history and ask questions about their family history of cancer, especially any history of ovarian and breast cancer. The doctor will perform a pelvic exam to see if the ovaries are inflamed, enlarged, or if there is fluid in the abdomen.

A doctor will order additional testing if:

Before or after these tests, a doctor will refer the individual to a gynecologic oncologist — a doctor that specializes in treating cancers of the reproductive system. The oncologist will help a person decide the best way to proceed with treating and managing the condition.

The tests that doctors use most frequently to detect ovarian cancer initially include:

In this test, a doctor inserts an ultrasound probe into the vagina. The probe emits ultrasound waves that echo back, producing an image of the uterus, fallopian tubes, and ovaries.

This test can help identify potential growths and determine whether they are solid growths or cysts, which are non-cancerous, fluid-filled sacs.

If the doctor identifies a solid growth, they will probably request a biopsy to determine whether the growth is cancerous or benign (non-cancerous).

The CA-125 blood test measures the amount of the protein CA-125 that is in the blood. Many people with ovarian cancer have high levels of CA-125 in their blood.

However, those with other, less severe conditions, such as pelvic inflammatory disease (PID) and endometriosis, often have high levels of this protein in their blood, too.

CT scans involve passing special X-rays through the abdomen. A computer processes the results to create cross-sectional images that allow doctors to see sections of the abdominal cavity and pelvis.

A biopsy involves inserting a very fine needle into the body and withdrawing a small section of the growth or mass, which is sent to a laboratory to check for signs of cancer. The results of a biopsy are an essential element in making a final diagnosis of ovarian cancer.

Despite research efforts, there are currently no screening methods available to detect ovarian cancer in people who do not have any symptoms or who are not at a higher risk than usual for developing the condition.

How likely is it that symptoms indicate cancer?

Ovarian cancer is a relatively rare form of cancer, representing an estimated 1.3 percent of all cancer cases newly diagnosed in 2018 in the United States. This means that the symptoms associated with ovarian cancer are much more likely to be caused by other, far less severe conditions than ovarian cancer.

Around 94 percent of people who receive a diagnosis and treatment of ovarian cancer in the early stages survive more than 5 years after diagnosis.

The death rate trends among those with ovarian cancer have been consistently dropping. The National Cancer Institute estimate that ovarian cancer will account for 2.3 percent of all cancer deaths in 2018.

Because symptoms of ovarian cancer have similarities to many other, usually less dangerous conditions, many women overlook the signs. Because the ovaries are located deep in the body, it is almost impossible, even for doctors, to feel small growths on the organs.

Anyone who has unexplainable pelvic or abdominal symptoms that are severe, last for more than 2 weeks, or do not go away with primary care should talk with their doctors as soon as possible.

It is also a good idea for those who have a strong family history of breast, ovarian, uterine, or colon cancer to talk to their doctors about undergoing genetic counseling.